On Monday, cryptocurrency prices remained bearish amidst a dramatic drop in LUNA and UST. The global cryptocurrency market cap was $1.30 trillion, up from $1.14 trillion. Total crypto market volume fell from $80.16 billion to $79 billion.

Nigeria's Securities and Exchange Commission has issued new rules to guide the issuance, custody, and exchange of digital assets and classify them as securities, which is a positive development in the crypto space. Nonetheless, the Terra ecosystem collapse remained one of the top stories in the previous week.

Maker (MKR), Pax Dollar (USDP), and Binance USD (BUSD) remained the top performers from the previous week. Maker increased by more than 29% to trade at $1,517.75, while Pax Dollar increased by 0.50% in the last seven days, maintaining a $1 peg. 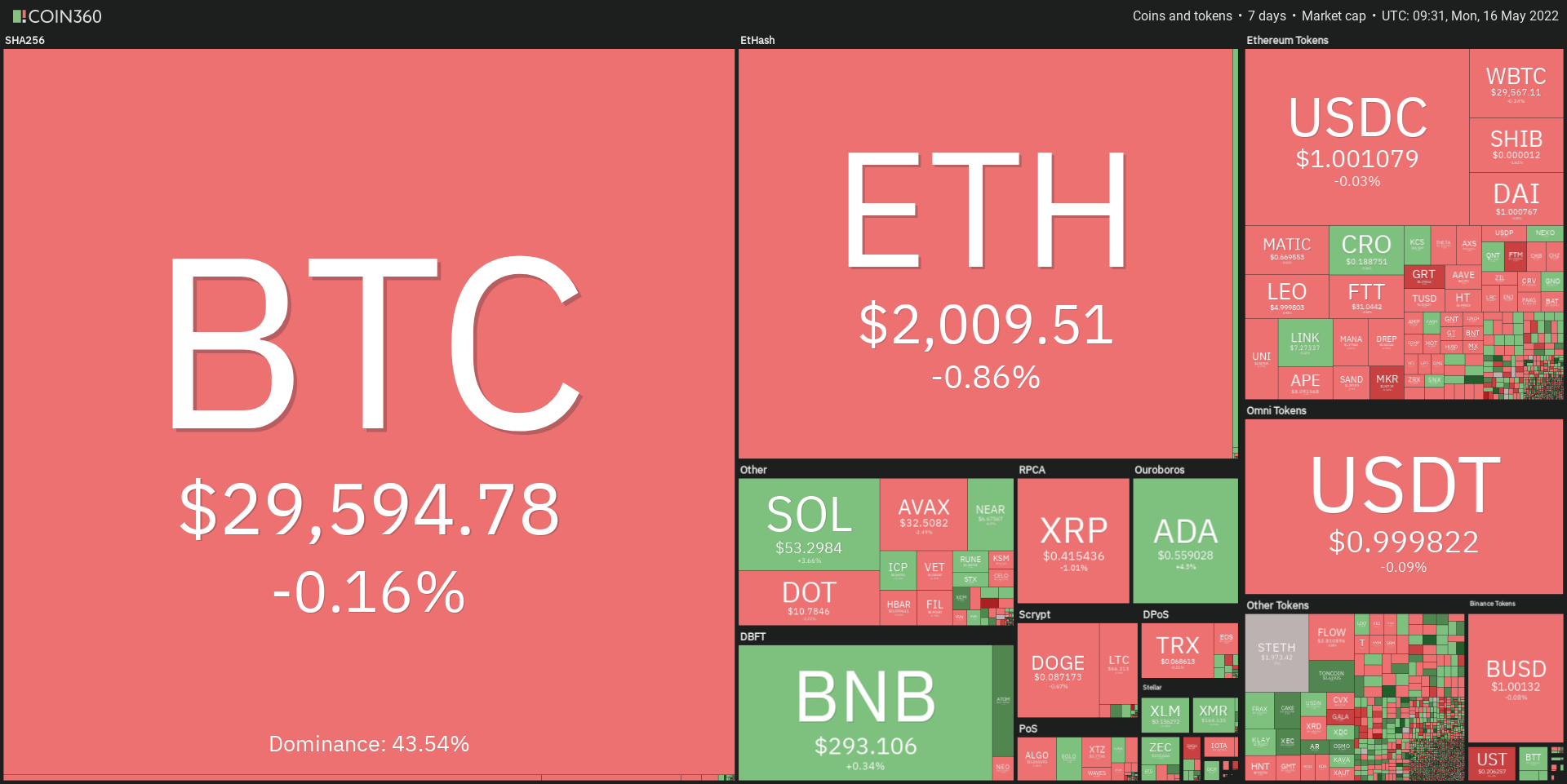 While TerraUSD (UST) experienced a massive plunge, losing 82.15% to $0.1779 and Waves (WAVES) lost 48% in the last seven days. The crypto market's trading sentiment has shifted negatively due to risk-off sentiment, and digital assets are struggling to rise.

If you haven't heard, TerraUSD (UST), a cryptocurrency that is supposed to remain stable at $1 (also known as a stablecoin), is no longer $1. It's usually a bad sign when a crypto token is supposed to be $1 but isn't. Furthermore, the LUNA crypto token, which underpins UST, has lost nearly all of its value. These losses have been widely reported, so this is likely the umpteenth piece about UST you've seen.

Sister asset TerraUSD, a so-called stablecoin designed to trade at around $1, broke its peg last weekend, falling to 16 cents, algorithms are supposed to help keep TerraUSD at $1, but the token uses luna as a stabilizing mechanism when the price deviates.

During the previous week, Terra (LUNA) prices fell to near $0.01. The LUNA token is currently trading at $0.0002426, down from $80 just a week ago. The platform behind the beleaguered luna cryptocurrency said that it had temporarily halted its blockchain to stop transactions after the token's price dropped nearly 100 percent overnight, making the network more vulnerable to an attack.

There are several stablecoins available, including tether (USDT), USD coin (USDC), Binance USD (BUSD), and Dai (DAI). Notably, we also had TerraUSD (UST). These are the five most valuable stablecoins, worth approximately $160 billion. These stablecoins are collateralized stablecoins issued by centralized entities (USDT, USDC, and BUSD). These entities own a treasury of dollars that back each coin, allowing the holder to redeem each coin for $1 from the issuer. However, it would be fair to say that such an incident has shaken investor sentiment.

Nigeria's Securities and Exchange Commission has made new rules about how digital assets can be issued, stored, and traded. The central bank of Nigeria prohibited banks and financial institutions from dealing in or facilitating transactions in cryptocurrencies last year.

On its website, Nigeria's Securities and Exchange Commission (SEC) published the "New Rules on Issuance, Offering Platforms, and Custody of Digital Assets." These rules classify digital assets as securities, which is a good thing for the crypto space. Such government action points to cryptocurrency acceptance and, as a result, helps to support cryptocurrency prices.

Dogecoin Has Potential as a Currency, Elon Musk Says

All that the crypto market requires now is support from crypto influencers such as Elon Musk. So, despite massive sell-offs in the cryptocurrency market, Tesla CEO Elon Musk has issued another bullish statement about the meme cryptocurrency dogecoin (DOGE).

Musk stated that dogecoin "has currency potential." His tweet responded to a comment by dogecoin co-creator Billy Markus, who noted that the meme cryptocurrency appeals to him because "it knows it is stupid."

Elon Musk, the CEO of Tesla, reaffirms that Dogecoin "Has Potential as a Currency" as the Twitter deal is put on hold. The Tesla CEO's tweet reiterated his previous claim that DOGE is the best cryptocurrency for transactions.

On the other hand, he believes Bitcoin is better suited as a store of value. Musk, also known as the Dogefather in the crypto community, stated that dogecoin is "the people's crypto." Elon Musk, a long-time supporter of DOGE, tweeted in April 2019: "Dogecoin may be my favorite cryptocurrency." It's cool." In addition to bitcoin and ether, Musk revealed that he owns dogecoin.

Despite Musk's upbeat tweet, the cryptocurrency market is still struggling to recover, but he has provided some encouragement.

While Indian investors are disappointed by crypto taxes, the German Ministry of Finance has issued an official letter confirming that the sale of crypto assets after one year is tax-free, even if the coins are used for staking and lending. According to the finance ministry, one of the most heatedly debated issues at a hearing last year was whether the tax-free holding period for crypto lending and staking should be a minimum of ten years.

According to the ministry, in collaboration with the federated states: “The letter now states that the so-called 10-year period does not apply to virtual currencies.” This could be another factor to drive demand in the cryptocurrency market.

Changes are made on a regular basis to improve network performance or to correct errors. A hard fork is incompatible with previous versions of programs that support the cryptocurrency network, and miners must update their software to continue mining cryptocurrency.

In some cases, a completely new cryptocurrency may emerge due to a hard fork, as happened with Bitcoin Cash.

As investors seek to invest in risk-free securities rather than risky assets such as stocks and cryptocurrencies, the market's trading sentiment has shifted to bearish or risk-off. As discussed in last week's weekly report, companies using debt financing must pay higher interest rates as interest rates rise, reducing their profitability. As a result, investors seeking dividends or capital gains typically sell securities or stocks on the stock exchange.

The market's risk-off sentiment has triggered extreme risk in the market. As a result, the fear and greed index shows extreme fear, indicating that cryptocurrency traders' bearish bias is weakening. Extreme fear can mean overly concerned investors and oversold cryptocurrency markets. Typically, this is when investors look for a buy entry as the coins are already cheaper. So, look for buying opportunities as the bulls are expected to enter soon.

Bitcoin is currently trading at $29,600, with a trading range of $33,150 to $28,040. Overall, the strong bearish bias in the leading cryptocurrency appears to have abated, with the BTC/USD forming neutral candles.

On the daily timeframe, the BTC/USDT has formed a Doji candle and gained support at the 28,000 level. A Doji candle followed by a strong bearish price action typically indicates a weakness in selling pressure and a potential bullish reversal.

The RSI and MACD are holding under 50 and 0, respectively, indicating a selling trend. The RSI, on the other hand, has bounced off after testing 20 levels, indicating a possible reversal. As a result, an increase in Bitcoin demand and a breakthrough $33,1050 resistance exposes the BTC price to $37,500 resistance.

The downward trendline and EMA series are adding to the selling pressure on BTC/USD. On the downside, the leading cryptocurrency, Bitcoin’s immediate support stays at the $28,000 level. A decline in demand and a bearish break below $28,000 expose Bitcoin to a $24,350 support level.