The euro is under pressure and is trading at 1.0557, down 0.58% on the day. This follows a spectacular session on Wednesday, when EUR/USD jumped 0.94%, its best one-day showing since March.

German factory orders plunged 4.7% MoM in March, after a decline of 0.8% in February. The sharp drop caught the markets off guard, as the consensus estimate stood at -1.1%. The weak release reflects ongoing difficulties for the manufacturing sector, which is grappling with supply chain disruptions and higher costs. The harsh Covid lockdowns in China are likely to exacerbate the situation, as almost half of German companies rely on imports from China, according to an Ifo survey.

Germany’s economy will have another headache to deal with, as the EU has confirmed that it will terminate all imports of Russian oil by the end of the year. Germany had originally opposed this move, since it imports 25% of its oil requirements from Russia. The German government is now saying that it can manage without Russian oil, but it’s clear that the move will boost inflation, dampen growth and could even push the economy into a recession.

There were no surprises from the Federal Reserve meeting, as the central bank raised rates by a half-point, the largest increase in 20 years. The Fed signalled that it will deliver additional half-point hikes in June and July, with Fed Chair Powell stating that the FOMC was not “actively considering” a 0.75% increase. This news sent the US dollar broadly lower, although I expect the greenback to resume its upswing without much difficulty.

The Fed is also implementing quantitative tightening with a reduction in the balance sheet. Starting in June, the Fed will sell USD 45 billion/mth in assets, which will climb to USD 95 billion/mth in September. The financial markets reacted positively to the Fed’s moves, as investors believe that the Fed’s rate hikes can curb inflation while ensuring a soft landing for the economy and avoiding a recession. 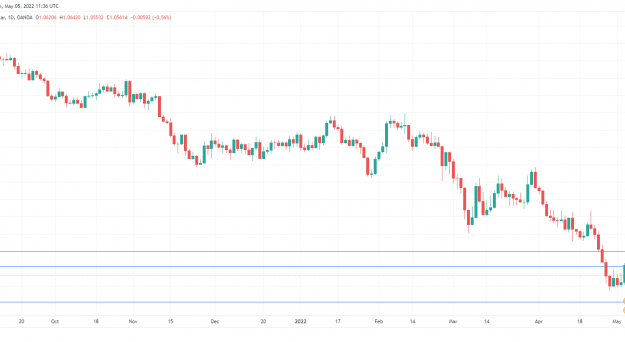