The Canadian dollar is drifting just above the 1.28 line, but that could change in the North American session, with the release of Canada’s retail sales for March. The headline figure is expected to jump to 1.4% MoM, after a negligible gain of 0.1% in April. Core retail sales is projected to come in at 2.0%, little changed from the previous reading of 2.1%. A stronger-than-expected reading would likely boost the Canadian dollar, while an underperforming release would raise questions about the recovery and could push the currency lower.

The FOMC minutes, released on Wednesday, didn’t contain any surprises, which was just fine as far as the markets were concerned. Investors have become increasingly nervous over the spectre of a recession in the United States. Recent data is pointing to a possible slowdown, at the same time that the Federal Reserve has embarked on an aggressive rate-hike cycle which will slow the economy.

With inflation still not showing signs of peaking, there have been calls from some Fed officials to deliver a super-super-size 75 bps hike. To the relief of the nervous markets, the minutes appeared to put to rest that drastic scenario, as the Fed signalled that it will hike by 50 bps in June and July, followed by a pause in September. This would allow the Fed to monitor the effects of the June and July hikes on the economy and whether inflation is finally easing.

Read next: Altcoins: Tether (USDT), What Is It? - A Deeper Look Into The Tether Blockchain| FXMAG.COM

The US dollar showed modest gains after the minutes were released, but we are seeing limited movement across the majors today. The dollar index rose slightly to 102.07, but has retreated to 101.83, as resistance at the multi-year breakout line of 102. 35 held firm. There is support at 101.50 and 101.00. 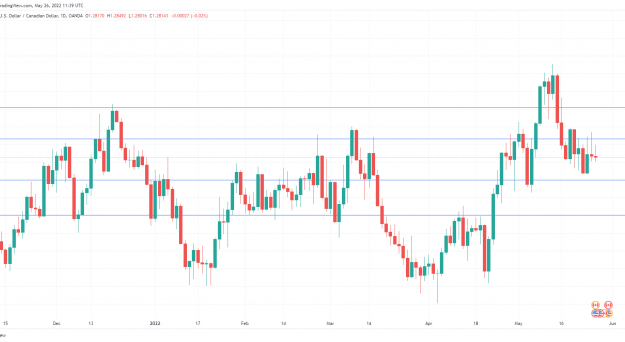