Will Bitcoin's Situation Improve? The First Signal For A Gradual Stabilization

The cryptocurrency market and Bitcoin are entering another phase of a bear market. The capitalization of all digital assets once again dipped below $1 trillion, which indicates a decrease in buying activity and aggravation of short-term negative factors. Despite this, Bitcoin managed to realize a local bullish momentum and gain a foothold above $19.1k. The bullish rebound of the cryptocurrency once again proved the powerful foundation of Bitcoin. 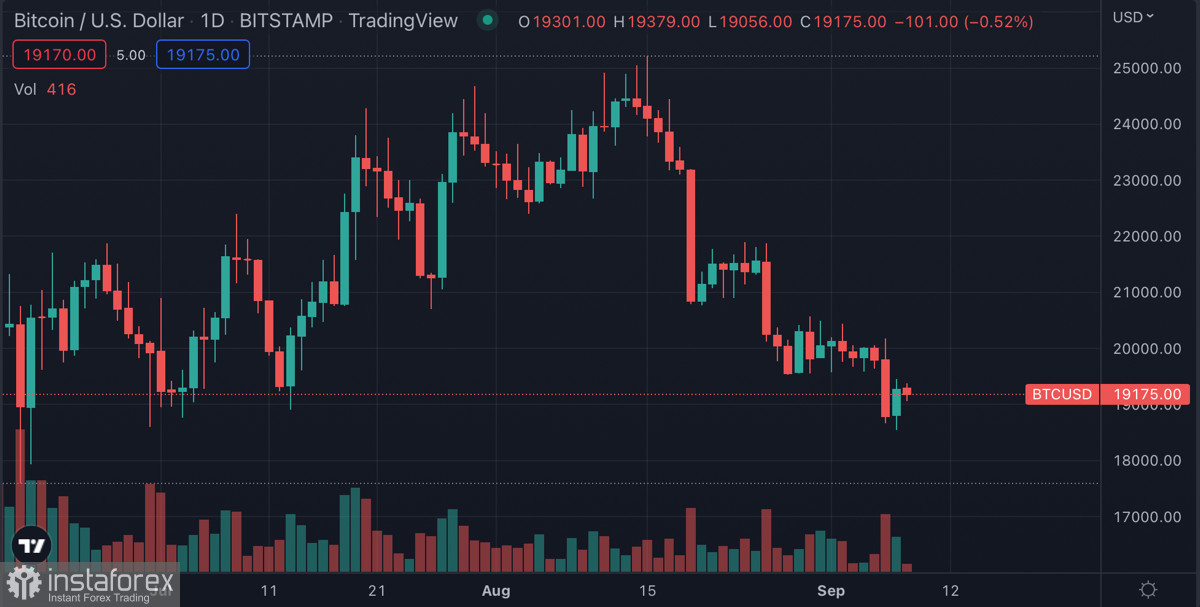 The main cryptocurrency fell to the lower limit of the $18.5k support level, but subsequently the buyers did not let the price go lower. As a result, Bitcoin formed a green candle and settled above $19k. In the local perspective, this is a positive moment, which will delay further price reduction. At a distance of 7–10 days, the rebound of the cryptocurrency is not of fundamental importance, as the situation remains bearish. The green candle following the results of September 7, was unable to absorb the volumes of sellers. Technical metrics confirm that the bears have the initiative. The RSI and Stochastic tried to realize a bullish momentum, but in the end, the metrics reversed under the pressure of the sellers. 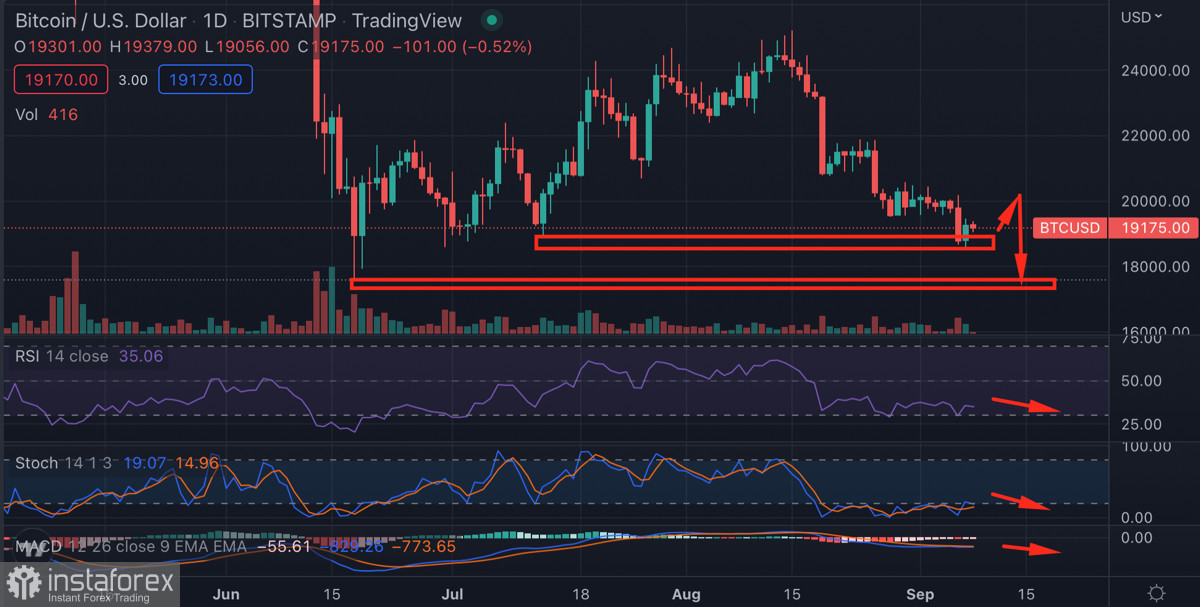 On the daily timeframe, we see how the price of Bitcoin is gradually approaching the assault on the final support segment of $18.5k–$19.1k. BTC/USD quotes have completed the first spike at the $18.5k level. Most likely, over the next few days, we will see a retest of the support area. The next stage of the price fall will provoke a news background that risks confirming the pessimistic expectations of the market. Despite this, many analysts point out that Bitcoin is showing a high level of resilience in the current bear market. This indicates a high level of fundamental interest in Bitcoin, which can soon change the situation for the better. 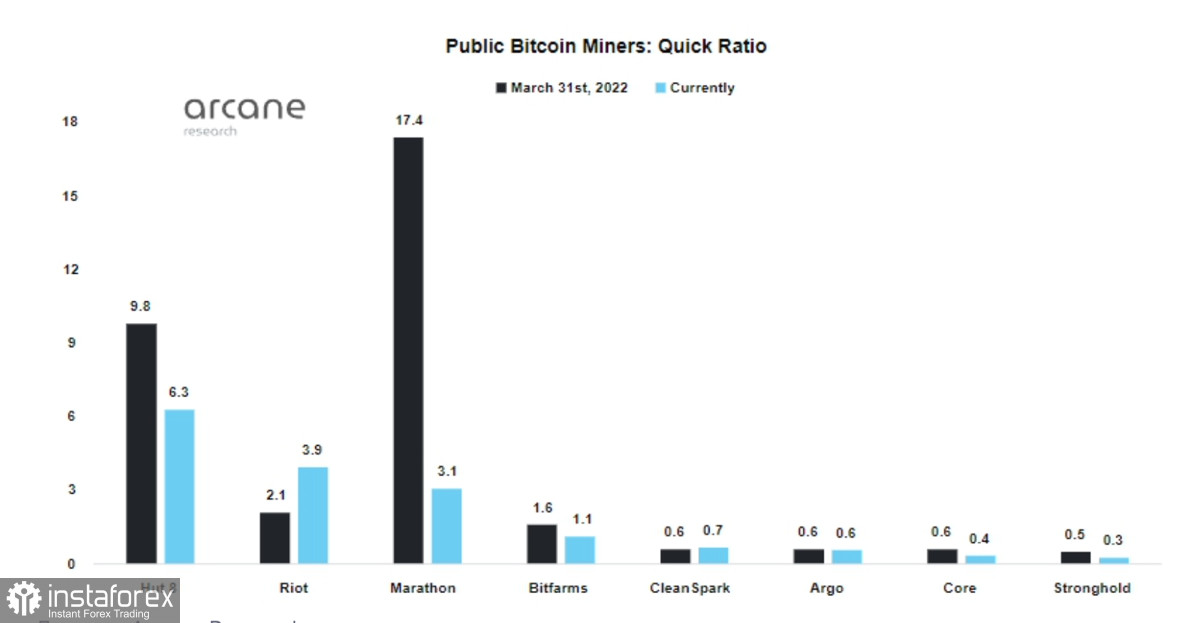 The first signal for a gradual stabilization of the situation was the unexpected conclusions of Arcane Research about the financial stability of public mining companies. Analysts have confirmed that the majority of miners are facing financial difficulties due to the energy crisis as well as the fall in the price of Bitcoin. However, thanks to large stocks of cryptocurrencies and financial reserves, mining companies survived. As of September 8, none of the public miners have filed for bankruptcy. Given this fact, as well as the gradually growing Bitcoin hashrate (+9% in August), Arcane concluded that the worst period for miners is over. In addition to the hashrate, this is evidenced by the positive dynamics of the growth of reserve volumes of mining companies.

The improvement in the situation of mining companies was largely due to the constant sale of BTC coins for liquidity. At the moment, this process exerted strong downward pressure on the price of the cryptocurrency. If you look at the situation in the long term, then the sale of miners is a logical and healthy process of transferring coins to long-term investors. This is the process we have been observing for the last three months. During this period, the number of wallets with 0.1–10,000 BTC updated absolute highs, confirming the active period of accumulation, which is typical for Bitcoin corrective cycles. There is also an active decrease in the balances of BTC coins on crypto exchanges. 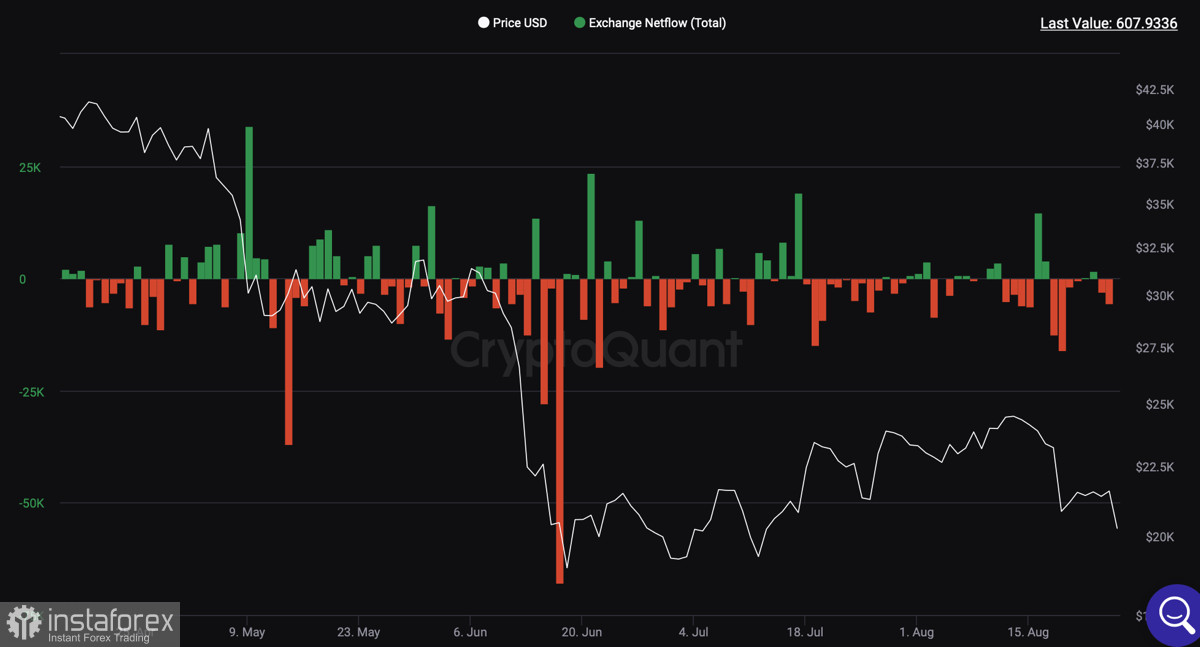 Now we are approaching an ambiguous factor that can have a different effect on the capitalization of Bitcoin. The Fed's hawkish policy raises more and more questions within the US and provokes a recession in the US economy. At the same time, inflation remains high, and the department's goal, according to Powell, remains around 2% per annum. Fed officials have also repeatedly stated that they will maintain the agency's current course until significant results appear. This suggests that the situation will not change dramatically in the coming months. The positive here is the BBG study, according to which the market lays a 70% chance of a 75 basis point rate hike in September. 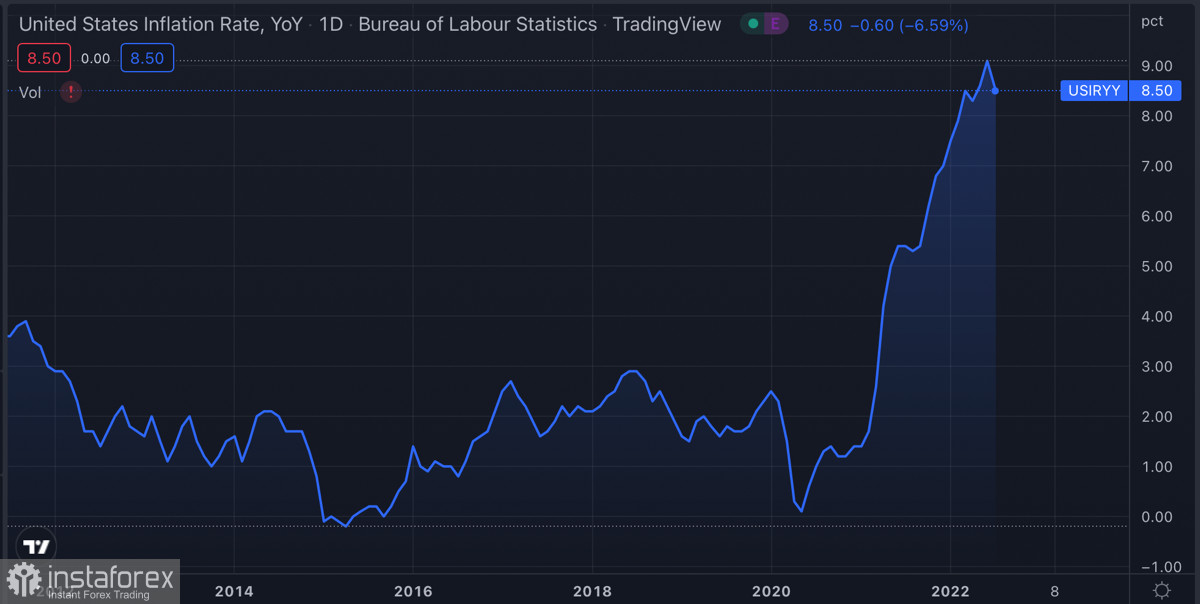 The market has adapted to the shock therapy from the Fed, and therefore we should not expect a significant increase in volatility during this period. Despite the leveling of local problems with the fall of markets, the global situation does not change. The liquidity crisis complicates the situation for the entire industry, and therefore there is no reason to count on the growth of capitalization. Given the rate of inflation decline, as well as the current level of the key rate, the situation will begin to change dramatically in November 2022.

The catalyst for the growth of Bitcoin and the cryptocurrency market will be the elections to the US Congress. Most analysts are inclined to believe that the government will inject liquidity into the markets to improve economic health before a major political event. In addition, by November, the rate will remain at a high level for quite a long period of time, which suggests an increase in the rate of decline in inflation. Given these factors, we can assume that the first thaw after the crypto winter will occur in November. However, it is still too early to judge its fundamental impact on the cryptocurrency market due to insufficient statistical data.

Relevance up to 10:00 2022-09-09 UTC+2 Company does not offer investment advice and the analysis performed does not guarantee results. The market analysis posted here is meant to increase your awareness, but not to give instructions to make a trade.