The Situation Around ETH/USD Is Becoming More And More Bullish

The cryptocurrency market is approaching a controversial period—autumn. On the one hand, the market has cheered up due to the upcoming Merge update and the likely easing of monetary policy due to the US congressional elections in November. At the same time, Bitcoin has historically had a bad September. The probability of maintaining this trend increases significantly, given the high probability of a 75 basis point rate hike. Despite all the inconsistency of the situation, Bitcoin and Ethereum still have chances to spend September on a bullish note. 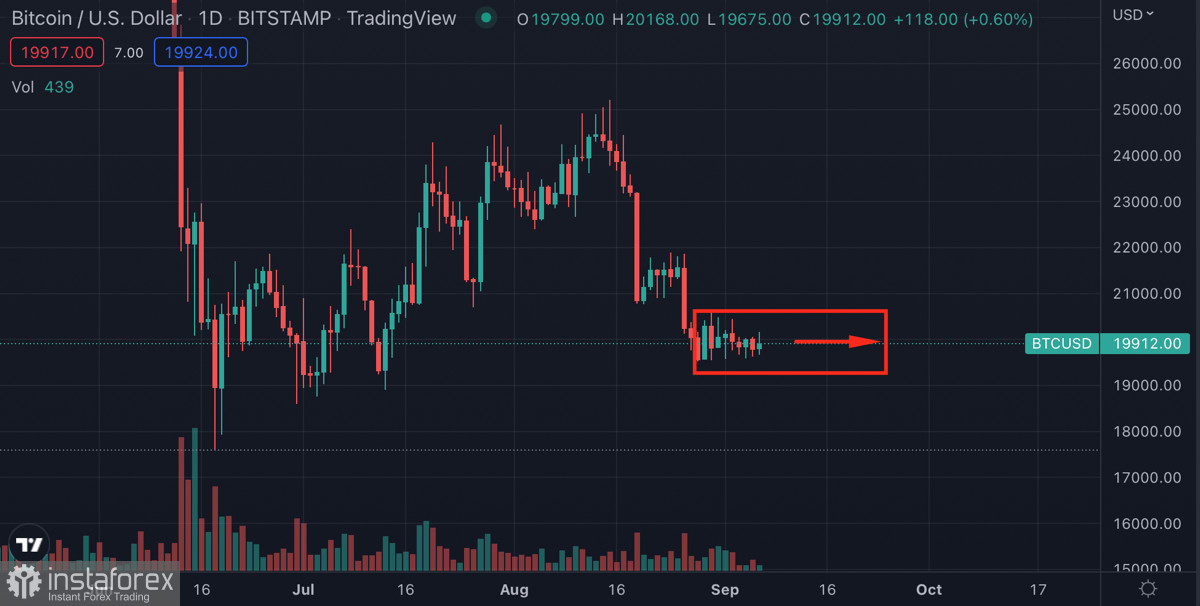 Bitcoin remains within the narrow range of fluctuations of $19k–$20k. The area formed after the breakdown of the key support level at $20.8k. Bearish pressure forced the cryptocurrency to move to the consolidation stage, but the process is moving very slowly. Glassnode experts note that BTC network activity is at a local low. Given the volatile nature of the upcoming economic events, the probability of an increase in trading volumes increases significantly. 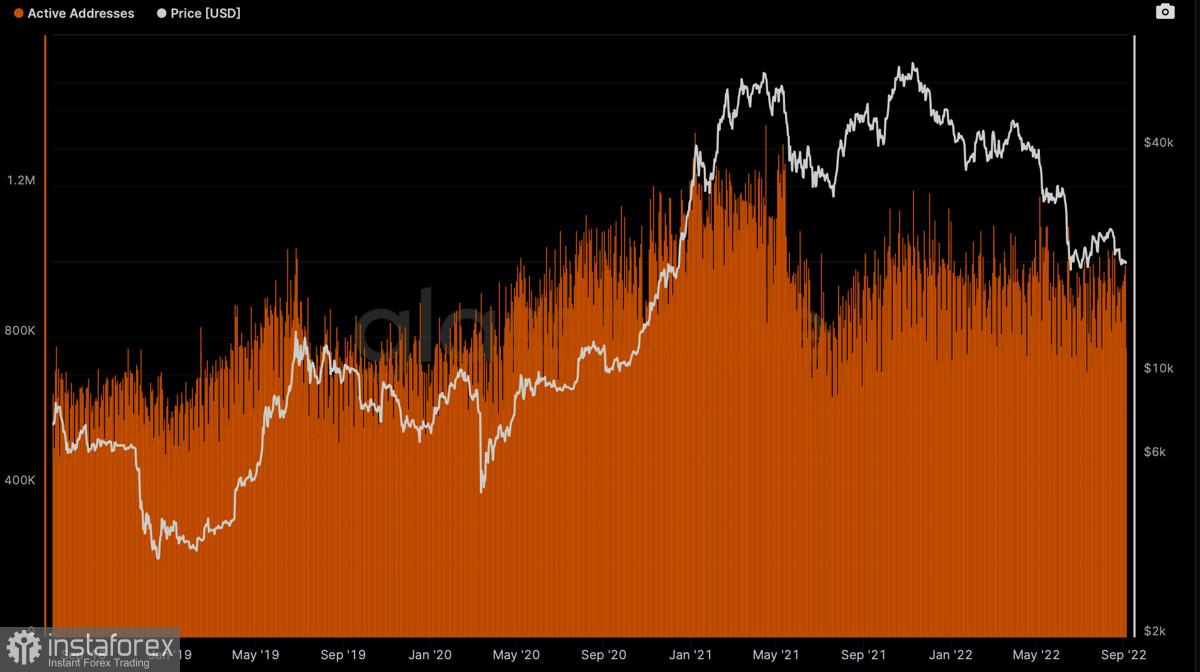 The current lull is also fundamental. Markets are pricing in a 70% chance of a 75 basis point rate hike in September, according to BBG analysts. On Thursday, Fed Chairman Jerome Powell will speak at the Cato Institute conference. Given the market reaction to the official's previous speech, there is every reason to believe that Powell will give the market clues about the Fed's next steps. Given the pessimistic expectations of the market, hints of a rate hike within 50 basis points could have a positive impact on the short-term prospects for the cryptocurrency market. 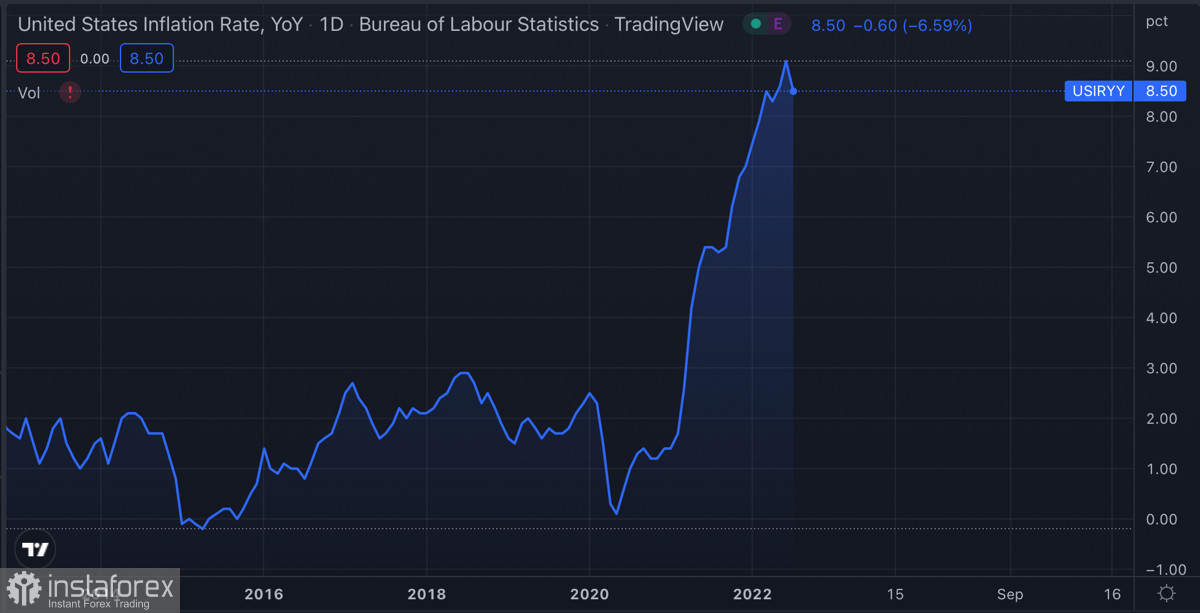 The ECB meeting will be the second major event on Thursday. The meeting of the Bank will consider the issue of the level of the key interest rate and the interest rate on the deposit line. Most experts are inclined to increase the indicator by 100 and 50 basis points, respectively. For the cryptocurrency market, this will be a negative signal, as it will untie the hands of the Fed and allow you not to look back at the position of the euro against the US dollar. For the most part, Thursday will show which direction the stock and crypto markets will move in the coming weeks. 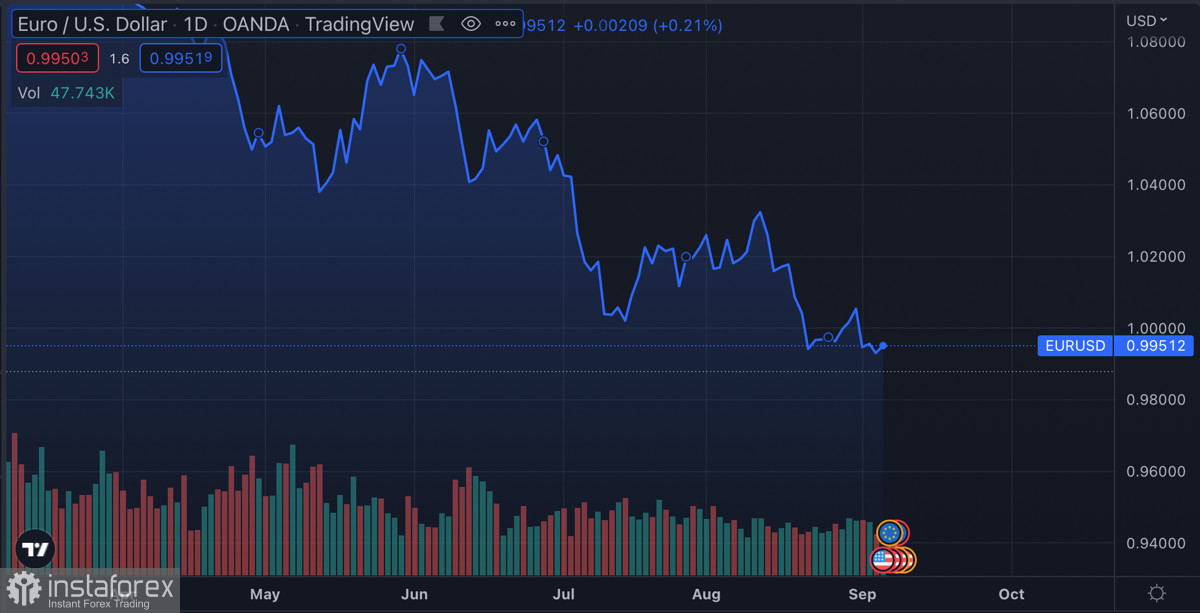 Technically, Bitcoin continues to trade sideways for the tenth day in a row. Trading volumes remain low, which does not allow one of the parties to take the initiative. Technical indicators continue to move sideways without the presence of impulse movements in any of the directions. At the same time, the stochastic oscillator once again tries to enter the green zone, forming a bullish crossover. However, given the trading volumes, this attempt will not be successful. With regard to BTC/USD, the bearish idea remains relevant with a gradual breakdown of the $19k–$19.5k support zone, after which the asset may retest the local bottom. As of September 6, Bitcoin does not have the potential to be bullish and consolidate above $20.5k. 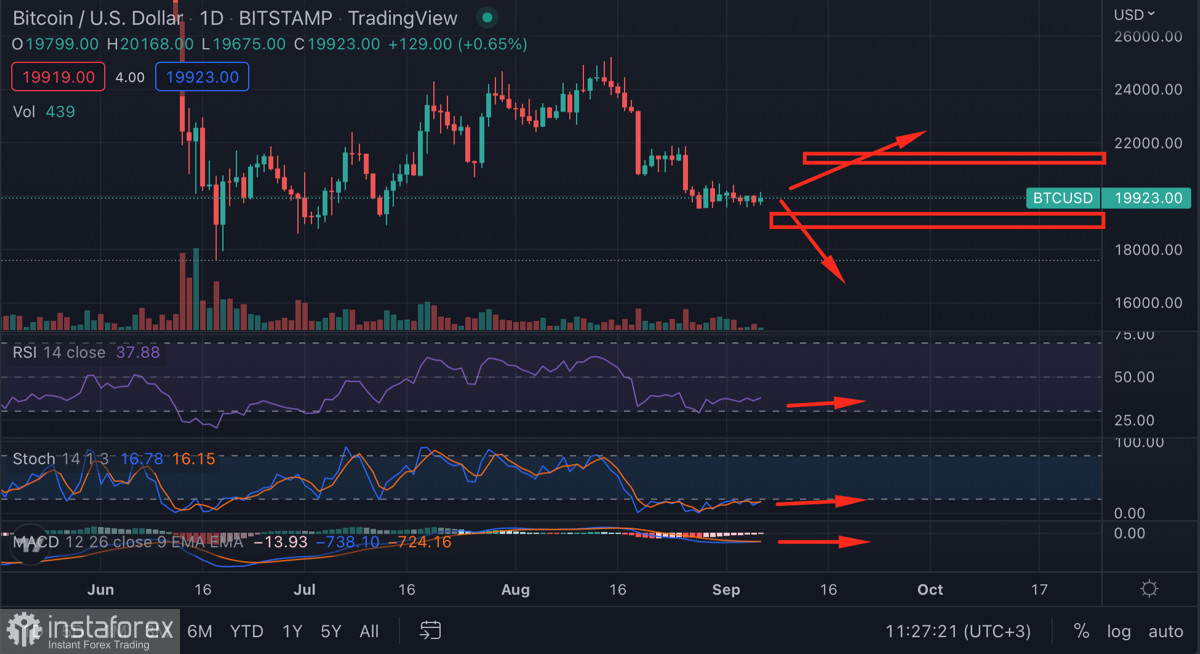 The long-awaited transition of Ethereum to the Proof-of-Stake algorithm begins today. Ethereum's bullish potential could increase significantly if the cryptocurrency manages to successfully complete the merger of networks as part of the first stage of the Merge. Against the backdrop of the process that has started, investor interest in ETH is starting to grow again. The cryptocurrency has successfully broken through the $1,600 level and continues its upward movement. Given the nervousness surrounding Ethereum's transition to the new algorithm, the importance of today's merger phase cannot be underestimated. If everything goes according to the planned scenario, then we can expect the continuation of the bullish movement to the $1,800–$2,000 range. 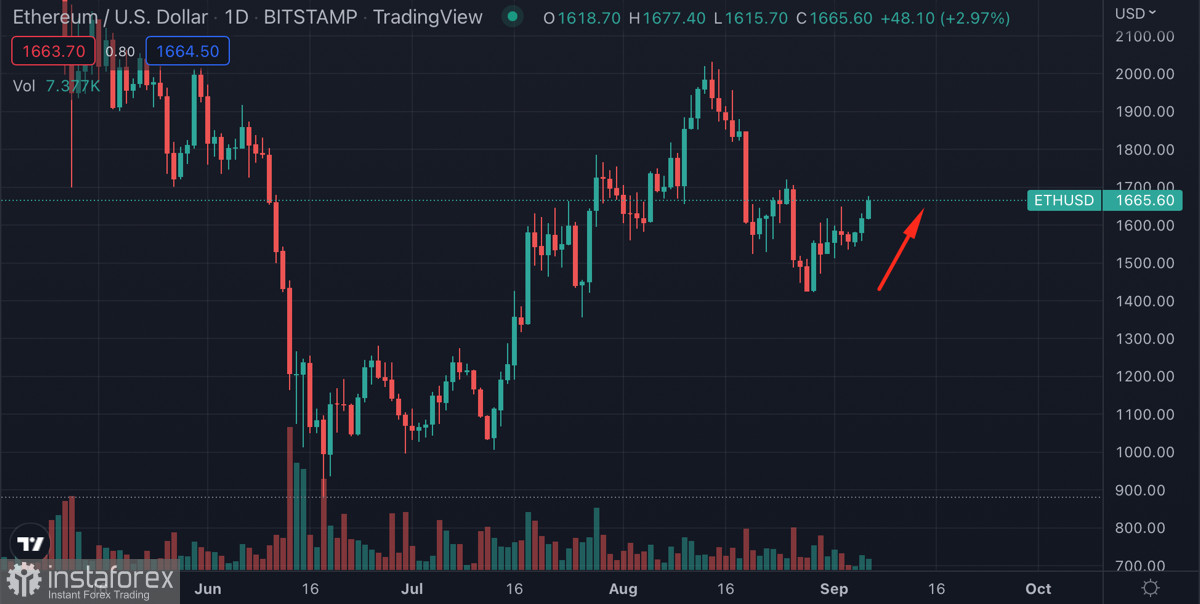 Ether's technical metrics support the thesis that the recent drop in Ether was a healing corrective move. As of September 6, the bullish mood of ETH investors is again showing an upward trend. The Relative Strength Index crossed 40 and continues to move upward, indicating growing buying power. The stochastic oscillator indicates a high level of bullish sentiment and a fast implementation of bullish patterns. 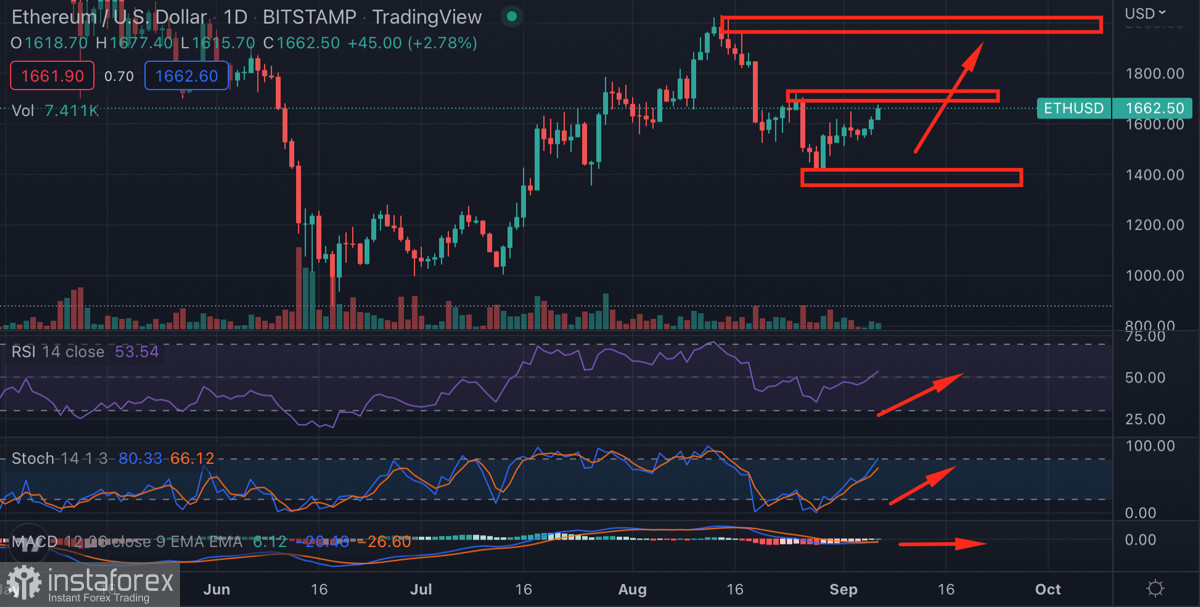 The situation around ETH/USD is becoming more and more bullish, and among the immediate targets of the asset, it is worth highlighting the range of $1,650–$1,700. If this area is broken, the price will go to the final resistance line for the last six months at $1,800–$2,000. These are the short-term goals of Ethereum with a favorable development of the situation. In the long term, the target of $2,800 remains relevant.

Relevance up to 10:00 2022-09-07 UTC+2 Company does not offer investment advice and the analysis performed does not guarantee results. The market analysis posted here is meant to increase your awareness, but not to give instructions to make a trade.