The Gold (XAU/USD) Has The Wrost Conditions, The Bulls Can Show Weakness

The "believe it or not" game ended badly for most financial assets, which turned a blind eye to the "hawkish" rhetoric of Fed officials. Yes, most of them did not indicate how much the Central Bank is going to raise the federal funds rate in September, by 50 or 75 bps, but the words that the work has not been done yet deserve attention. Stock markets and gold did not believe the Fed and paid the price. Only the Treasury market turned out to be right—the Fed does not throw words into the wind.

The slowdown in consumer prices from 8.5% to 8.3% in August was more modest than the 8% predicted by Bloomberg experts. Core inflation, on the other hand, accelerated faster than their estimates, which was the main driver of the worst peak in XAUSD since mid-August. Then, too, the inflation data knocked out the bulls. History doesn't repeat itself, it rhymes. The slowdown in inflation expectations from the New York Federal Reserve for the coming year from 6.2% to 5.7%, for three years from 3.2% to 2.8% and for five years from 2.3% to 2%, coupled with an increase in nominal rates on US Treasury bonds, lead to an increase in real yields to the maximum levels from 2018.

Dynamics of real yields of US bonds 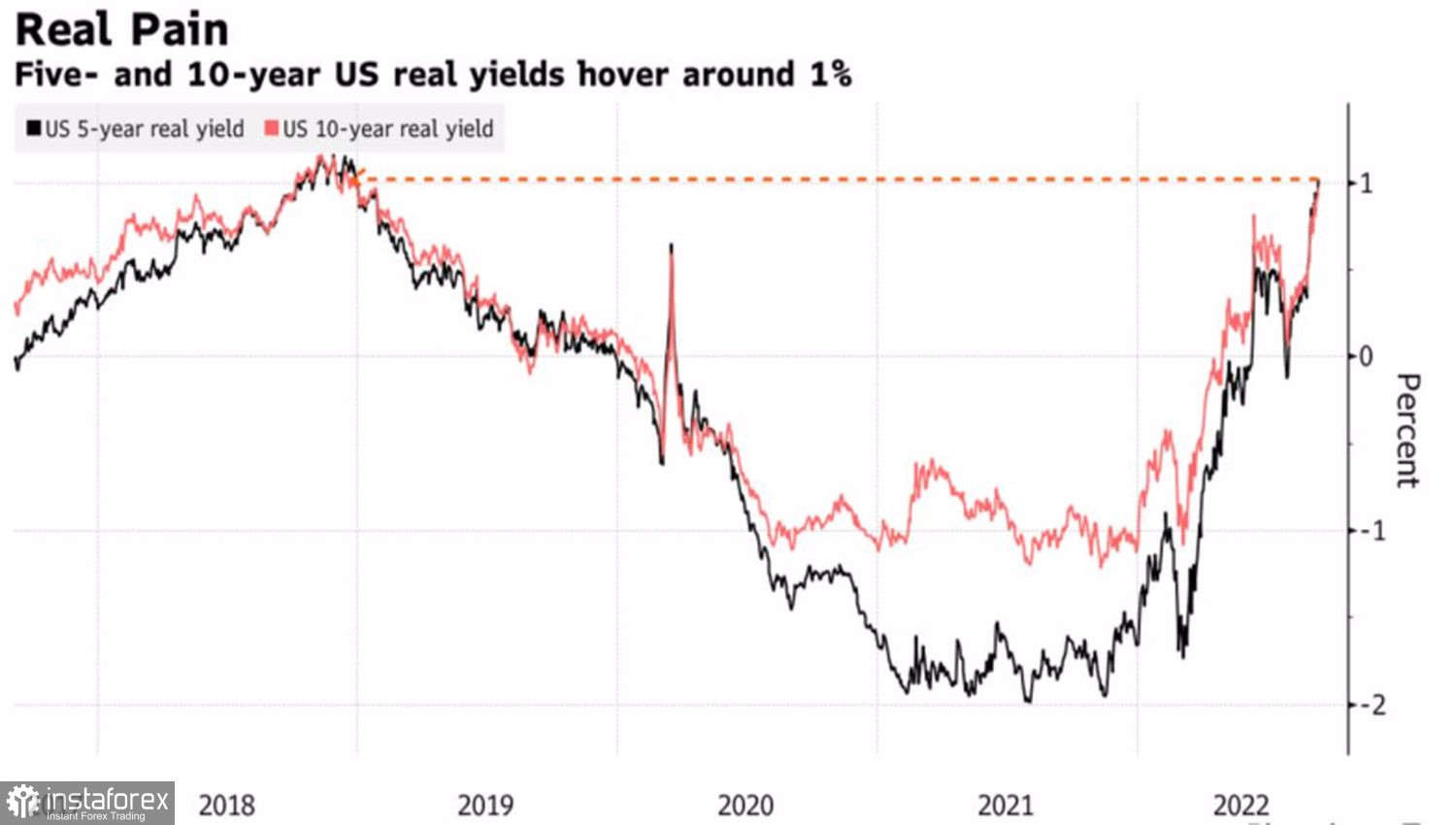 If four years ago, after several increases in the federal funds rate, the Fed found financial conditions too tight and marked a dovish turn, now it will not do this. "Don't let inflation fool you," FOMC member Christopher Waller said ahead of the CPI data release. In order to reset the rate of monetary restriction, several reports are required to convince the underlying indicator to confidently head towards the 2% target. The August statistics show the opposite. High inflation is taking hold in the US economy, requiring new firepower from the Fed.

CME derivatives give a 35% chance of a 100 bps increase in the federal funds rate in September, finally discarding the idea of 50+ bps. The market believes borrowing costs will rise to 4.3% in early 2023. The 4.5% level, which previously seemed unrealistic, is now widely discussed among investors. Previous FOMC forecasts included 3.8% at the end of 2022, but it is likely to rise in September, which will be good news for the US dollar and bad news for gold. 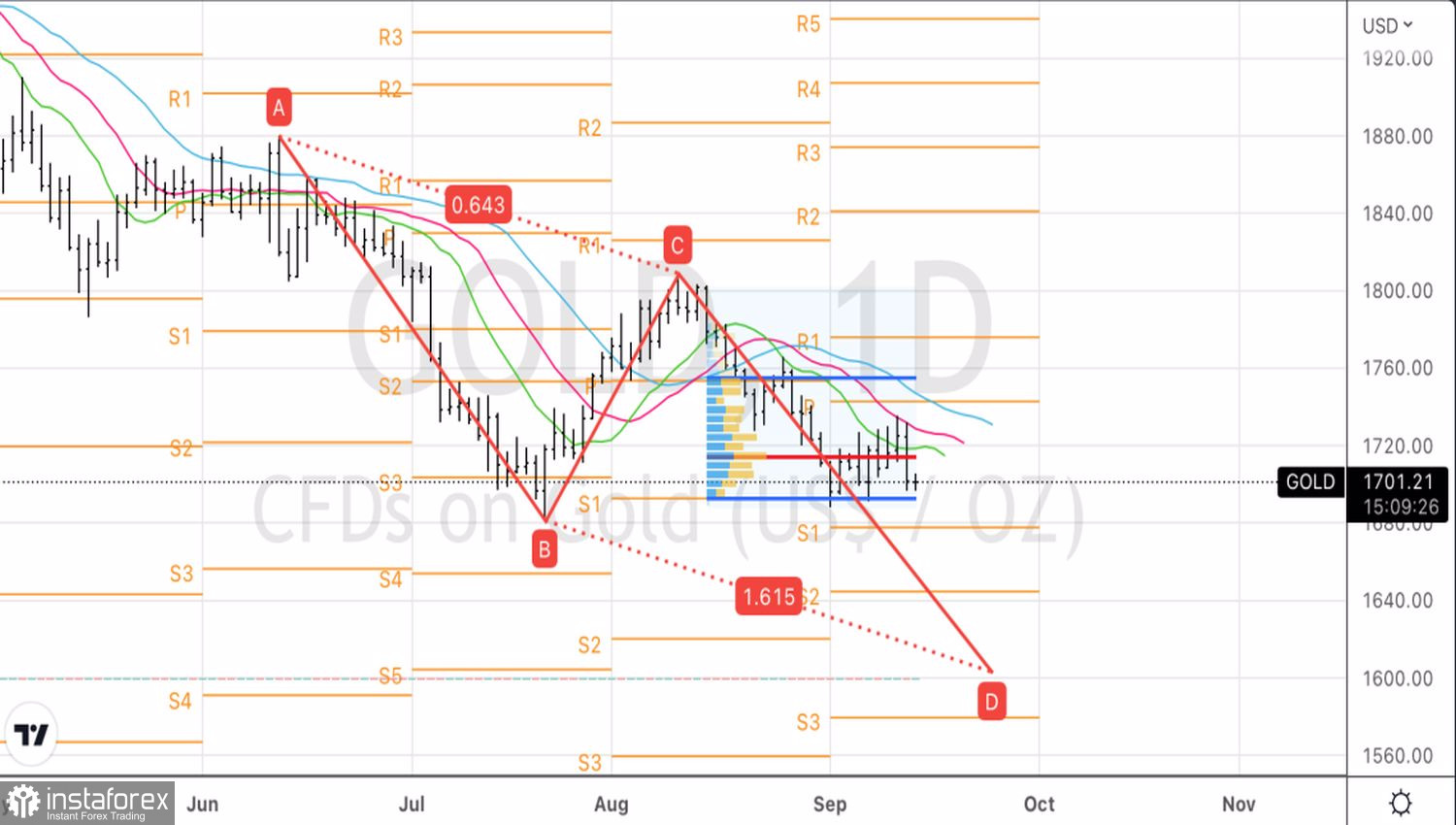 The Fed's aggressive monetary tightening, leapfrogging nominal and real Treasury yields, and the USD index near 20-year highs are the worst environment imaginable for XAUUSD. The inability of the precious metal to cling to $1,700 an ounce will be evidence of the weakness of the bulls and will open the way for it in the direction of $1,600.

Technically, on the daily chart, quotes for the third time in a row over the past couple of weeks have approached the lower limit of the fair value range of $1,692–1,754 per ounce. A break of support at $1,692 will increase the risks of implementing the target by 161.8% according to the AB=CD pattern and will become the basis for building up previously formed shorts.

Relevance up to 09:00 2022-09-19 UTC+2 Company does not offer investment advice and the analysis performed does not guarantee results. The market analysis posted here is meant to increase your awareness, but not to give instructions to make a trade.