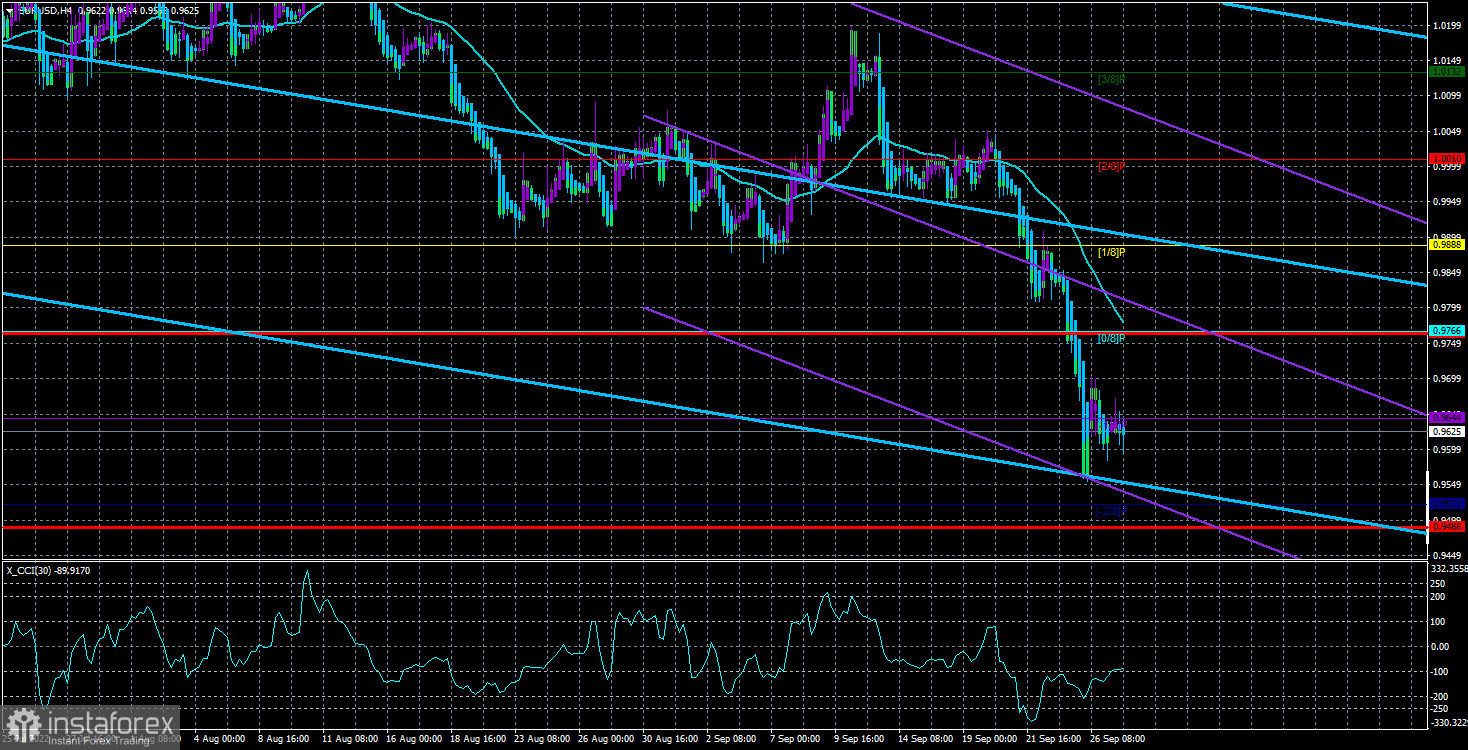 The EUR/USD currency pair traded more calmly on Tuesday than on Monday. Volatility has fallen, so we can talk about the passage of the state of shock that was present on the market on Monday. In principle, the technical picture for the euro currency has not changed at all and has not changed for a very long time. On the 4-hour TF, the pair still shows some meager corrections from time to time, but if we switch to the 24-hour TF, we see a non-stop downward movement. It is very difficult to predict how long this movement will continue since it will largely depend on the geopolitical conflict in Ukraine, development, and various related factors. So far, the market, we can say, is still in a state of panic after Vladimir Putin announced the mobilization in Russia. A huge number of experts of various stripes immediately began to predict what all this would be. Not even for the Russian economy or the development of the conflict in Ukraine itself. What will this mean for the global economy?

First, many have started talking about nuclear war again. It is not surprising since world leaders have begun to pamper us directly with regular statements that they are ready to press the "red button" if necessary. How should the markets feel if everything can end at any moment? Second, mobilization means that in the near future, there will be no peace talks, no freezing of the conflict, nor its transition into a sluggish confrontation, which the markets would certainly like. Third, the issue of referendums and the speech of the President of the Russian Federation on September 30, at which, most likely, the phrase about the annexation of all occupied territories to Russia will be heard. Kyiv and the West have already stated that Moscow can annex whatever it deems necessary. Still, from the point of view of international law, these lands remain Ukrainian, which means that the Armed Forces of Ukraine have every right to go on the offensive. At the same time, Moscow says that any attack on Russian lands gives grounds to use nuclear weapons to protect them. Thus, already in October, the geopolitical situation may seriously escalate. Of course, all this news is shocking for risky currencies, and we believe that the euro and the pound can safely continue their decline.

Christine Lagarde's speech is nothing new.

On Monday and Tuesday, two consecutive performances by Christine Lagarde took place at once. We have already said earlier that it simply does not make sense to expect any new statements from the head of the ECB now. At the September meeting, Lagarde made it clear that the regulator would continue to raise the rate at a high rate until the end of the year. It is from this phrase that we should start. This week, she said that the rate would rise in any case, even despite the decline in economic and business activity. Of course, such measures will be taken to suppress high inflation as quickly as possible. Nothing new.

Lagarde also noted that the support for European households and businesses may have been too voluminous (probably referring to the QE program during the pandemic), so the return of inflation to 2% may take longer than expected. Thus, we can be sure that the rate will continue to rise, which would undoubtedly support the European currency if we did not clearly understand what is happening worldwide and in the markets. The ECB rate will remain below the Fed rate for a long time. This is the first factor in the further fall of the euro against the dollar. The geopolitical conflict, new sanctions against the Russian Federation, which work both ways, high oil and gas prices, and potential refusals of the European Union to purchase oil and gas in Russia will continue to put pressure on the euro, not on the dollar. The states are far away, at least self-sufficient in energy, and the European conflict does not threaten them in any way. Of course, in the event of a nuclear war, everyone will get it, but in this case, we will no longer sit and analyze the foreign exchange market. And while we are still doing this, we would say that the probability of the pair continuing to fall is very high. 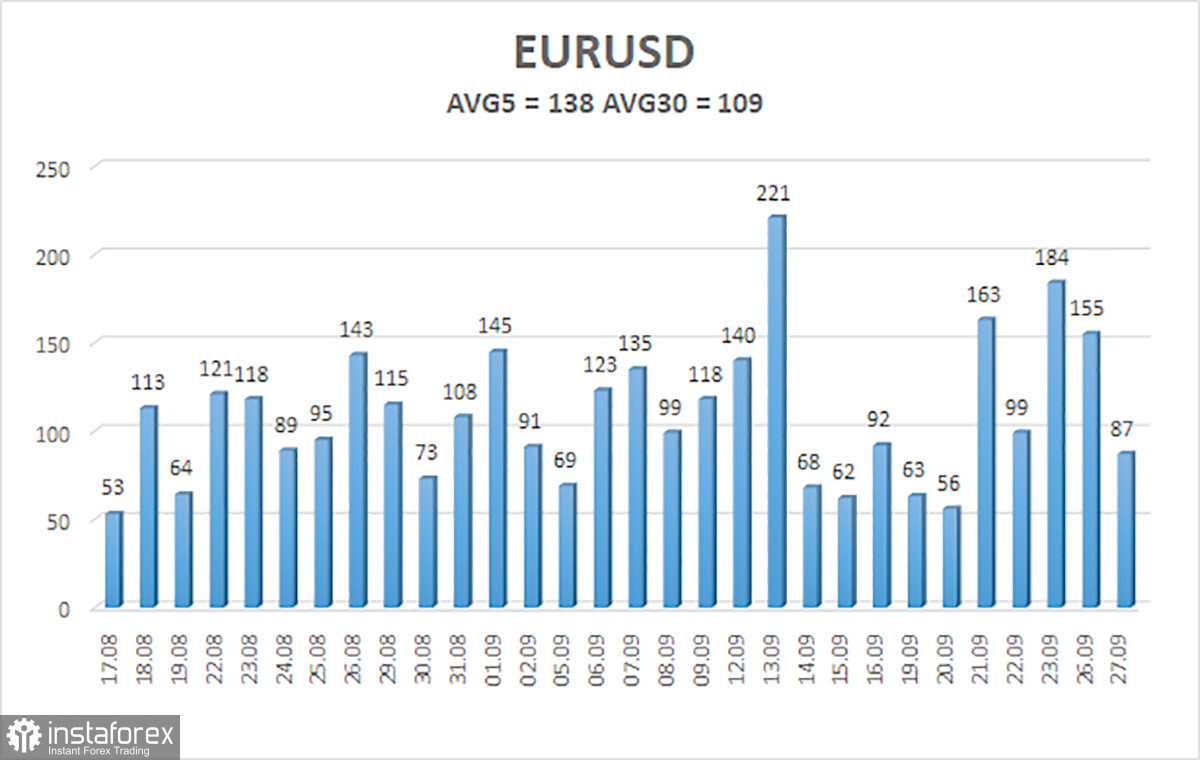 The average volatility of the euro/dollar currency pair over the last five trading days as of September 28 is 138 points and is characterized as "high." Thus, on Wednesday, we expect the pair to move between 0.9488 and 0.9764 levels. The upward reversal of the Heiken Ashi indicator signals a round of upward correction.

The EUR/USD pair maintains a downward trend. Thus, it would be best if you stayed in short positions with targets of 0.9521 and 0.9488 until the Heiken Ashi indicator turns up. Purchases will become relevant no earlier than fixing the price above the moving average with a target of 0.9888.

Explanations of the illustrations:

Linear regression channels help determine the current trend. The trend is strong if both are directed in the same direction.

The moving average line (settings 20.0, smoothed) determines the short-term trend and the direction to trade now.

Murray levels are target levels for movements and corrections.

Based on current volatility indicators, volatility levels (red lines) are the likely price channel in which the pair will spend the next day.

The CCI indicator – its entry into the oversold area (below -250) or into the overbought area (above +250) means that a trend reversal in the opposite direction is approaching.

Relevance up to 02:00 2022-09-29 UTC+2 Company does not offer investment advice and the analysis performed does not guarantee results. The market analysis posted here is meant to increase your awareness, but not to give instructions to make a trade.