For a long time, the Bank of Japan has been at war with financial markets, but in January decided to conclude a truce with them. Keeping the overnight rate at -0.1% and the range of the targeted yield of 10-year bonds at +/-0.5%, the BoJ offered banks a new system of lending not at a fixed, but at a floating rate secured by securities. The volume of bids at the first auction amounted to £3.13 trillion, three times the amount offered. Commercial institutions will invest the money received, including in bonds, which will stabilize the situation both in the Japanese debt market and in the USDJPY pair.

Everyone needs rest. After sharp movements that first led the yen to fall to a 30-year bottom against the U.S. dollar, and then to its strengthening by 17%, the Japanese currency requires rest. A truce is the best way to ensure it, but it was not without a change in the external background here, either. Rising U.S. Treasury bond yields have allowed the USDJPY bulls to raise their heads. The prevailing market optimism about China and Europe's resilience in the face of the energy crisis suggests that the United States will be able to avoid a recession. This reduces the demand for such a reliable asset as American debt obligations and contributes to the growth of interest rates on them.

It's quite possible that institutional investors, who took their net positions on the yen into positive territory for the first time since June 2021, will have to moderate their ardor. At least in the short term.

Dynamics of USDJPY and speculative positions on the yen 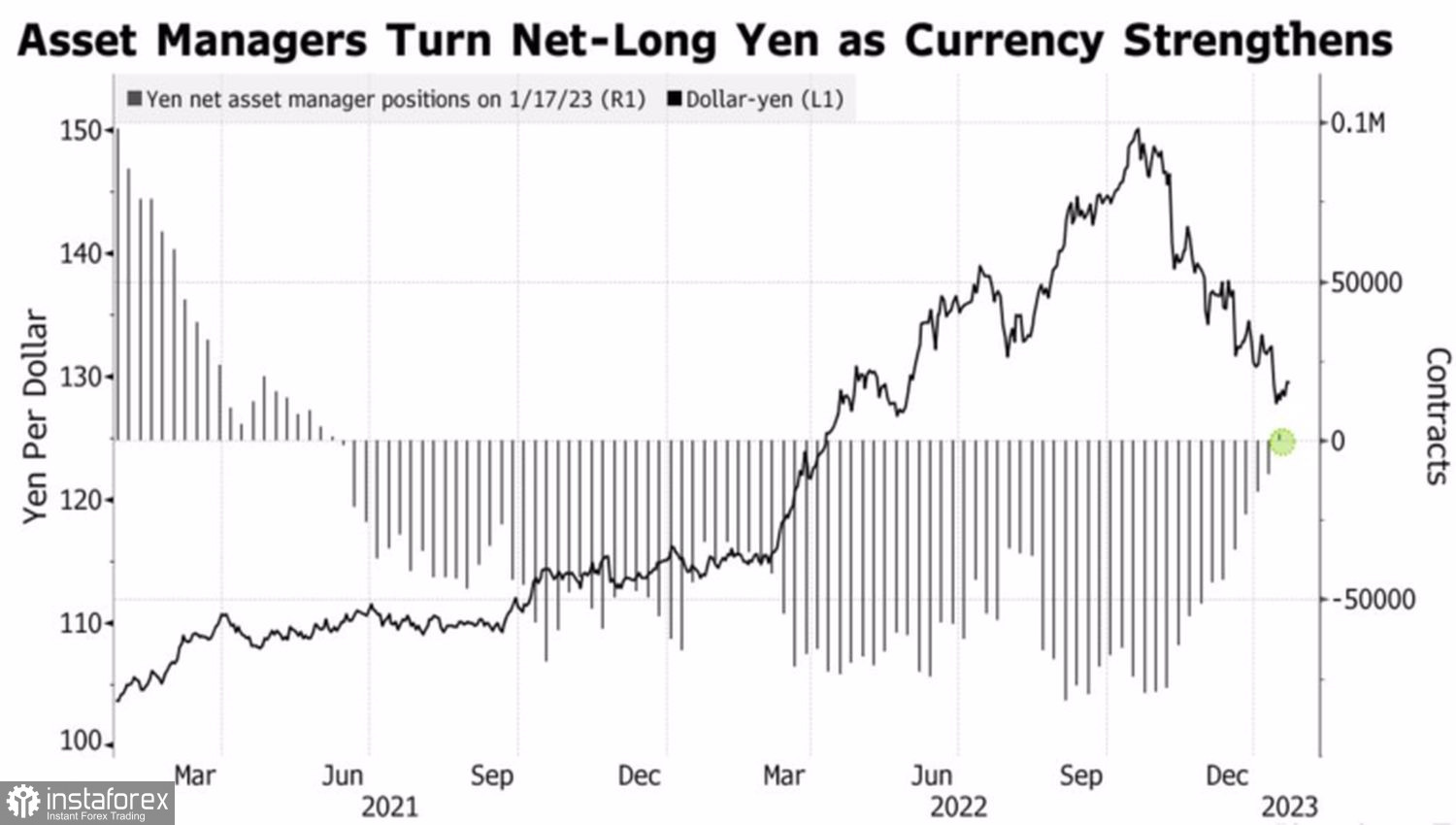 As history shows, inflation can sharply slow down to 2% only in the event of a downturn in the U.S. economy. This was the case in the 1970s, when the Fed's aggressive monetary tightening under Paul Volcker pushed the U.S. into recession. This was the case during the global economic crisis of 2008. Now the situation looks different. The U.S. labor market remains strong as a bull, and the improvement in the economies of China and the eurozone raises global risk appetite and weakens financial conditions.

Risks of a rebound in inflation are increasing, and the odds of a U.S. GDP contraction are shrinking. Not surprisingly, Treasury yields are rising, contributing to USDJPY pair consolidation. 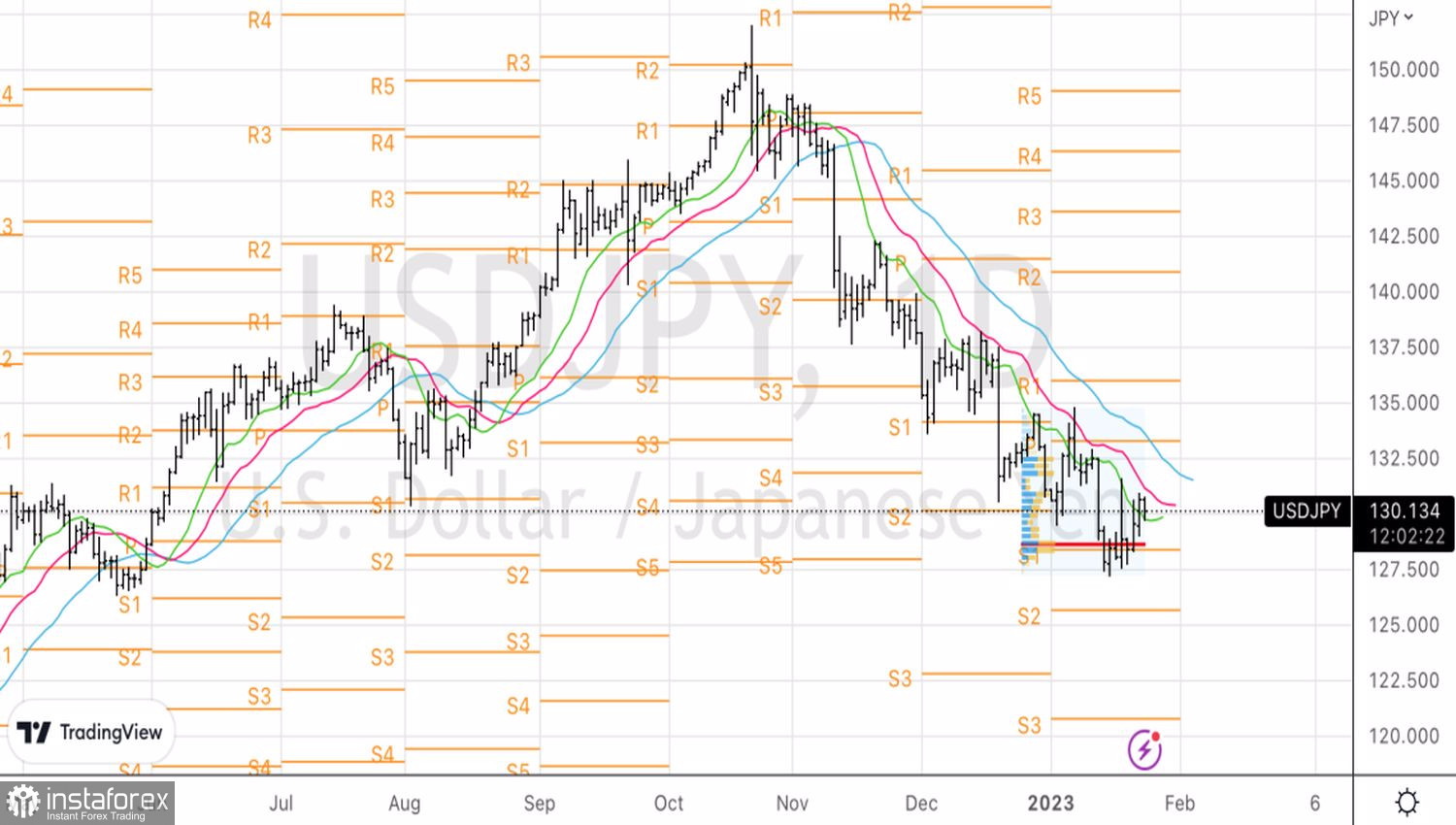 Undoubtedly, the downward trend remains in force as, sooner or later, the Bank of Japan will have to give up control of the yield curve and raise rates. All the more so given the acceleration in consumer prices in Japan to 4%, the highest mark in 41 years, and accelerating wages. Nevertheless, any asset needs a break on a long hike, so USDJPY consolidation is just what the doctor ordered.

Technically, there is a steady downward trend on the daily chart of the pair, but it is too early to speak about its recovery without quotes falling below the fair value of 128.5. The rebound from the 128–128.5 convergence area can be used for buying. Unsuccessful EMA tests near 131.8 and 133.3 can be used to sell the USDJPY.

Relevance up to 11:00 2023-01-29 UTC+1 Company does not offer investment advice and the analysis performed does not guarantee results. The market analysis posted here is meant to increase your awareness, but not to give instructions to make a trade.