Inflation on the mind of NZ dollar | Oanda

The New Zealand dollar has posted strong gains on Wednesday. In the European session, NZD/USD is trading at 0.6345, up 0.86% on the day.

NZD/USD has been on a nasty slide, with only one winning session since April 20th. The US dollar has flexed its muscles lately, particularly against risk currencies like the New Zealand dollar. This is a result of rising risk aversion as well as the Fed tightening its monetary policy.

Investors have plenty to worry about on the global scene, with a slowdown in China and the ongoing Ukraine war among the most pressing problems. China has stubbornly stuck to its zero-Covid policy and put massive numbers of residents under lockdown. This has caused a downturn in the Chinese economy and has also spilt over and is causing significant disruptions to global supply chains. China is New Zealand’s largest export market by far, and the deterioration in China’s growth is taking a toll on New Zealand’s economy.

New Zealand, US inflation data next

Inflation has been spiralling in New Zealand. CPI hit 6.9% in Q1, the highest level since 1990. The RBNZ has responded with a series of rate hikes, and the central bank is clearly concerned about inflation expectations becoming embedded. Inflation Expectations have accelerated over seven straight quarters and hit 3.27% in Q1, up from 2.96% in the Q4 of 2020. We’ll get a look at the Q2 data on Thursday – if the upward trend continues, there will be additional pressure on the RBNZ to aggressively raise interest rates.

The US releases April inflation numbers later today. Headline CPI is expected to drop from 8.50% to 8.1%, and Core CPI is forecast to fall from 6.50% to 6.0%. If the estimates prove accurate, I expect to see headlines proclaiming that inflation has peaked. This would seem to be a premature conclusion based on just one reading, but it would increase risk appetite and the US dollar would likely weaken as a result. On the other hand, stronger than expected numbers will likely boost the greenback, on concerns that the Fed could respond with faster tightening. 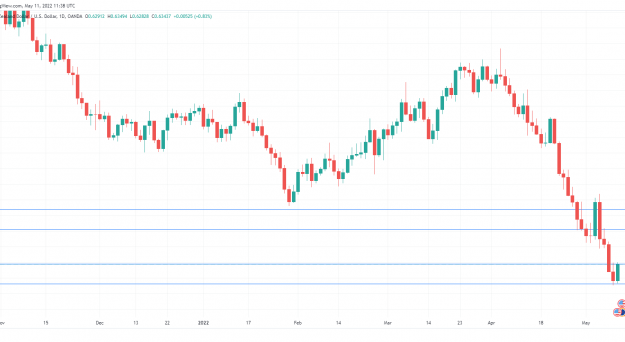