How Is Euro Performing Against US Dollar (EUR/USD)? (EUR) Euro under pressure, falls below 1.04 | Oanda

The euro has stabilized on Friday, after a dreadful Thursday in which EUR/USD fell 1.26%.

The euro continues to struggle and is trading at lows last seen in January 2017. The Ukraine war has taken a bite out of the eurozone economy and sent the euro tumbling. The latest development weighing on the euro was Russia’s announcement of sanctions on some European gas importers, at a time when the EU is trying to garner support for a ban on Russian oil. Germany has said that it could manage without Russian oil, but the main stumbling block to the ban appears to be Hungary, which is very dependent on Russian energy supplies. The euro has broken through major support lines at 1.08 and 1.05, and if it breaches the 1.03 line, we could see move towards parity with the dollar.

The wobbly euro hasn’t received any support from the ECB, which has been slow to shed its dovish policy. After years of monetary easing, ECB members are becoming more vocal about the need for tighter policy, and ECB President Christine Lagarde said earlier this week that QE would end in the third quarter, and a rate hike would follow “some time” after that. We could see a rate increase as early as July, although it’s unclear if the ECB will launch a rate cycle with a hike of 25 or 50 basis points.

The US dollar has shined against the majors, buoyed by an aggressive Federal Reserve. The April US inflation report indicated that expectations of an inflation peak were premature, as CPI fell only slightly, from 8.5% to 8.3%. Fed Chair Powell has signalled that the Fed will deliver 0.50% rate increases in June and July, as the Fed is focused on lowering inflation, which has hit a 40-year high. There has been some talk of a 0.75% hike, but it is far more likely that the Fed will stick with 0.50% moves, hoping that they can do the trick and wrestle down inflation. 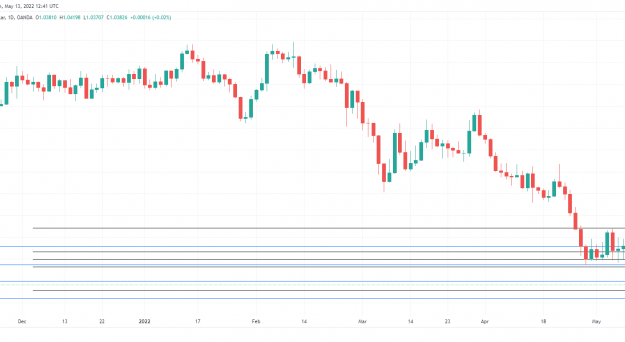