GBP/USD Pair: What Can Traders Expect In Short And Long Positions?

Several market entry signals were formed yesterday. Let's take a look at the 5-minute chart and see what happened. I paid attention to the 1.1509 level in my morning forecast and advised making decisions on entering the market from it. As a result of the pair's growth at the beginning of the European session, a false breakout was formed at the level of 1.1509, which led to a good signal to sell the pound further along the trend. All this resulted in a decline of more than 100 points. The bulls regained the initiative in the afternoon and managed to climb the resistance at 1.1465. A reverse test of this level from the top down provided an excellent buy signal, which led to another 55-point rally for the pound. Selling at 1.1520 brought only about 20 points of profit. 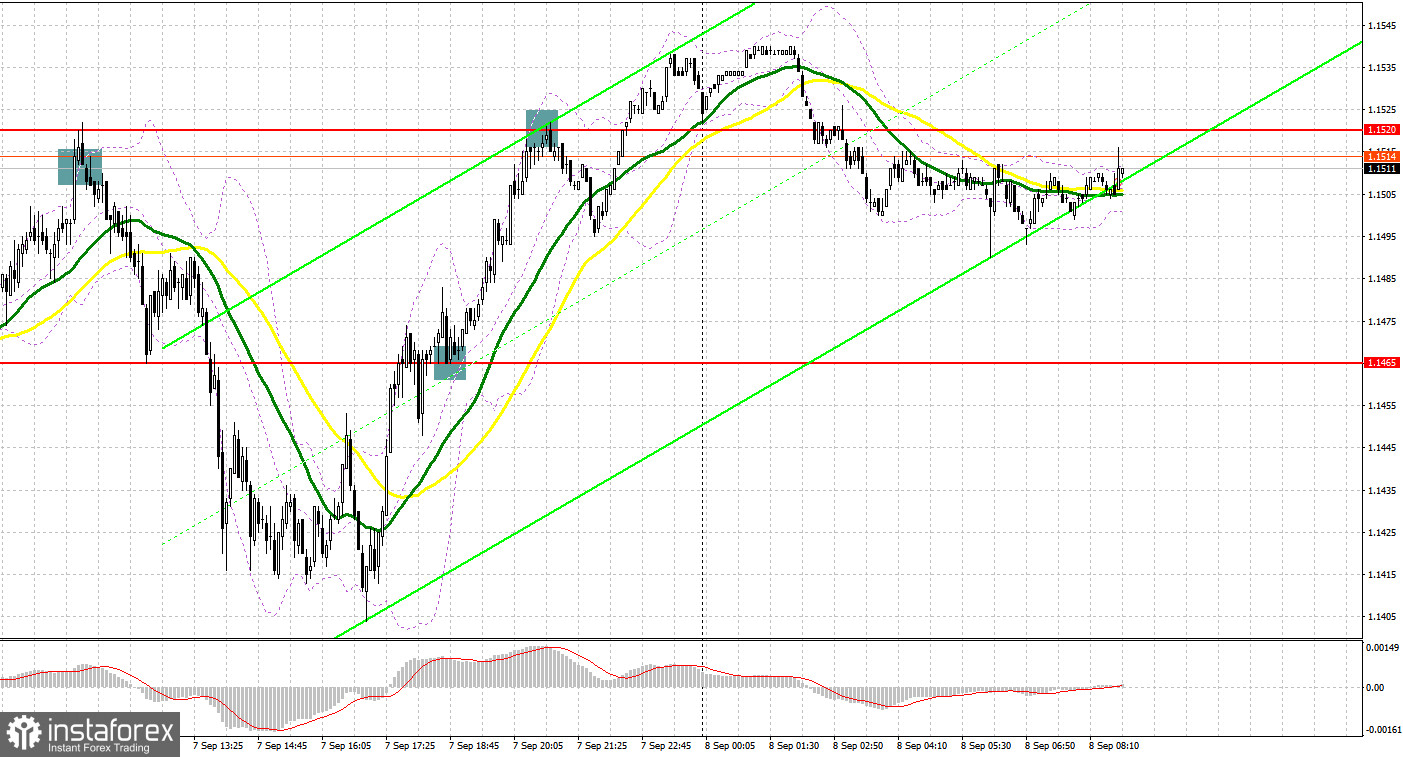 Today there is nothing interesting from fundamental statistics, therefore, for sure, traders will focus their attention on data on the eurozone and will monitor the reaction and attitude of investors towards risky assets after the increase in interest rates by the European Central Bank, which will partially affect the British pound. A strong rise in the euro may lead to a breakthrough of the nearest resistance at 1.1538 in the GBP/USD pair and to the continuation of an upward correction. In case GBP/USD falls in the first half of the day, forming a false breakout in the area of 1.1471, slightly above which the moving averages pass, will provide the first signal to open long positions in order to recover to the Asian high of 1.1538. A breakthrough and a downward test of this range may pull stop orders from speculative bears, which creates a buy signal with growth to a more distant level of 1.1607. The farthest target will be the area of 1.1685, where I recommend taking profits.

In case the GBP/USD falls further and there are no bulls at 1.1471, the pair will be under pressure again. In this case, I advise you to postpone long positions until the next support at 1.1406 - this year's low, but you can act there only on a false breakout. I recommend opening long positions on GBP/USD immediately for a rebound from 1.1358, or even lower - around 1.1313, counting on correcting 30-35 points within the day.

Yesterday, the bears reached the lows of 2020, from where, quite expectedly, there should have been a rebound to the upside, which I have repeatedly paid attention to in my reviews. Today, much depends on the level of 1.1538. Therefore, I advise you to focus on it in the morning. The optimal scenario for opening short positions on GBP/USD would be forming a false breakout at 1.1538, a breakthrough to which may occur at the beginning of the European session. This will make it possible to achieve a sell signal with the goal of returning to the 1.1471 area - an intermediate support level formed yesterday afternoon. Only a breakthrough and test of this range would provide a new entry point for short positions with a fall to this year's low at 1.1406. A more distant target will be the area of 1.1358, where I recommend taking profits.

In case GBP/USD grows and the bears are not active at 1.1538, there will be chances for a continuation of the upward correction, and bulls will have the opportunity to return to the 16th figure. Only a false breakout there will provide an entry point into short positions with the goal of a new decline from the pair. If traders are not active there, I advise you to sell GBP/USD immediately for a rebound from 1.1685, counting on the pair's rebound down by 30-35 points within the day. 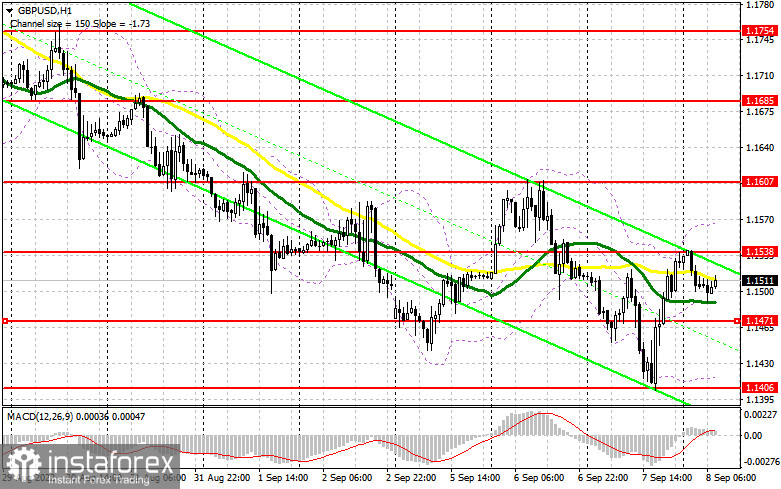 An increase in short positions was logged in the Commitment of Traders (COT) report for August 30, while long ones decreased. This once again confirms the fact that the British pound is in a major downward peak. Serious pressure on the pair will continue in the future, as the British economy is getting worse and worse, and GDP is shrinking quite quickly. The choice of a new prime minister of Great Britain will only provide temporary support to the pound, since, in fact, it does not change anything. In turn, the US economy continues to show strength, and recent data on the labor market once again convinced investors that the US central bank, led by Federal Reserve Chairman Jerome Powell, will continue to raise interest rates at an aggressive pace, which will only increase pressure on the British pound, which is experiencing quite a lot of problems lately. Expected high inflation and a looming cost-of-living crisis in the UK does not give traders room to take long positions, as a fairly large range of weak fundamentals is expected ahead, likely to push the pound even further below the levels at which it is currently trading. The latest COT report indicated that long non-commercial positions decreased by 306 to 58,477, while short non-commercial positions rose by 898 to 86,647, which led to a slight increase in the negative value of the non-commercial net position to -29,170 vs. -27,966. The weekly closing price collapsed from 1.1661 against 1.1822.

Trading is conducted in the area of 30 and 50-day moving averages, which indicates market uncertainty with the further direction.

Relevance up to 09:00 2022-09-09 UTC+2 Company does not offer investment advice and the analysis performed does not guarantee results. The market analysis posted here is meant to increase your awareness, but not to give instructions to make a trade.