The pound continues to lose ground and is trading at its lowest level since May 2020. GBP/USD fell below the 1.22 level earlier and hasn’t had a daily winning session since May 4th.

The BoE has raised rates to 1.0%, a 13-year high, but it’s clear that the BoE has fallen behind the inflation curve and is playing catch-up

The negative growth reading was a result of the crushing inflation that has gripped the UK. CPI hit 7% in March and the markets are braced for a reading of around 9% from week’s April CPI release. The cost of living crisis has dampened consumer spending, a key reason for the negative reading for March GDP. The BoE has raised rates to 1.0%, a 13-year high, but it’s clear that the BoE has fallen behind the inflation curve and is playing catch-up. At last week’s policy meeting, the central bank warned that inflation could top 10% and there was the danger of a recession. The pound tumbled over 2% in response, even though the BoE increased rates by 0.25%.

The grim economic outlook does not bode well for the pound, which has tumbled 7.1% since May 1st

The BoE finds itself between a rock and a hard place. It needs to raise rates in order to curb soaring inflation, but weak growth means that the higher rates could tip the economy into recession. The grim economic outlook does not bode well for the pound, which has tumbled 7.1% since May 1st.

US inflation eases, a bit

US inflation weakened in April, but not as much as the markets had expected. CPI dropped from 8.5% to 8.3%, higher than the consensus of 8.1%. This slowdown was not enough for the markets to price in “peak-US inflation”, and the dollar managed to hold its own against the major currencies. There had been talk of an “inflation peak”, but the inflation data indicates that even if inflation is falling, the pace could be much slower than the markets would like. 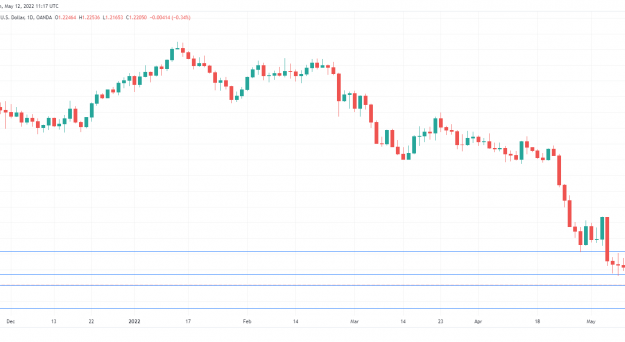