Relevance up to 10:00 2022-08-18 UTC+2 Company does not offer investment advice and the analysis performed does not guarantee results. The market analysis posted here is meant to increase your awareness, but not to give instructions to make a trade.

Alphabet, the owner of Google, has invested as much as $ 1.56 billion in projects from the blockchain market. This happened between September 2021 and June 2022, according to a report from Blockdata.

In recent years, Alphabet, the parent company of Google, has entered the blockchain market. It is worth adding, however, that the company initially adopted a cautious approach to this sector. Ultimately, however, she partnered with Dapper Labs, a studio developing products in the Web 3.0 field.

"We look at the blockchain market with interest; it is a very interesting and powerful technology with wide applications"

How do other giants fare against this background? In the same period, i.e. September 2021 - June 202, BlackRock invested $ 1.17 billion in blockchain initiatives. Morgan Stanley, in turn, spent $ 1.1 billion on similar projects. Samsung has allocated $ 979 million for projects of this nature, and Goldman Sachs - $ 698 million.

In general, companies are entering the blockchain market, despite the fact that it is still unknown if and when this technology will be widely available in a few years, and its adoption will continue. However, the current forecasts of experts indicate that the development of the block network in the coming years will continue. The current actions of giants like Alphabet mean that these corporations will have a competitive advantage as the said adoption continues to develop.

The BTC/USD pair had been capped several times around the level of $25k as the bulls clearly do not have enough momentum to make the sustained breakout possible. The intraday technical support is seen at $23,596 and might be hit any time now as the last bounce from the local lows was very shallow. The momentum is now weak and negative on the H4 time frame chart, so a deeper correction towards the level of $22,679 is possible as well. Please notice, the Bitcoin market keeps moving inside the ascending channel, so the bullish impulsive wave scenario to the upside is now invalidated. If there is no sustained breakout from the channel, the bears might accelerate the sell-off and test the swing low seen at the level of $17,600 again. 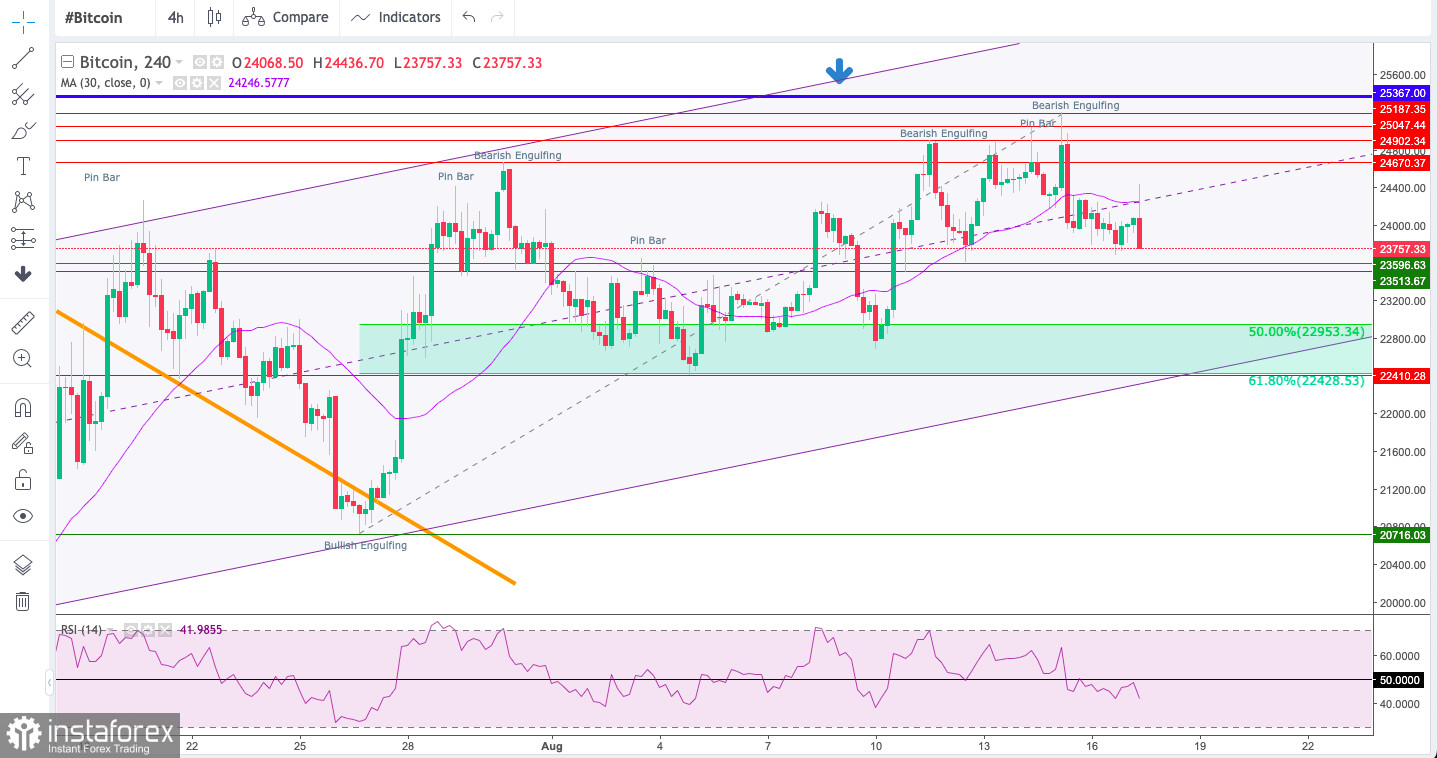 The down trend on the H4, Daily and Weekly time frames continues without any indication of a trend termination or reversal. So far every bounce and attempt to rally is being used to sell Bitcoin for a better price by the market participants, so the bearish pressure is still high. The key long term technical support at the psychological level of $20,000 had been violated, the new swing low was made at $17,600 and if this level is violated, then the next long-term target for bulls is seen at $13,712. On the other hand, the gamechanging level for bulls is located at $25,367 and it must be clearly violated for a valid breakout.