Investors are keeping both eyes on Canada’s April inflation report, which will be released later today. On a monthly basis, the markets are expecting a significant drop – headline CPI is expected at 0.5% (1.4% prior) and core CPI is projected at 0.4% (1.0% prior). If the readings are within expectations, we can expect some headlines trumpeting that inflation has peaked. I would argue that it would be premature to declare that inflation is easing based on a single reading.

Still, the CPI release could be a market-mover. If inflation is weak, the markets may expect the BoC to be less aggressive in its rate hiking stance and that could send the Canadian dollar lower. Conversely, a stronger than expected CPI would likely send the Canadian currency higher. The BoC raised rates by 0.50% in April, and there is strong pressure to deliver another 0.50% hike at the June 1st meeting, especially if inflation is higher than expected.

The US dollar lost ground overnight, even though US Treasury yields moved higher and Fed Chair Powell said rates could rise above the terminal rate (around 3.50%) in order to contain inflation. Former Fed Chair Ben Bernanke weighed in on Fed policy, saying that the central bank waited too long to respond to inflation. Bernanke warned that he expected to see stagflation in the next year or two.

Despite the talk of recession and stagflation, the US posted strong numbers on Tuesday, led by retail sales. The headline reading came in at 0.9% and core retail sales at 1.0%, as both beat the estimates. Consumers are in a spending mood, despite a weakening in consumer confidence. If inflation doesn’t show signs of easing in the next few months, consumers might reduce spending, which could dampen economic growth. 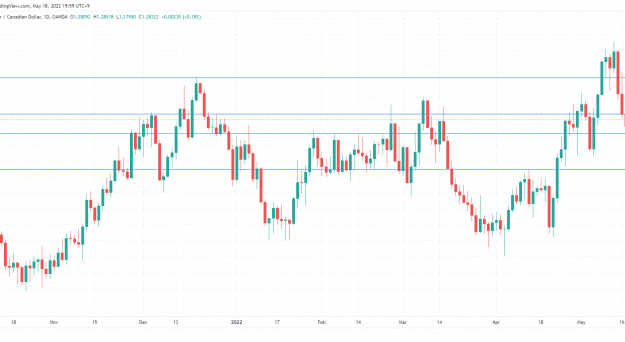