Because Of Interest Rate Decisions, This Week Major Forex Pairs As EUR/USD, US Dollar To Japanese Yen And GBP To USD May Be Rocking!

This could be a very exciting week in the financial markets, as investors will first await and then react to the central banks' interest rate decisions. The US Federal Reserve's decision may come to the forefront.

On Monday morning, the U.S. dollar appears to be continuing last week's strengthening, perhaps due to investors' bias toward safer assets and because of a likely hawkish 75 basis point rate hike by the Federal Reserve. The Fed will usher in a series of central bank decisions in the coming days, according to scheduled publications on the macroeconomic calendar.

Dollar back on upward wave

The U.S. Dollar Index rose 0.23 percent today to 109.92 points as of 07:52 GMT+3 on the Conotoxia MT5 platform, after gaining 0.8 percent at the close of last week. The EUR/USD pair's exchange rate fell 0.26 percent as of the time described, and was again below parity ($0.9984). The dollar may gain in anticipation of a US interest rate hike as early as this Wednesday, September 21, where the FOMC macroeconomic projections will also be released. Here, the market may set its sights on presenting a target range in the current cycle above 4 percent (the end of the cycle was previously estimated to be below 4 percent). 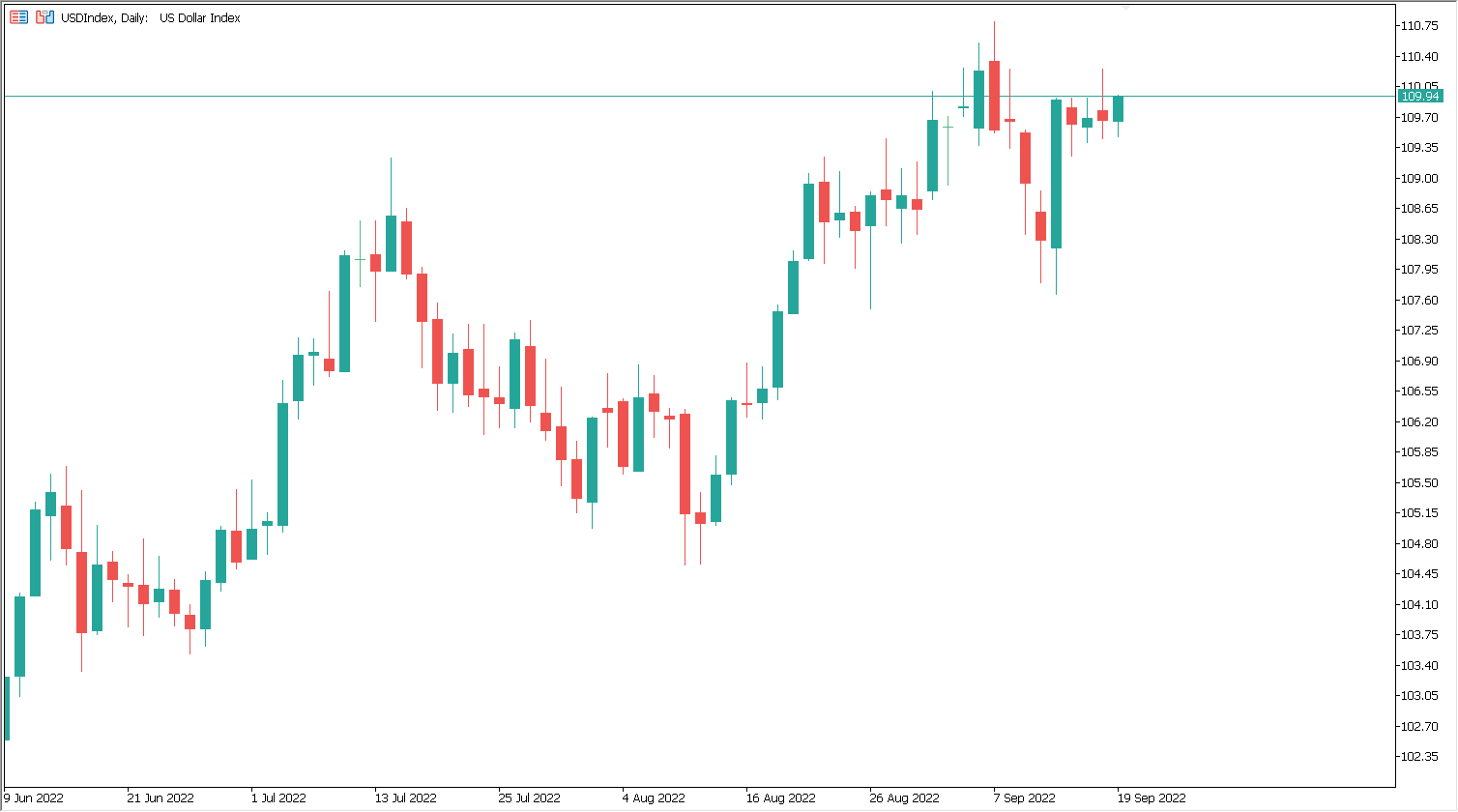 Bank of England and Bank of Japan - what is the situation on GBP and JPY?

In addition to the U.S. Federal Reserve's decision, we will also learn about the decision of the Bank of England and the Bank of Japan. On Thursday, interest rates in the UK may rise by 0.5 percentage points, to 2.25%, this is the market consensus. The GBP/USD pair, after Friday's decline, is below $1.14 this morning at 08:02 GMT+3. Thus, the pound's exchange rate against the US dollar is the lowest since the 1980s. 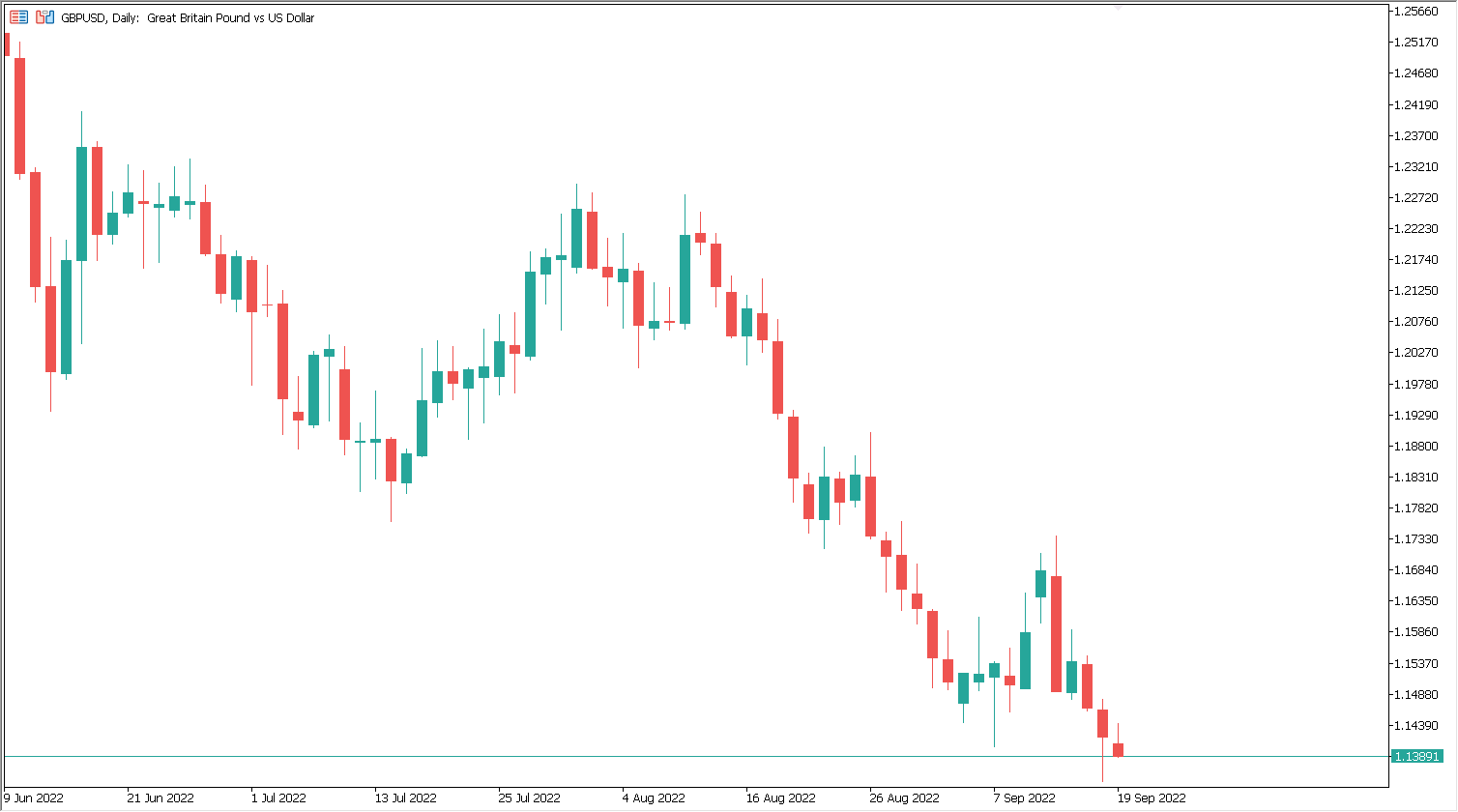 Meanwhile, the Bank of Japan, although inflation remains above the 2% level, it seems  unlikely to decide to tighten monetary policy. As a result, the country may still remain in opposition to other developed economies, where an interest rate hike cycle is underway. This could continue to put pressure on the Japanese yen, which in turn could put pressure on Japanese politicians and policymakers, who may continue to debate possible market intervention. However, it is implied that only a change in the BoJ's approach could affect the yen more.

When is the Fed's decision on rates?

In summary, the Fed's decision will take place at 20:00 GMT+3 on September 21 (Wednesday), the Bank of Japan's on Thursday night, September 22 (the exact time is not scheduled), and the Bank of England's at 13:00 on the same day.

Materials, analysis and opinions contained, referenced or provided herein are intended solely for informational and educational purposes. Personal opinion of the author does not represent and should not be constructed as a statement or an investment advice made by Conotoxia Ltd. All indiscriminate reliance on illustrative or informational materials may lead to losses. Past performance is not a reliable indicator of future results.

Forex has never been just a job for us. It is our passion to create the best trading conditions for each trader. Chose us and benefit from global trusted brand.