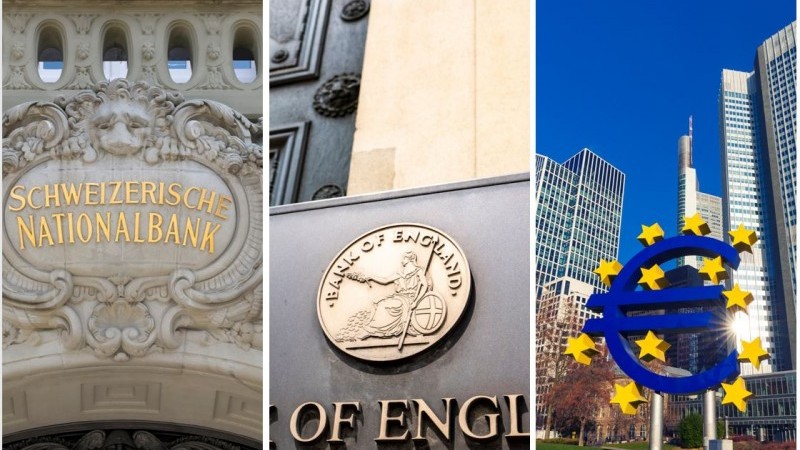 European central banks are gradually adjusting their policy setting to a world of positive interest rates but with still abundant liquidity. The common theme here is that hundreds of billions, or trillions in the ECB’s case, of bank reserves will be remunerated at positive interest rates, at a cost for their central banks, and ultimately their domestic government treasury.

The Swiss National Bank (SNB) was the first one to actually implement a reserve tiering system at its September meeting. In a nutshell, banks’ sight deposits at the SNB up to a certain threshold will earn the SNB policy rate, currently 0.5%, and 0% on balances above that threshold. This, however, is only part of the story. In parallel, the SNB announced it will conduct liquidity-absorbing operations (Open Market Operations or OMOs). With a threshold set at an elevated 28 times banks required reserves, it won’t take much effort for the SNB to absorb enough liquidity so that all that remains is remunerated at the SNB. In effect, the SNB rate should remain the marginal rate in CHF money markets, and tiering should act as an incentive for banks to participate in liquidity-absorbing operations.

The upshot is that the main feature of the new liquidity set-up at the SNB will be to remove liquidity from the system as it tightens policy in order to get inflation under control. There is likely to be only marginal interest rate savings for the central bank on its CHF640bn of sight deposits, if at all, but this doesn’t seem to be the point of the policy change. Rather the SNB's goal seems to be to make sure higher policy rates are transmitted to the economy.

Bank reserves at the BoE will decline with QT, but not fast enough to save much interest cost to the BoE

BoE: saving money where it can

There have been persistent press reports that the UK is looking to reduce the amount of interest it pays to banks. This is a more pressing issue in the UK because bank reserves now approach £945bn and the swap curve is implying that the Bank Rate could climb to 5% next year. This is something of a worst-case scenario, but this would result in an interest rate bill approaching £50bn per year. In practice, we think that rate hike expectations are exaggerated, and the BoE intends to reduce its bond holdings, and so the amount of reserves, by £80bn per year at least. At a time of large open-ended fiscal support to energy consumers, the Treasury could be forgiven for trying to save on this interest rate bill.

Two options present themselves to the BoE. Designing a reserve tiering system akin to the SNB would allow it to gradually reduce the amount of liquidity in the system. Interest cost saving would probably be underwhelming at first, but it could attempt to gradually increase the amount of liquidity withdrawn from the system, thus also supporting its monetary tightening stance.

Inversely, it could determine a fixed amount of reserves that is remunerated at 0%, with balances above that threshold earning the Bank Rate. If that threshold is set too high, this measure would incentivise banks to get rid of their liquidity and would push money market rates lower, thus contradicting the BoE’s monetary policy stance. Setting the threshold lower would mean a lower interest rate saving from the BoE but also probably less disruption in GBP money markets. We think this is the option that would likely deliver the best near-term compromise for public finances. Its market impact should be limited at first.

The European Central Bank’s motivation could be similar to the BoE's. As policy rates rise, the interest banks earn by placing liquidity at the ECB will gradually rise above the rate they are paying on their targeted longer-term refinancing operations (TLTRO) loans, presenting them with an interest rate gain. If this is the sole problem it is intending to solve, one option would be to retroactively change the TLTRO terms by raising its interest rate. This would be detrimental to the predictability, and so attractiveness of future TLTRO operations, however. With the brunt of TLTRO loans due to expire by the middle of next year, one could also question the need to come up with risky solutions to a problem that will disappear in nine months.

If on the other hand, the goal is to reduce its interest bill over the longer term, it could borrow one of the two designs described above. A set-up similar to the SNB’s, where a fixed amount of reserves earns the policy rate and the amount in excess earns 0%, would imply that it intends to actively withdraw liquidity. This could be achieved if banks rush to repay TLTRO loans, but this is likely to result in at least a temporary drop in money market rates. To prevent this temporary disruption, the ECB could bridge the period until the next quarterly TLTRO repayment opportunity with ad hoc liquidity draining operations, or simply make the tiering apply on the same date as TLTRO repayment.

If this is the option retained by the ECB, the reduction in excess liquidity resulting from early TLTRO repayments, and other liquidity draining operations, would push money market rates higher relative to the ECB deposit rate. Interbank lending rates would be the first area where we expect a reaction as banks move to replace TLTRO funding. In time, we'd also expect greater competition among banks to attract wholesale deposits. Both would push Euribor fixings higher relative to euro short-term rate (Estr) swaps. This should also contribute to pushing Estr fixings above the deposit rate, and closer to the refinancing rate.

A design similar to the one described above for the BoE, where a fixed amount earns 0% and balances above that threshold earn the policy rate, would guarantee some interest rate saving but wouldn’t provide an incentive for banks to repay TLTRO funds if the threshold is set low enough. If the threshold is set high, then the risk is that 0% becomes the marginal interest rate for many banks and that some countries end up being net lenders, and others net borrowers. The result would be a drop in money market rates in some countries, and a rise in others.