AUDUSD: Yes, US Dollar (USD) Is Really Strong And Boosted But What About Its (AUD) Australian Cousin? | InstaForex

Relevance up to 11:00 2022-06-11 UTC+2 Company does not offer investment advice and the analysis performed does not guarantee results. The market analysis posted here is meant to increase your awareness, but not to give instructions to make a trade.

Divergences in the Fed's monetary policy with other central banks and American exceptionalism, when US GDP growth was faster than that of its main competitors and the global economy as a whole, allowed the USD index to soar to 20-year highs. However, an increase in the federal funds rate slows down the gross domestic product in the States, while in some other countries the opposite process is underway. Divergence in economic growth is no longer playing on the side of the US dollar. It has serious opponents.

The decline in employment growth and inflation, disappointing statistics on business activity, and the real estate market are strong evidence of the loss of a pair of US GDP. This is normal in the context of the tightening of the Fed's monetary policy. The question is, will an aggressive rate hike provoke a recession? Australia's economy, by contrast, continues to accelerate. The strongest labor market in the last 48 years, benefits from problems with grain supplies from Ukraine and India, a strong raw materials market in general, and hopes for monetary incentives from China to open the way for further economic growth of the Green Continent.

In the first quarter, it accelerated to 3.3% y/y and to 0.8% q/q, which, against the background of the sliding of the American analog into the red zone, became one of the drivers of the AUDUSD rebound from the levels of the May lows by 5.7%. Rapid GDP growth, inflation at 5.1%, which is above the upper limit of the targeted range of 2-3%, and the lowest unemployment in almost half a century allowed the RBA to begin a cycle of tightening monetary policy.

Dynamics of the main economic indicators of Australia 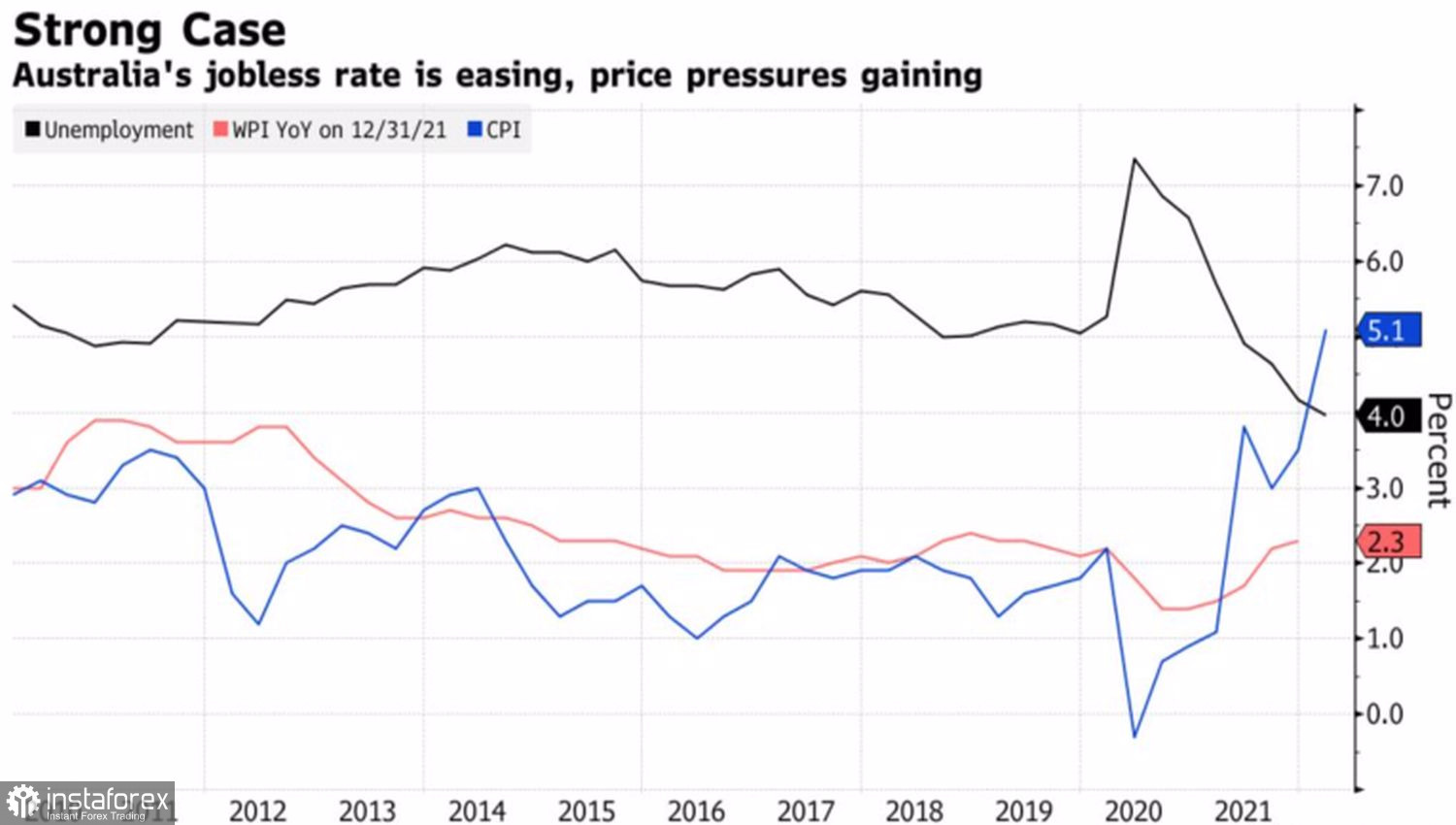 Now the markets are worried about how much the cash rate will grow at the meeting on June 7? 15 out of 29 Bloomberg experts predict that by 25 bps, three - by 50 bps, and the remaining 11 - by 40 bps. Financial markets also adhere to the latter opinion. Proponents of gradual monetary restriction nod to household debt, and an increase in the cost of services will lead to a decrease in consumption. The latter accounts for 60% of GDP. "Hawks" talk about the need to rein in inflation as quickly as possible and cite the example of the Fed and other central banks that use big steps.

In my opinion, when a significant part of the positive from the increase in the federal funds rate is already embedded in the US dollar quotes, while Bloomberg experts' forecasts for the cash rate growth limit of up to 2% fall short of market expectations of 2.8% by December and up to 3.6% a year later, the AUDUSD pair has not yet revealed its potential. UBS predicts its growth to 0.76 by the end of 2022 and to 0.78 by the end of March 2023, and this makes sense. 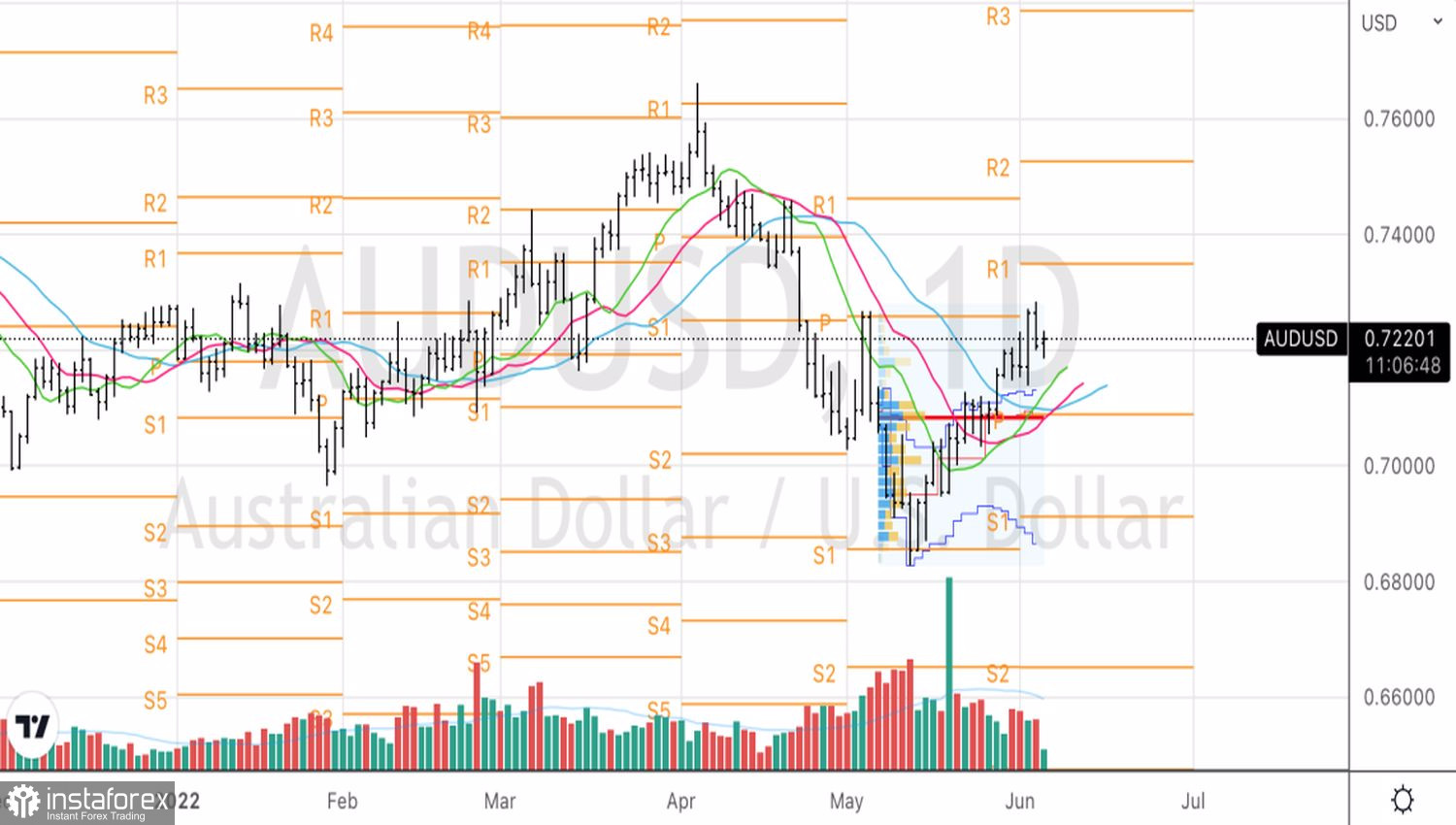 Technically, finding AUDUSD above fair value and moving averages indicates the dominance of "bulls". A breakout of resistance at 0.7255, where an important pivot level is located, or a rebound from supports at 0.714 and 0.71 should be used to form long positions.