What are Canary Network and Songbird Network? Songbird Crypto Token and more explained by ByBit

Cross-chain interoperability remains a challenge for the wider adoption of blockchain technology. By default, blockchains are self-contained environments that have limited points of contact with the outside world. Many projects have been launched in recent years to improve blockchains’ ability to communicate with each other. One of the upcoming projects in this domain is Flare Network (FLR). This new blockchain takes pretesting seriously, with a test chain, Songbird (SGB), at the core of its launch activities.

What Is Canary Network?

As such, a canary network might be considered a more advanced network type than a testnet. In some cases, canary networks continue to operate for years alongside their main chain, and might even develop defined ecosystems of their own.

What Is Songbird Network?

Songbird is the canary network for the Flare blockchain, a smart contract platform designed to enhance cross-chain interoperability that’s compatible with the Ethereum virtual machine (EVM), opening up opportunities for interaction with a large number of modern blockchains.

Originally, Flare was conceptualized to help improve compatibility between the XRP Ledger and other popular public blockchains. The XRP Ledger is the enterprise-oriented blockchain of leading crypto financial network Ripple, whose coin, XRP, is the 7th largest cryptocurrency by market cap.

Top 7 Cryptocurrencies by Market Cap as of November 21, 2022

By connecting the XRP Ledger to other prominent blockchains, Flare can help markedly improve the business world’s overall adoption of blockchain technology.

As of November 2022, Flare is in “observation mode,” with its beta version expected to be launched shortly.

Similar to Polkadot’s (DOT) thorough adoption of pretesting via its own canary network, Kusama (KSM), the developers of Flare are using Songbird as a testing network to implement all the key features of Flare: Flare Time Series Oracle (FTSO), State Connector and F-Assets. This means that Songbird would always be a step ahead of Flare in terms of technological innovations, albeit with the added risk of instability.

FTSO is a network of oracles that feeds external price-pair data into Flare’s blockchain. State Connector is a Flare functionality to securely pass off-chain data on the network. F-Assets are special assets designed to enable smart contract functionality on Flare using cryptocurrencies that don’t normally support such a feature. Examples of these cryptocurrencies would be XRP, as well as popular coins based on the proof of work (PoW) consensus protocol such as Bitcoin (BTC), Dogecoin (DOGE) and Litecoin (LTC).

What Is Songbird Crypto Token (SGB)?

SGB is Songbird’s native crypto coin. One of its key functions is governance. SGB is crucial for testing governance-led functionalities of the Flare ecosystem. Flare governance proposals may originate from two sources — the Flare Foundation (a Netherlands-based nonprofit in charge of the project), and the user community. If a proposal comes from the Foundation, it’s voted on directly on the Flare network.

However, if the user community submits a proposal, it first has to go through the voting process on Songbird, with SGB coin holders making a decision. If the vote is successful, the proposal will move to the next stage, voting and consideration on Flare. Changes proposed by the user community via voting on Songbird concern the actual Flare blockchain, not Songbird directly. If the changes are implemented on Flare, they’ll be duplicated on Songbird for testing purposes.

Besides governance, SGB can also be used within the key apps and services on Songbird — FTSO, State Connector and F-Asset systems — as a testing ground. This way, users who wish to use Flare network can first try out the services without risking their FLR coins while earning SGB coins. For example, oracle data providers in FTSO earn rewards for their activity. SGB holders may also delegate coins to their chosen data providers to improve their voting power, and to earn a share of the rewards paid to them.

In September 2021, SGB started with a supply of 15 billion at an annual inflation of 10%. There are now 16.7 billion coins, 8.7 billion of which are in circulation. The coin has been airdropped to XRP holders via various exchanges at a rate of 0.1511 SGB:1 XRP. 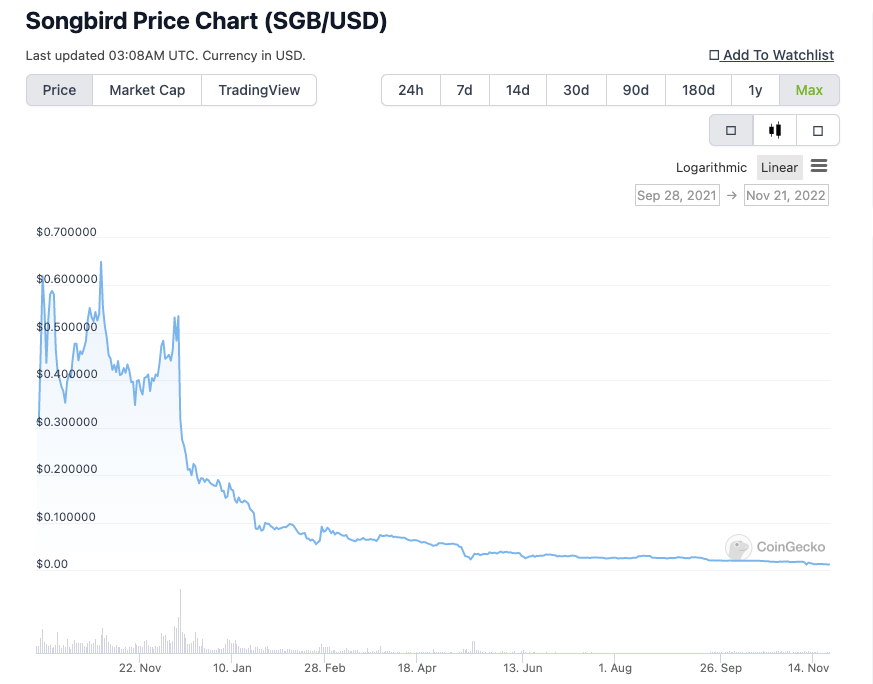 Our view is that SGB does have potential for modest-to-good growth. Its network acts as a testing environment for a project that has great potential to bring enterprise-focused XRP to the wider blockchain ecosystem. Its useful functionality to enable smart contract operations for mineable cryptos — BTC, LTC and DOGE — may also provide further support to SGB.

Songbird’s fate will largely depend on what kind of canary network it develops into over time. It might fade into obscurity when advanced testing is completed, and the Flare ecosystem is in full swing. However, as with Kusama/Polkadot, Songbird might continue to flourish and develop its own unique and rich ecosystem, independent of Flare. If Flare’s project team keeps an eye on the Kusama/Polkadot environment, they might see the benefits of actively supporting Songbird as its own long-term network.