What a week, from crashing lows that started to point towards extensions in current medium-term downtrends to a late-week save that really came out of nowhere and looks to be telling us that price may have hit exhaustion lows?

The week started OK for most of the top 10 and 25 as prices tested higher but failed to get real traction happening. Then this week’s crisis hit. First, we saw Russia pledge support to the two breakaway parts of Ukraine that claimed independence from the Ukrainian government. Russia was quick to recognise and send in peacekeeping troops that many saw as a proxy invasion. Crypto fell on these developments, but worse was yet to come. Wednesday buying was cut short as cyber attacks hit Ukraine and Europe, but Thursday lunchtime AEDT, the unthinkable had happened, Russia had launched a ground and air assault on Ukraine.

As you would expect, coins were savaged, and at one stage, it looked like Armageddon had hit the crypto world. While we saw multiple coins plunge by over 10% in stages of the day, (ETH -12%, AVAX -15%, SHIB -18%), some bucked the sell-off and actually soared off the uncertainty. We suggest anyone interested by this may want to take a look at PAX. On the day of the invasion, PAXUSD jumped by 6%, hitting 2029. In a week, which showed us that while most cryptos remain in the risk basket, PAX could be a safe-haven coin of the group.

Thursday’s drama didn’t end there marketwise either. Late into the NY session, buyers charged back into the market. Price not only pulled back losses, but many coins also finished the day higher. This capped off one of the most volatile sessions we have seen this year. For example, ETH finished the day with a 15% range, and SOL was close to 20% in its daily range.

This week we want to focus on another stronger coin. LUNA so far has seen a great week despite the geopolitical crisis that continues in Europe. Price has added over 20%, trading back above 65. Technically there’s a bit to like about LUNA, we can see resistance becoming support with a new higher low and this week, buyers have broken out of the range and beaten the medium to a long-term downtrend. Definitely, one to keep an eye on as we head into a new week and fresh opportunities of increased volatility. 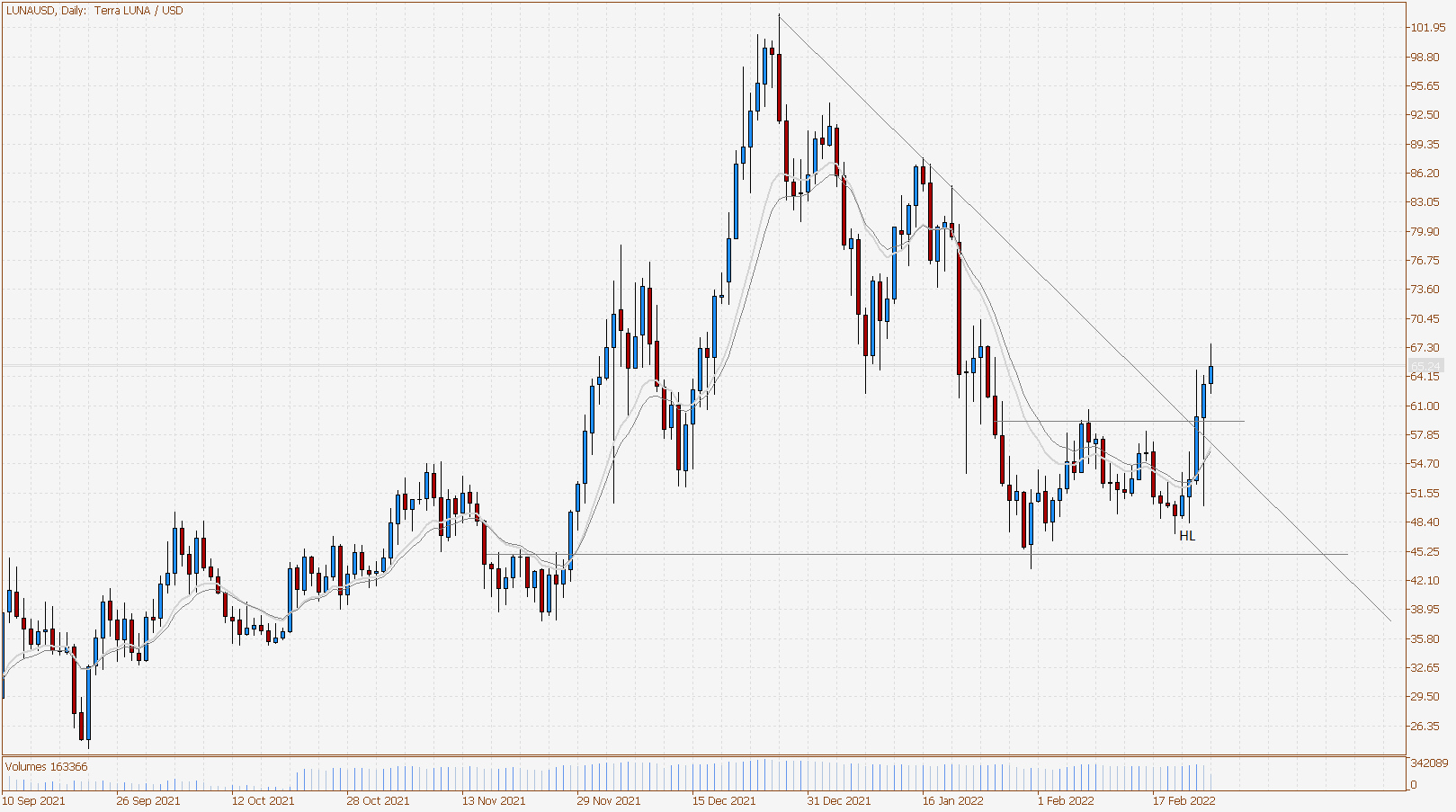