Written By: Marcus Wang and the Crypto Insights Team

The FOMC minutes released last week may have offered some hope for the eventual slowing down of the interest rate hike. The dollar is heading towards its steepest monthly decline since 2009, and the benchmark 10-year Treasury yield is down more than 30 basis points in November. Optimism is resurfacing across a range of assets as investors begin to pivot towards embracing more risks. Moving forward, insights into the Federal Reserve’s upcoming rate hike path will be tipped this week when Fed Chair Jerome Powell speaks at the Brookings Institution coming Wednesday.

The crypto market saw a rare, quiet holiday weekend. Over the carnage, titans of the industry rose as they came together to set up a rescue plan to aid troubled projects. However, there is still too much uncertainty in the market for the collective effort to be a catalyst that turns things around. Major cryptocurrencies made attempts to stabilize in their respective ranges. BTC closed the week with a marginal increase of less than 1%, while ETH jumped 4.5% week-on-week. 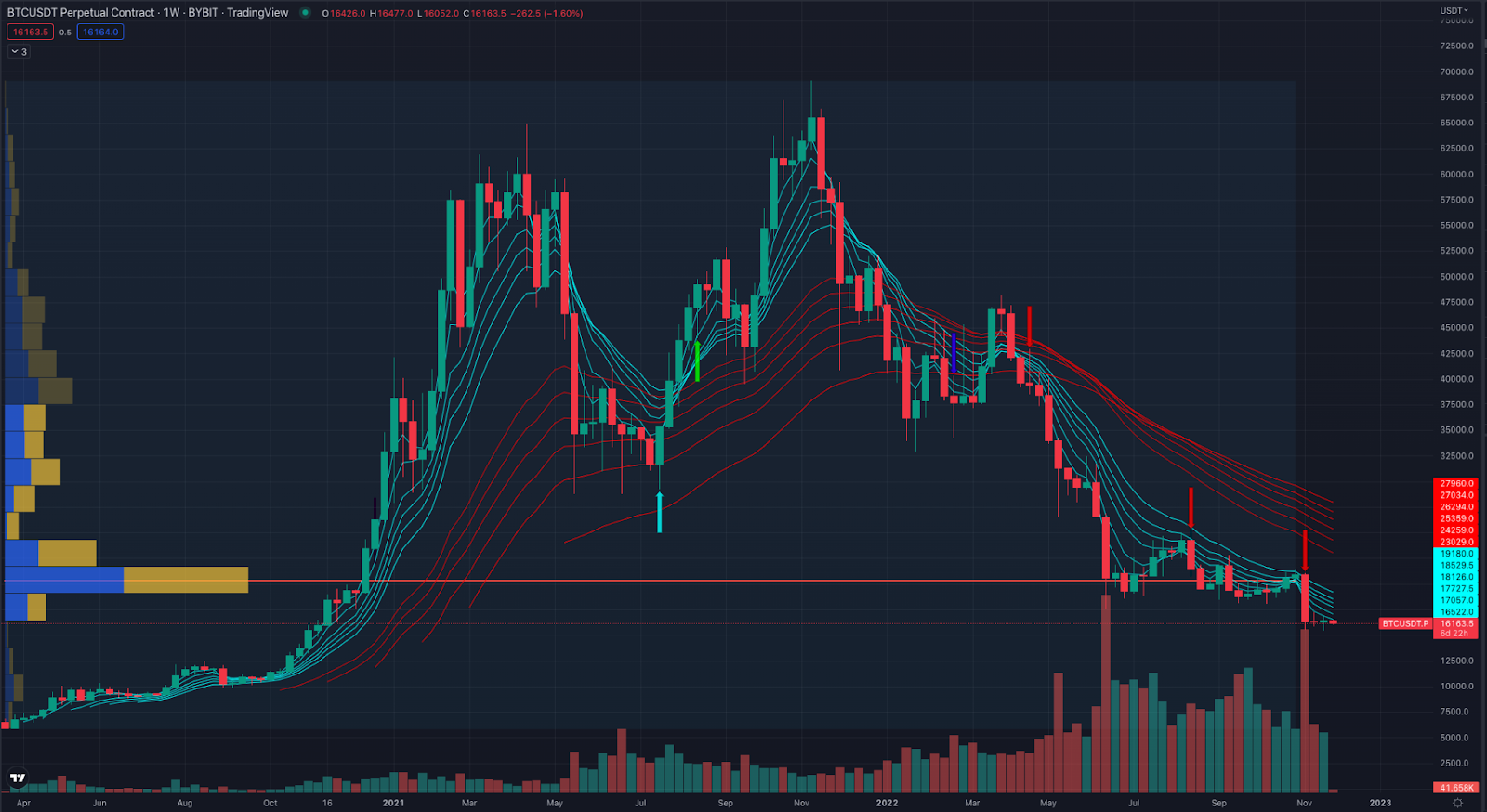 BTC price has shown early signs of stabilizing in the past week as selling pressures moderate. BTC rebounded to $16k after re-testing $15.5k, facing immediate resistance at the 20-day EMA of $17k. The rebound was likely due to a technical adjustment after RSI reached the oversold zone, while trend reversal is not on the table as the unraveling FTX saga continues to strain investors’ confidence. From a technical perspective, Guppy Multiple Moving Average (GMMA), a technical indicator that identifies changing trends and breakouts, has diverged further in the past week, suggesting an imminent break is not on the horizon.

Regarding Bitcoin’s bottom price, the maximum drawdown at 84.5% from previous bear cycles in 2013 and 2017 points to a $10.7k bottom. On the other hand, the fixed range volume profile saw strong support at $16.5k, where the price range between $16.5k and $21.5k has been traded with the highest volume since 2020. Nonetheless, if BTC, unfortunately, broke below $16.5 and took hold, the next support level at $13.5k would be relatively weak due to low historical trading volume, pointing to a possibly lower bottom price.

The 7-day moving average of the BTC funding rate has turned slightly positive in a few exchanges, indicating a relieving risk-off sentiment. However, the spread between BTC spot and futures remained deeply negative, which reveals a dim outlook for investors in the near term.

Check Out the Latest Prices, Charts, and Data for BTCUSDT! 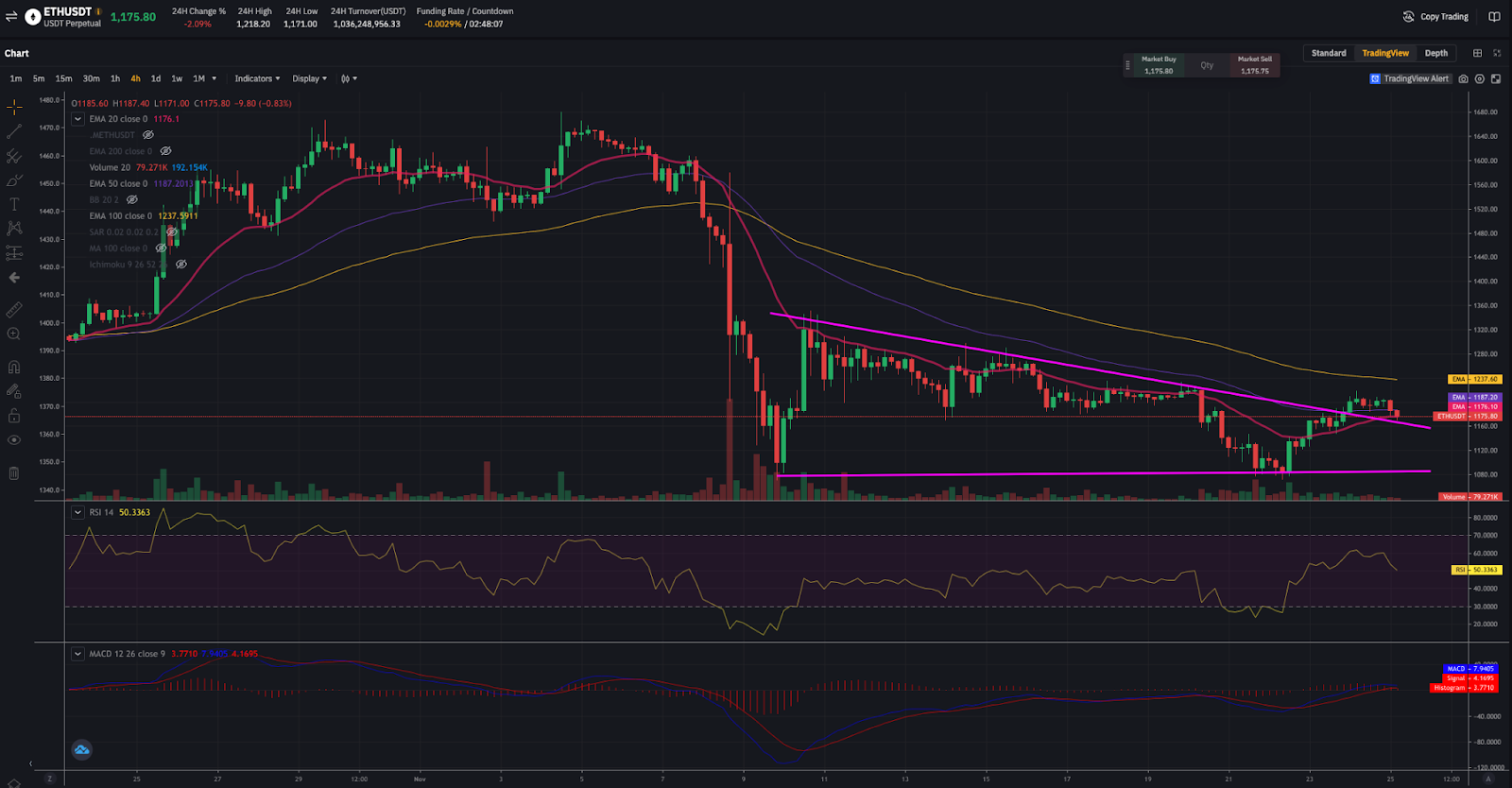 As BTC clings to near-term $15.5k support, Ether has seemingly found support at the level of $1,080. Ether seems to stay above a trendline connecting price tops after FTX’s collapse, flagging an early sign of bullish price action. Ether has hovered around $1,200 in the past few days, facing immediate resistance at the 20-day EMA of $1,230 and a 50-day EMA of $1,320. Furthermore, the Parabolic SAR indicator on a 4-hour chart, an indicator used to determine trend directions and potential reversals in price, once turned bullish as SAR dots stayed below the current price level. However, as of the time of writing, the bullish signal freshly flipped to a bearish one, dashing hopes of a turnaround.

On another note, the open interests of Ether options set to expire by the end of November have been mostly closed, leaving significant volatility induced by option activity unlikely in the coming week. Meanwhile, Ether’s open interests in call options that expire by the end of December are still five times of put options. However, the strike prices of December’s call options are way higher than the current price level, unlikely to add up to the price volatility as well.

Check Out the Latest Prices, Charts, and Data for ETHUSDT!

While major cryptocurrencies stabilized over the past week, several altcoins outperformed the broader market with staggering double-digit gains. Celo Network’s native token, CELO, is up 54.2% week-on-week, with a major technical-driven pump on Sunday. The jump came a few days after the launch of Curve Finance on the Celo network as well as a partnership announcement between Consensys and Celo to improve multichain support and scalability. Network fundamentals are improving, with the number of active developers doubling in the past month. The total value locked on the protocol, too, has surged by nearly 50% to $121 million since a week ago. 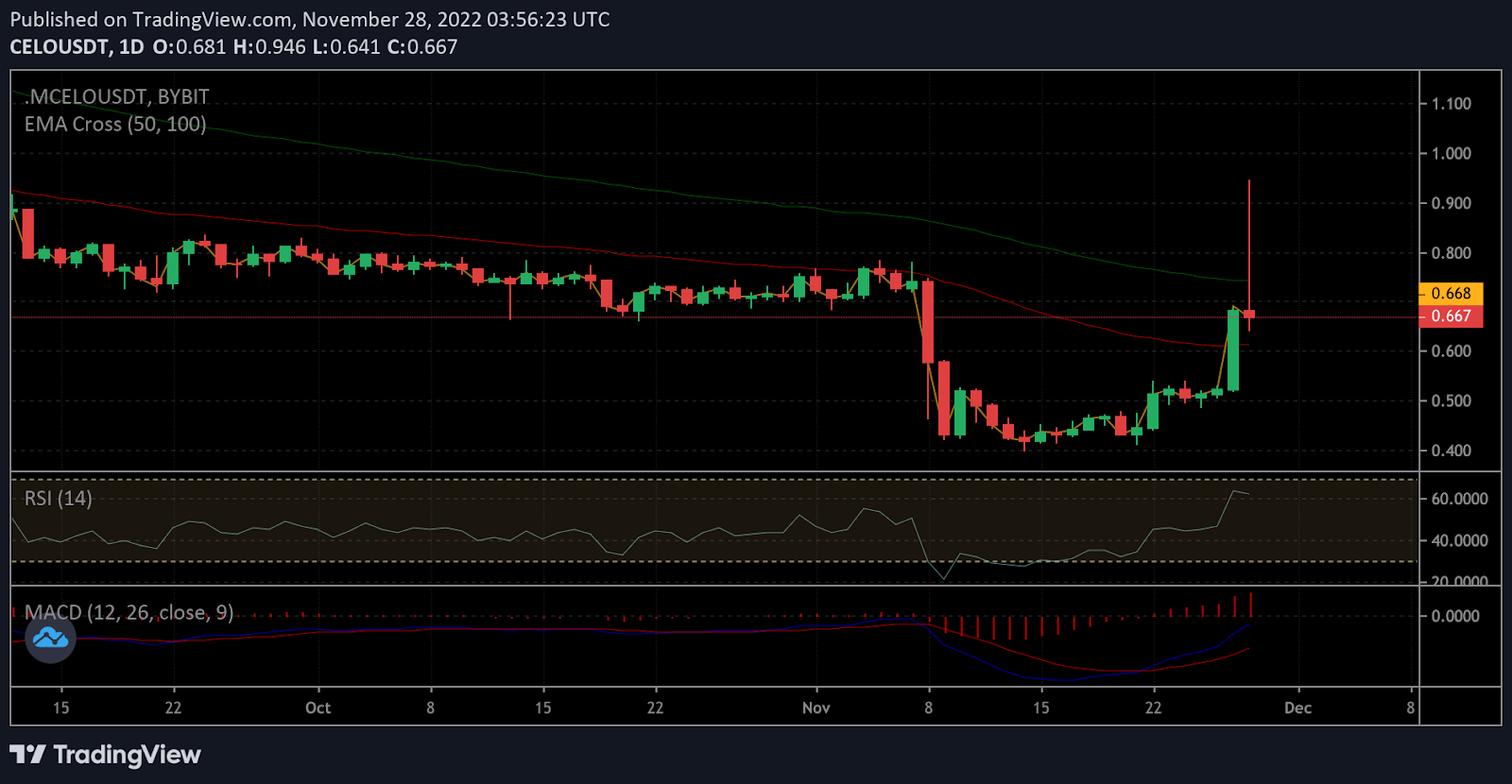 On the 1-day chart, CELO recently broke out from weeks-long resistance near the 50-day EMA and is now testing the next resistance level near the 100-day EMA. The trading volume has reached the level last seen in May, suggesting the outperformance is well supported by speculative capital. Meanwhile, RSI on the daily chart is on the high end but remains within the neural territory.

Check Out the Latest Prices, Charts, and Data for CELOUSDT!

Trade with up to 25x leverage on our new trading pairs: