How Will NEAR, BALANCER And RAMP Move In The Near Future?

At this stage, it looks like we are set for a decline in the top 25 coins, snapping a three-week winning streak that has seen just over28% added in the last three weeks. So far, the top 25 index is down a touch over 6% late in the week.

The major coins started the week with gains but found it hard to hold momentum. Selling really ramped up on Tuesday as risk markets reacted to further inflation worries. US inflation hit 40-year highs and set up a quick response from the Fed. Members said that policy adjustments would be made swiftly to try and rain in the worrying inflation. This set off the USD. The USD index quickly broke back above 99 and continued to push higher, trading up to 99.71.

As traders moved quickly out of risk assets, this looks to have been a strong factor for sellers of crypto. Tuesday was the worst day so far in the week, with over 5% taken off the top 10 and 6.5% taken off the top 25. Sellers tried to get another move going on Thursday but were rejected by buyers. Friday’s trade saw a fightback, but many coins share a similar pattern of a counter-rally after a trend break.

Friday’s session gave us a few surprises, with NEAR and BALANCER both trading over 15% higher during the session. RAMP was another strong mover, adding over 30% during Friday’s session.

Looking to next week, attention will have to remain on the inflation and policy situation of the Fed as it looks to be having an influence. We are also keen on seeing if some of Friday’s counter-rallies can become something more.

This week, due to some mixed-signal price action-wise, we’re going to break down what we see on the daily top 25 index chart. Yes, with Eightcap you can trade an index CFD over the top 25 coins.

Let’s not what we’re watching. Clearly, we can see the descending triangle pattern that buyers broke out of, which also broke the long-term downtrend. All nice bullish signs so far. We’ve seen the first leg up that could be seen as a stage one. In the short term, we’ve seen resistance and supply develop, which has stopped the trend for now. The leg lower has beaten the fast uptrend, but it’s started to find demand and support off the 50 and 38.2fib points, which show a healthy retracement area.

Where does that leave us? With mixed price signals in the short and medium-term, we want to see if buyers can maintain the fib points and make a new move to test resistance. A break of resistance and the trend should be back on. A fail at or below resistance that sets up a new lower high is a warning and could signal further seller momentum to come. If price moves back below the 50 or 61.8%, we would start to worry about the buyer’s control on the current leg high. 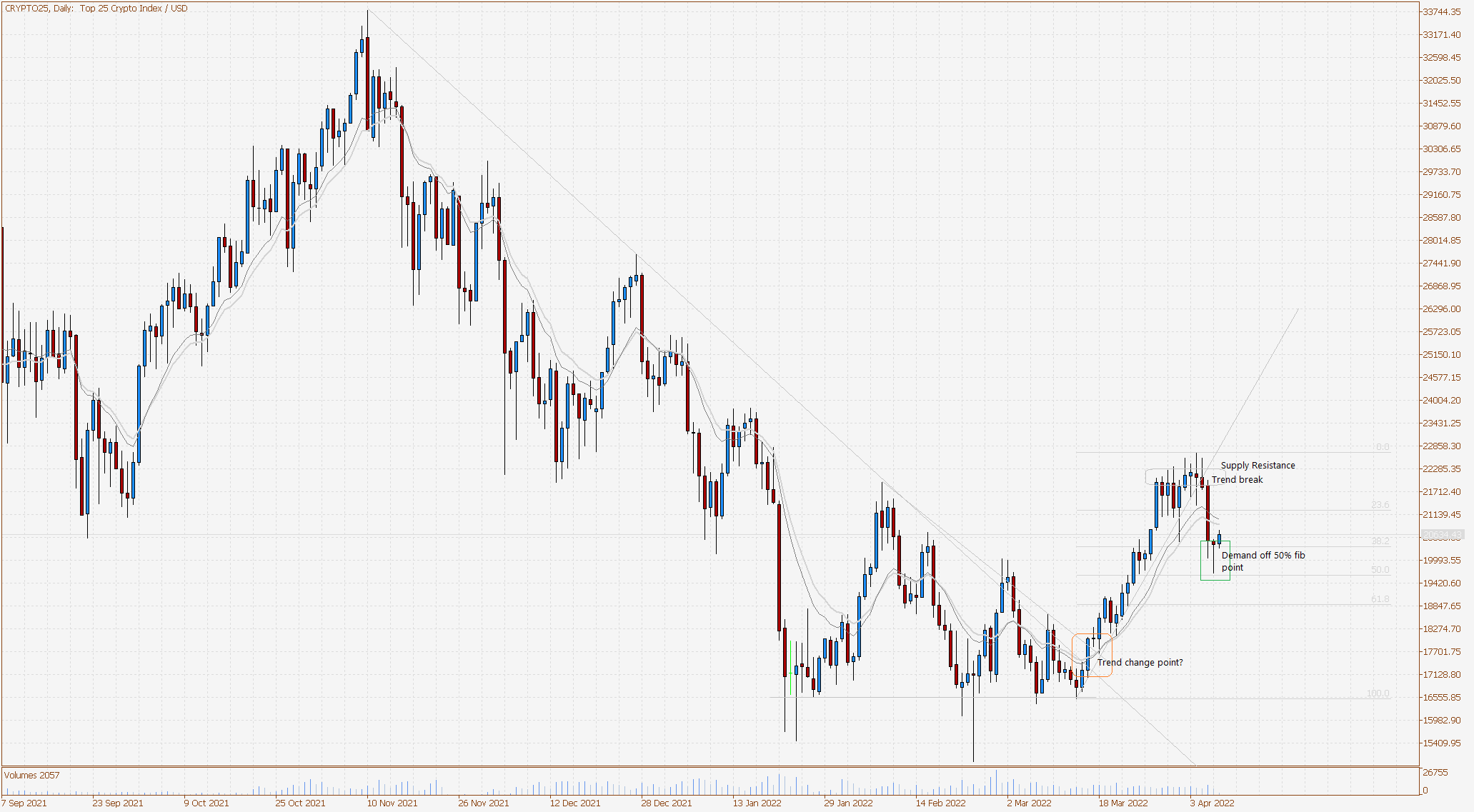