Written By: Marcus Wang and the Crypto Insights Team

The 2022 FIFA World Cup in Qatar kicked off last week and is currently all the rage. Global sports events have been known to thrust Web3 into the limelight, with Bybit’s sponsorship of Formula 1’s Red Bull team being an example. FIFA World Cup, as one of the most prestigious sports events, is no exception.

Web3 players, including exchanges and protocols, have aspired to leverage this year’s World Cup to attract more users to Web3. As such, this article aims to explore areas of Web3 that would benefit from this year’s World Cup and how. In addition, as Web3 is reeling from contagious effects induced by FTX’s implosion, we will dive into whether the FIFA World Cup hype has indeed provided a boost to Web3’s on-chain activities.

The cryptocurrency exchange, Crypto.com, is the official sponsor of the FIFA World Cup 2022. Crypto.com benefits from the publicity as the mega event’s venue and the broadcast view from the stadium will both be branded with Crypto.com’s graphics. Crypto.com has been famous for its aggressive expansion strategies by sponsoring sports events. Aside from the agreement signed with FIFA World Cup, the cryptocurrency exchange has signed agreements with the Los Angeles Lakers, and  Paris Saint-Germain, not to mention its headline Super Bowl ads that increase its search interest. As such, Crypto.com aims to repeat its previous success with expensive FIFA sponsorships. 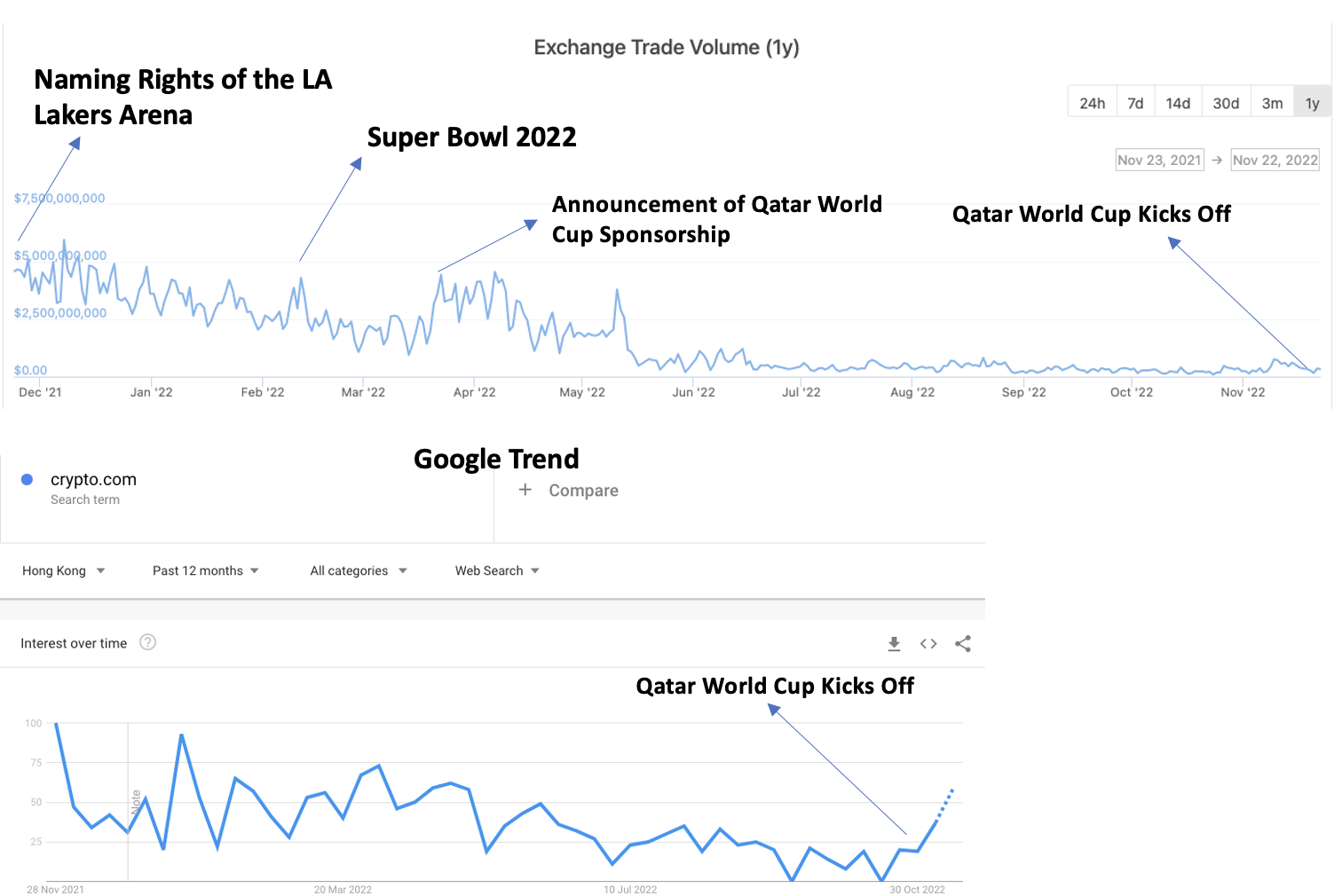 As shown in the first graph, Crypto.com’s major sponsorships in the past year have successfully led to a boost in exchange trading volume. Nonetheless, following insolvency events in May, the trading volume plunged and has since remained flat. As World Cup 2022 kicks off, trading volume seems to recover slightly with the help of FIFA’s publicity, while search volumes have shown an early sign of recovery, suggesting that Crypto.com could possibly have acquired some users from the sponsorship.

While crypto trading does not equal enhanced Web3 adoption, the user on-ramp by centralized exchanges is essential to boost users’ accessibility to Web3, laying the foundation for a thriving Web3 space. Apart from direct sponsorships, other prominent crypto exchanges, such as Bybit launched a series of “Crypto Cup Kickoff” events to reward users with a 500k USDT prize pool and NFTs up for grabs. If the user search interests can build into the future, World Cup 2022 may help attract new users to crypto exchanges and revive Web3 adoption accordingly.

FIFA launched the FIFA+ Collect platform, an NFT marketplace empowered by the Algorand blockchain, where FIFA fans can purchase FIFA Archive Drops, which are video snippets of highlights from previous FIFA World Cups transformed into NFTs. Some of the most expensive NFTs in the marketplace as of the time of writing are Colombian player James Rodrigez’s goal against Uruguay in the 2014 World Cup for $10,000 and French player Kylian Mbappe’s goal against Argentina at the 2018 FIFA World Cup for $4,200. FIFA’s cooperation with Alogrand brought digital assets front and center and bodes well for NFT adoption in global sports events. In addition, FIFA fans can purchase the NFT collections by credit cards or USDC, effectively removing the payment barrier that disconnects real-world users from buying NFTs.

However, the sales of collectibles on FIFA+ Collect have been lukewarm. Looking at the primary sales of card packs, we can see a massive spike in mint volume in late October, 2022. This corresponded to the period when prominent influencers on Twitter started talking about the FIFA+ Collect and its potential to become the next NBA Top Shot. However, the volume has since fallen back to the baseline, with less than 12,000 cards minted daily.

Apart from the official FIFA collaboration, another top-ranking football-themed NFT on Algorand is World Cup Goanna, a special set of commemorative NFT spin-offs of Al Goanna, the leading NFT projects on the Algorand blockchain. The collection saw a strong start immediately after its release but has since spiraled down in both volume and average price.

Another football-inspired NFT memorabilia platform is LaLiga Golazos. The platform is the collaboration between LaLiga, the premier soccer league organization in Spain, and Dapper Labs. Laliga Golazos is conceptually similar to FIFA+ Collect as it allows users to purchase NFTs with videos of the most memorable goals from 2005 to present. The platform was launched on Oct 27, 2022 and dropped its first pack on the same day.

Performance of Flow and Algorand Blockchain 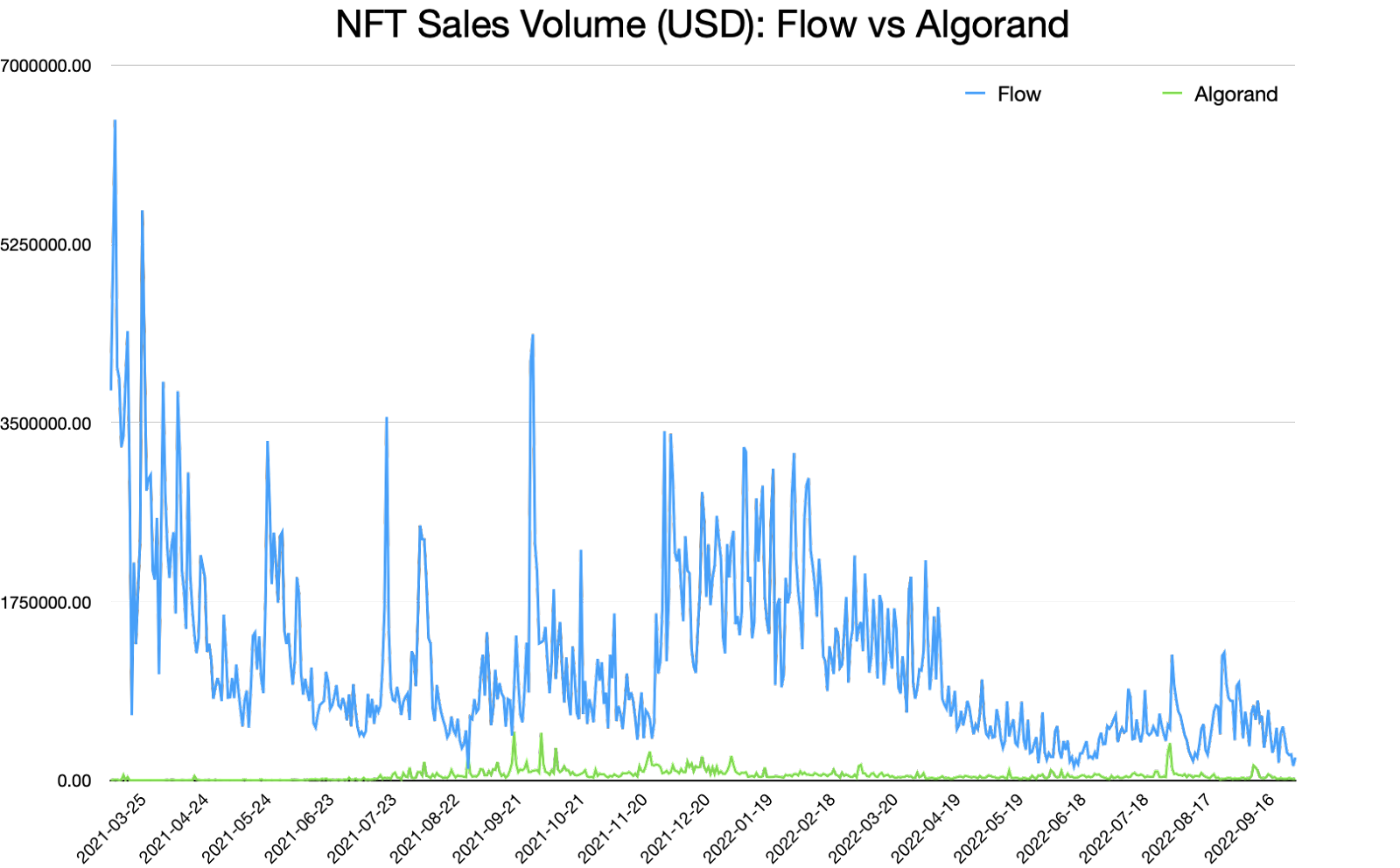 The above graphs suggest that both blockchains present a general downward trend in sales generated. The FIFA partnership announcement in September may be responsible for the initial spike. However, the momentum soon lost steam as the sales volume retracted to its baseline. As such, the boost from World Cup 2022 on Algorand’s NFT sales was short-lived.

FIFA-related NFTs were introduced in the midst of a prolonged bear cycle, while the World Cup 2022 opening coincided with the unraveling of one of the most influential centralized exchanges, FTX. This was a period when market liquidity evaporated rapidly as the market began to absorb the aftershock of the FTX collapse. With the broader market embroiled in turmoil, it is unlikely for those FIFA-related NFTs to replicate the trajectory of NBA top shots, one of the most successful sports NFT projects atop Flow blockchain.

The cooperation with FIFA sends a tailwind towards the adoption of Algorand and Flow blockchains, two of the prominent NFT-focused blockchains. However, the short-term boosts have yet to  spur overall NFT sales remarkably on the two blockchains as the cryptoverse is still reeling from rippling effects in the wake of FTX’s collapse

Sorare is a fantasy sports game protocol built atop Ethereum Layer 2 with Starkware’s Validium technology. As the transactions are conducted off-chain, no gas fees are paid by users when interacting with the protocol. Sorare is essentially a football card game where users compete with each other to win prizes with rare NFT cards. NFT cards represent famous football players with different characteristics for in-game play.

Sorare owns a first-mover advantage in the football blockchain game, where it has signed up with soccer stars Lionel Messi and Kyle Mbappe to attract football fans to the Web3 space. In addition, Sorare has launched a global cup promotion event to jump on the wagon of the FIFA World Cup 2022, featuring football players from over 300 officially licensed football clubs for users to select from.

However, the FIFA promotion has failed to gain traction. The activities of transfers and minting of NFTs on Sorare, as shown in the above table, have declined since July and remained flat, except for a short-lived increase in early September.

Besides Sorare, other less-known blockchain football games seem to benefit more from the FIFA hype. Ultimate Champions is one example, which bears a resemblance to Sorare as a fantasy football game with digital NFT cards on Polygon. The on-chain transactions of Ultimate Champions have increased to an average of 10k to 60k on Nov 17, 2022. Despite falling to 10k after a few days, the daily transactions have remained elevated relative to the historical levels. We have noticed similar trends for The Football Club, a metaverse football game built on the Flow Blockchain.

In conclusion, it seems relatively less known if blockchain football games have taken off from the FIFA Hype, with new users flowing into their ecosystem. FIFA has successfully boosted the usage of football games in game blockchains. In comparison, Ethereum-native Sorare has lost ground in the competition, possibly due to a weaker gamer community on Ethereum or ineffective marketing campaigns.

Fan Tokens — Fans Come Pouring in to Support Their Countries

Fan tokens are fungible cryptocurrencies, owning such tokens would provide one with the ability to vote on team decisions and compete for goods, such as VIP experiences, exclusive merchandise, tickets, etc. Chiliz is the first and the most reputable issuer of fan tokens in the space.

Chiliz is the team behind Socios.com, the prominent sports fan engagement platform built on the Chiliz blockchain. Socios.com App and Chiliz Exchange are the main products launched by the team. $CHZ is the native currency for the Chiliz ecosystem and is used to facilitate the buying and selling of fan tokens. For example, $PSG represents fan tokens officially issued by Paris Saint-Germain Football Club on Socios.com. Read here for more details on fan tokens. 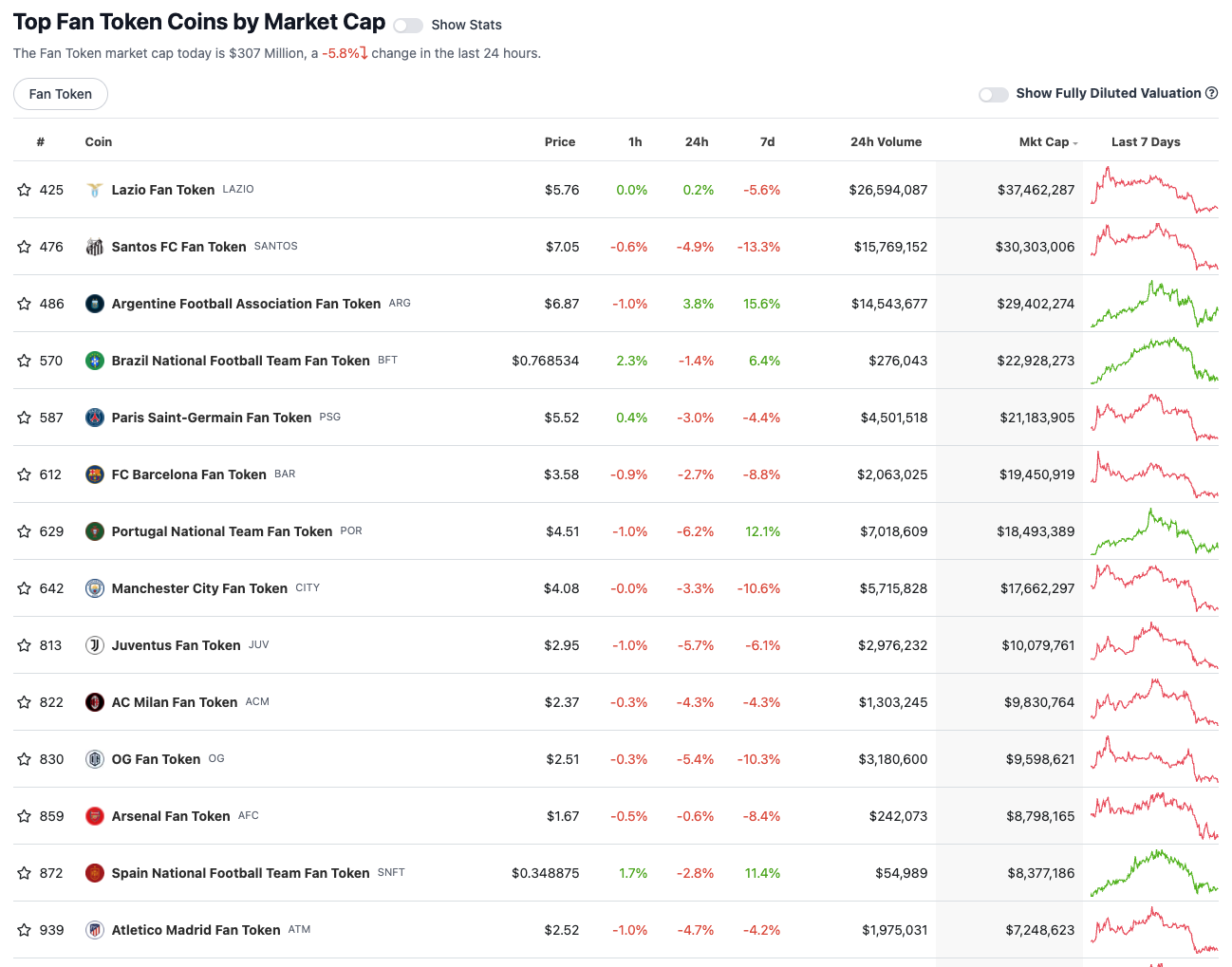 The price movements of country fan tokens are likely linked to the performance of the specific country’s football team performance in World Cup 2022. Fans might be compelled to buy fan tokens to receive fans' rewards if their favorite teams fare well during the 2022 World Cup. For example, as fans get used to the fan token concept, they may continue to stay on Socios.com and switch to their football club fan tokens, later on, suggesting the FIFA hype could possibly act as a gateway and help boost Web3 adoption.

Country fan tokens such as Brazil National Fan Tokens (BFT) are not listed on Socios.com and are directly traded on centralized exchanges. Despite the backup by respective national team associations, owners of country fan tokens are not entitled to the streamlined fan engagement experience offered by Socios.com. Therefore, it is more likely that country fan tokens that are released only on centralized exchanges are more speculative and may experience volatility once the hype subsides. As a highlight, all fan tokens traded on Bybit are football club fan tokens. Trade and share up to 300,000 USDT in prizes here.

The above shows that CHZ transactions have rebounded since August and soared as the FIFA hype looms. CHZ transactions indirectly reflect the demand for fan tokens released on Socios.com, as users have to swap CHZ with fan tokens, suggesting that the FIFA World Cup 2022 has indeed boosted the adoption of fan tokens.

In comparison, blockchain games such as Sorare have failed to catch the hype, while new football games such as The Football Club, although spurred by the FIFA hype, have failed to maintain the hype as fan tokens. As such, fan tokens seem to be embraced more by real-world users and may continue to gain popularity even after World Cup 2022, particularly football club fan tokens.

FIFA World Cup 2022 has brought something relatively new to the sports industry with the participation of crypto brands and Web3 applications, as it is such a large-scale event. FIFA-related NFTs, blockchain games, and fan tokens have seen boosts from the FIFA hype. Unfortunately, as the cryptoverse is in the throes of an FTX-induced industry shuffle, the Web3 adoption brought by FIFA has turned out to be less significant than expected. However, this positive impact is unlikely to dissipate even after the World Cup 2022 concludes. As such, the football blockchain games, fan tokens, and NFTs may instead continue to gain traction in the future as fans can engage with their favorite football clubs through Web3 applications, illustrating next level opportunities in the industry despite current sentiments.