Most of the cryptocurrencies ended up in the heavy red over the past week, with most reaching double-digit losses. The overall cryptocurrency market volume in the past 24 hours came up to $60.83 billion - a drastic drop of over $17 billion from the past week. The overall crypto market cap decreased slightly compared to the previous week, coming up to $1 trillion, a slight decrease from the previous week’s $1.15 billion.

Bitcoin's dominance has remained below the 40% mark but increased slightly to 39.31%. This came as a result of BTC outperforming the top cryptocurrencies by making a smaller downturn. The most valuable cryptocurrency pair, BTC/USDT, is currently trading at $21,293.62, while Ethereum, the second-largest cryptocurrency by market capitalization, has fallen to $1,570.88, down 18.92% in the last week.

Ethereum 2.0 Merge in the Limelight, PoW Ethereum the Talk of the Town

The Ethereum blockchain is on track to make its highly anticipated transition from its current Proof-of-Work (PoW) consensus mechanism to a Proof-of-Stake (PoS) one. The Merge date is officially scheduled for Sept. 15–16 after the successful final Goerli testnet integration to the Beacon Chain on Aug 11.

However, not everything is going smoothly, as a group of miners and PoW supporters have announced that they will opt to hard fork Ethereum and continue operations on the new version. Chandler Guo, a Bitcoin (BTC) miner, was among the first to bring out a case for the PoW Ethereum chain post-Merge. In a tweet on July 28, Guo shared with the public a screenshot of Chinese miners saying that PoW Ethereum is coming soon.

However, Vitalik Buterin has denounced those who are in favor of PoW Ethereum, claiming that the move is just a ploy for miners to make easy money without benefiting humanity - especially after them declining to move to ETC, a Proof-of-Work Ethereum fork from 2016.

Charles Hoskinson, the founder of Cardano, has come out to speak about how the issues surrounding the Cardano Vasil hard fork have been “incredibly corrosive and damaging.”

After a rumor broke out that Cardano’s testnet is “catastrophically broken,” Hoskinson stated that there’s been an “unfair narrative” floating around Cardano and its testnet issues, which he called “incredibly corrosive and damaging.”

He spoke about how people can and should not conflate a failed testnet with the mainnet, because testnets are constructed and destroyed all the time in this industry. He then added that “They are in no way, in any way harm Cardano itself.”

The Vasil hard fork has already been delayed several times this year, with the most recent delay being announced at the end of July due to issues identified on the testnet. Hoskinson, however, remains optimistic that the Vasil hard fork will ship “imminently.”

The percentage of USD Circle (USDC) stablecoins held by the top 1% of wallet addresses dropped to its lowest point in almost two years as the crypto market downturn continues.

While the real reason or reasons for this are unknown, various commentators have suggested that some users shifted their stablecoin holdings from USDC to USDT. This claim was made given the correlation in the decline and growth of the respective stablecoins’ market cap.

Data from Glassnode, an on-chain analysis firm, shows that the percent of USDC held by the top 1% of addresses is currently at a 22-month low of 87.667%.

However, even though the market cap of USDC ended up reducing somewhat, the stablecoin reached a three-year high in terms of weekly mean transaction volume, surpassing the previous high it registered in June of this year.

Tether had previously made an announcement that they intend to reduce their commercial paper holdings to 0% by the end of October 2022. Data from this report revealed a 58% decrease in commercial paper exposure since the previous quarter. When translated into dollar value, this is a decrease from $20 billion to $8.5 billion.

The CTO of Tether, Paolo Ardoino, tweeted that Tether plans to continue to decrease its commercial paper holdings to $200 million by the end of August, and to ultimately reach zero by the following October.

The fear and greed index continues to signal "fear," with an index indicating a 29 score. Fear levels have increased greatly since the past week, with the market now being much more fearful than on Monday past week, when the Index showed 45. 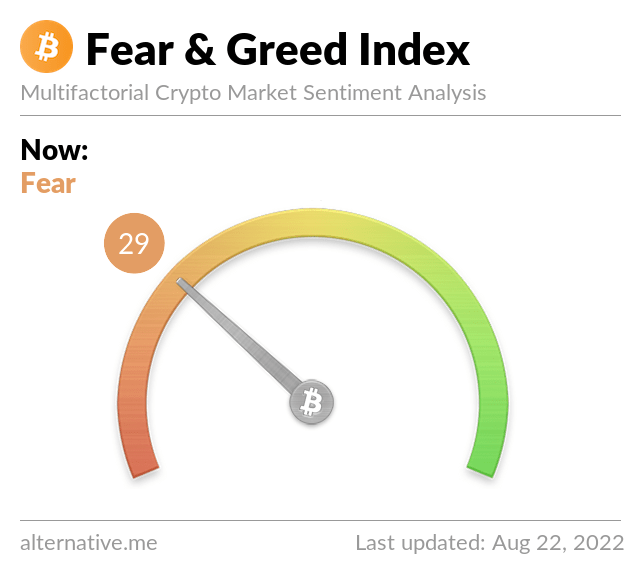 Bitcoin has had a very bad week, with its price slowly recording double-digit losses and dropping below several support levels. The largest cryptocurrency by market cap has seemingly failed to maintain the uptrend it kept for over a month, while also falling below the 21-day moving average level.

Analysts are predicting an even further drop due to worldwide uncertainty, with long-term lows possibly hitting the low teens.

Bitcoin’s immediate support level stays at $21,000, while its immediate resistance level lies at the 21-day moving average, currently sitting at $23,100.