Relevance up to 09:00 2022-08-09 UTC+2 Company does not offer investment advice and the analysis performed does not guarantee results. The market analysis posted here is meant to increase your awareness, but not to give instructions to make a trade.

Bitcoin continues to convince the market of the full start of the recovery season and closes another trading week on a bullish note above $23k. In total, over the past eigth weeks, the cryptocurrency has managed to close weekly trades with a green candle five times. The dynamics is evident and consist in a gradual reversal of the trend. In addition to the upward price movement, this is also seen by the main metrics that reflect investor sentiment. 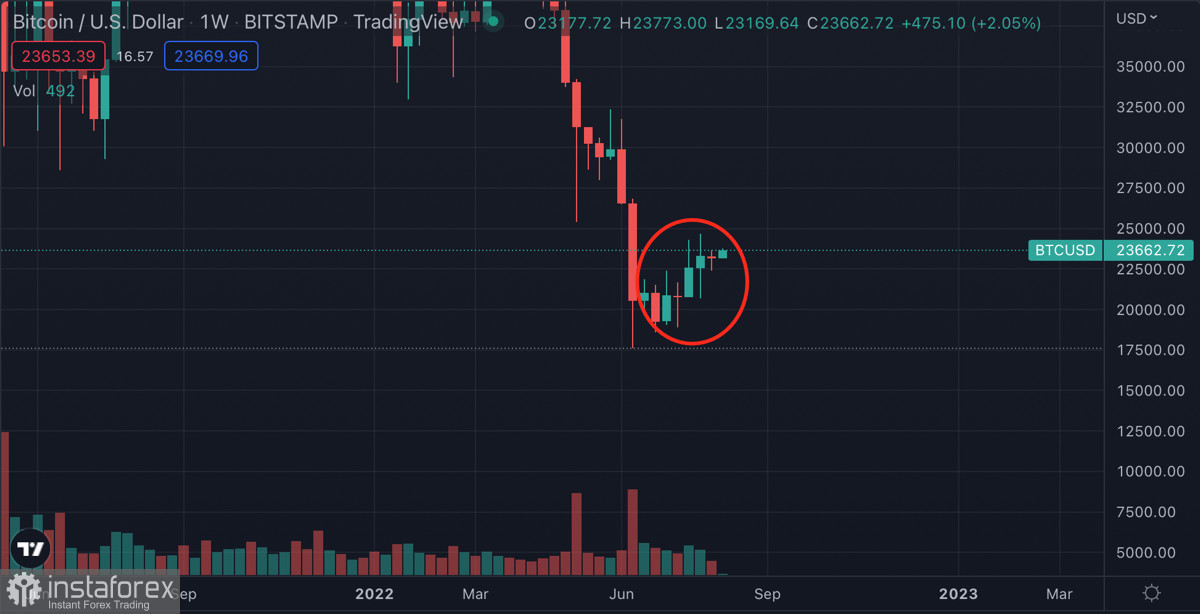 The Fear and Greed Index, which has been below 10 for a record amount of time, made an upward spurt and reached the level of 30. Considering the situation in which the market found itself in June, this is a significant breakthrough, indicating a growing interest in Bitcoin.

This is confirmed by the number of unique addresses in the cryptocurrency network, which reached the million mark last week. Over the weekend, the figure expectedly dipped to 600,000, but given that a month ago, this number of addresses was the peak, the figure is at a high level. 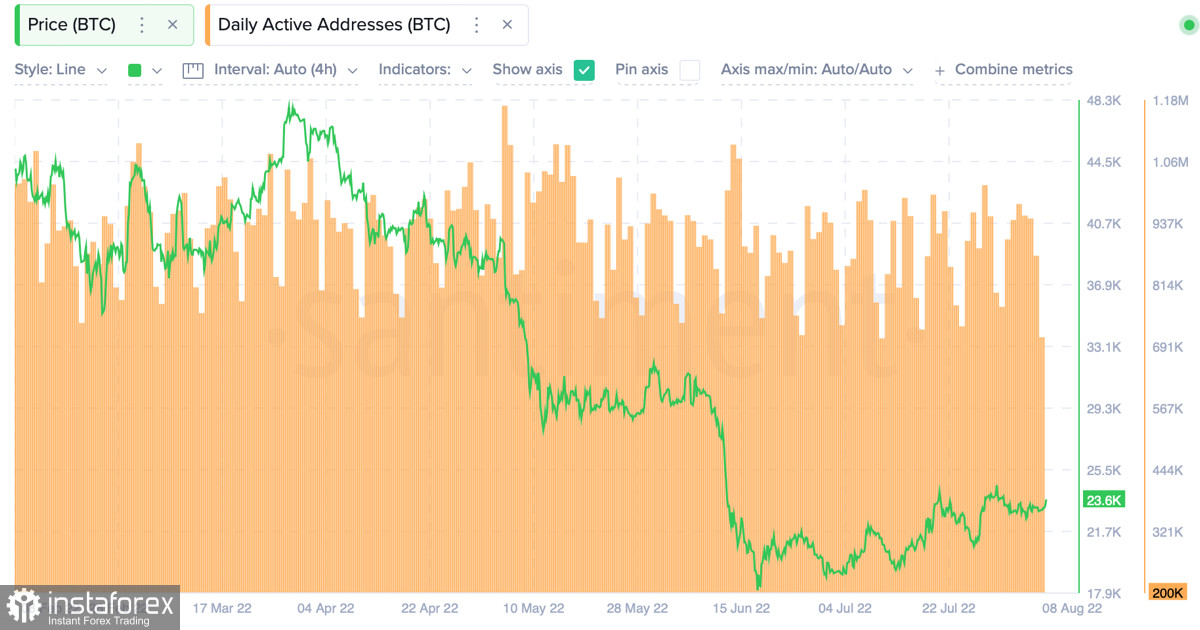 At the same time, there is a continued trend to reduce the volume of Bitcoin daily trading. Over the weekend, the metric dropped to $17 billion, which is low even with the weekend. This is an unhealthy trend that indicates an increase in the activity of addresses that cannot provide a high level of trading activity. As a result, we are seeing a significant increase in the volume of unique addresses and a downward trend in BTC trading. Such a divergence could mean problems at the bottom of the upward trend formed on the Bitcoin chart. 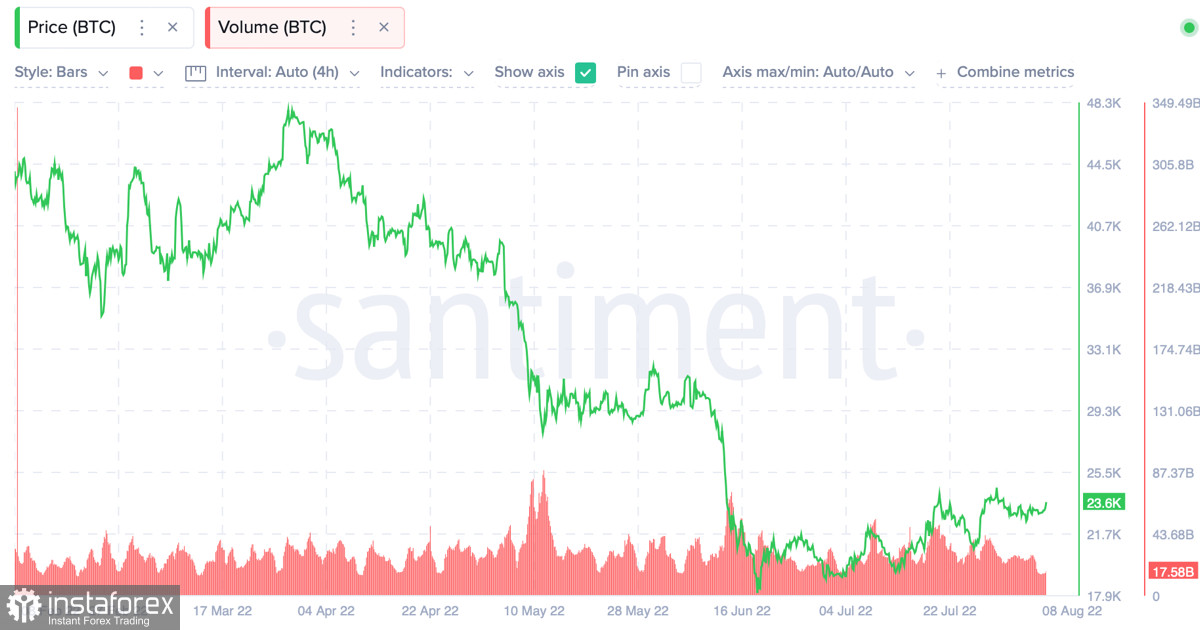 On the daily chart of the cryptocurrency, we see that BTC again briefly became a stablecoin, which is moving around the $23k level. The asset continues to maintain the structure of the upward trend from June 19, which suggests the formation of a local bottom at $17k. It is also important to note that the cryptocurrency exited the $19k–$22k fluctuation range and successfully consolidated above $22.6k, where the key support zone of the new range of $22.6k–$24k lies. And despite the successful consolidation of the asset above $23k, Bitcoin does not show prospects for an upward trend. 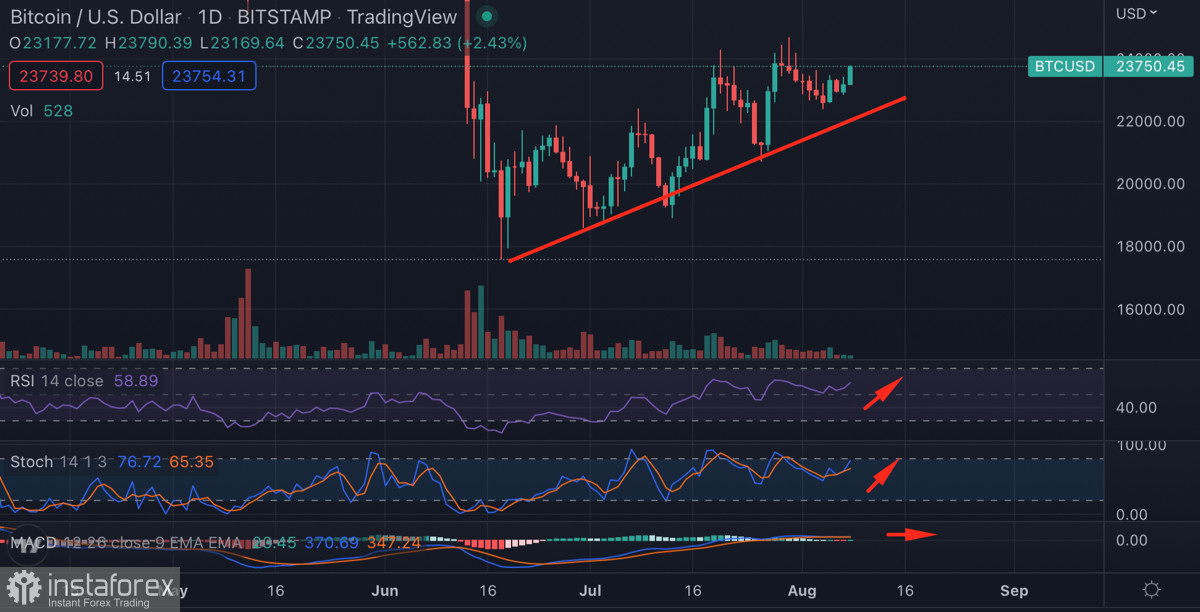 On the daily chart of the cryptocurrency, the prerequisites for an upward movement are visible. The RSI index continues its upward movement to the level of 60, which is a positive signal indicating the growth of active buyers. The stochastic oscillator has also formed a bullish crossover and continues to move above the 60 mark. However, it is important to take into account the gradual recovery in trading activity after the weekend and not to pay too much attention to the current upside signals on the charts.

As was noted, trading volumes continue to decline and reach local lows. In such a situation, it is not worth hoping for an upward movement, but it is quite possible to restore trading activity on the eve of the working week. August 10 will also be an important factor that slows down the formation of upward impulses. On the said day, the US will announce the results of the July Consumer Price Index (CPI).

Forecasts assume that the CPI will be at the level of 8.7%. Accordingly, we can assume that this figure is already considered in the current price of BTC. The cryptocurrency will move depending on the results of the CPI report. If it is higher than expected, a retest or a breakdown of the $22.6k level is quite likely. If the indicator turns out to be lower than expected, we can expect an increase in trading activity and another attempt to break through $24k.