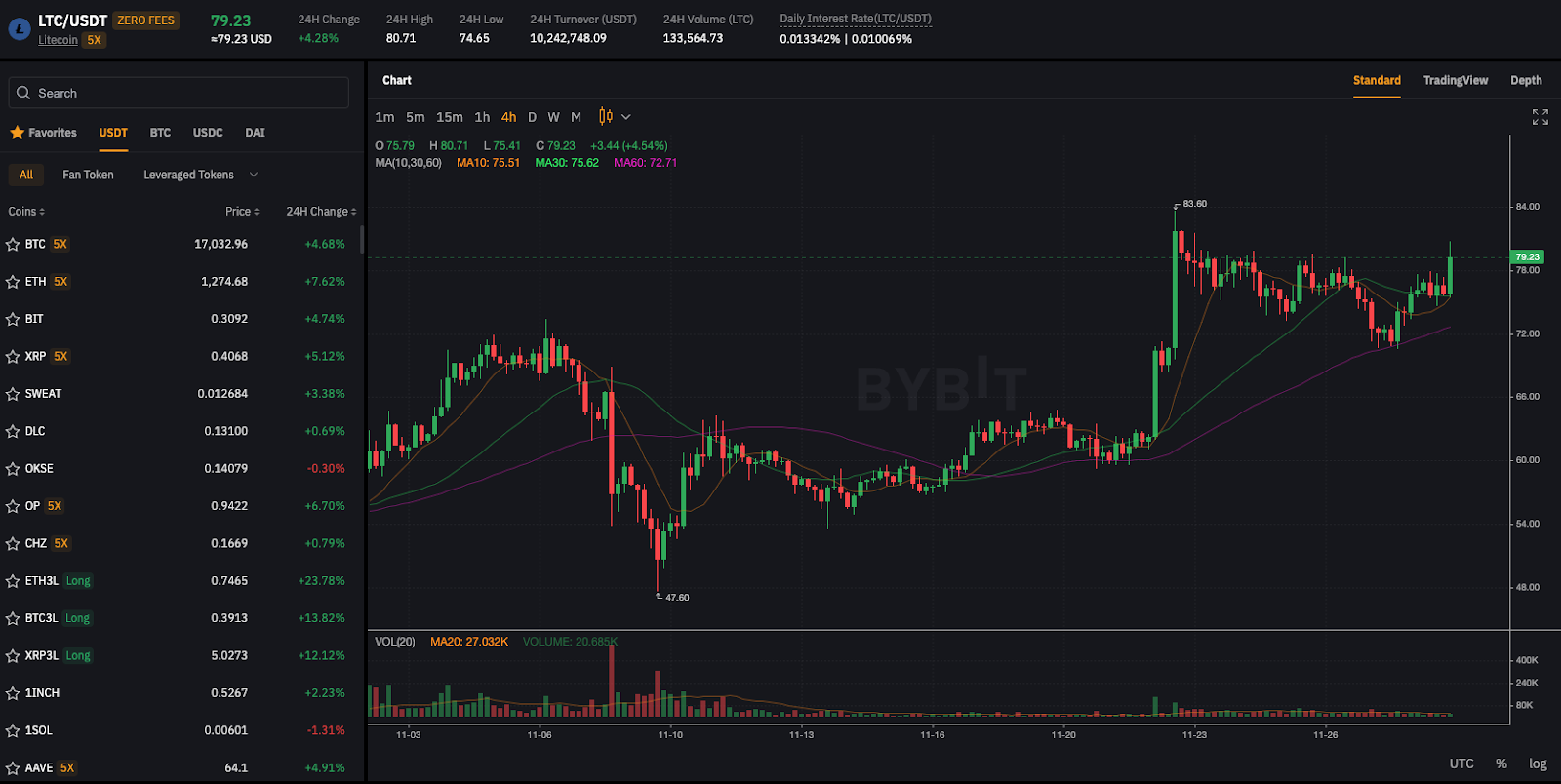 Litecoin (LTC) is the third largest proof-of-work (PoW) token by market capitalization, trailing behind Bitcoin and Dogecoin. Litecoin has outperformed most top PoW tokens due to anticipation around its upcoming halving that is slated to happen in August 2023. Litecoin was created based on Bitcoin but differs with shorter block time and lower transaction fees, making it a better fit for on-chain payment functions. Litecoin is our top pick of PoW tokens due to two reasons.

First, in the previous halving cycles, Litecoin had established price bottoms four and nine months prior to the actual halvings respectively. If history is any indication, LTC’s price will likely see a positive price trend in the eight months that lead to the imminent halving. Second, as on-chain activities have shrunk due to an extended bear market, alternative Proof-of-Stake (PoS) chains have lost their luster as users focus on decentralization instead of utility. Centralized PoS chains can mint tokens if needed during a liquidity crisis, leaving investors at risk of seeing tokens drop to zero. In comparison, the minting schedule of PoW tokens like Litecoin is stipulated at the genesis and is immune from the supply shock risk.

Bybit offers Zero Fees for All spot pairs! Check Out the Latest Prices, Charts, and Data for LTCUSDT!

Chart of the Day 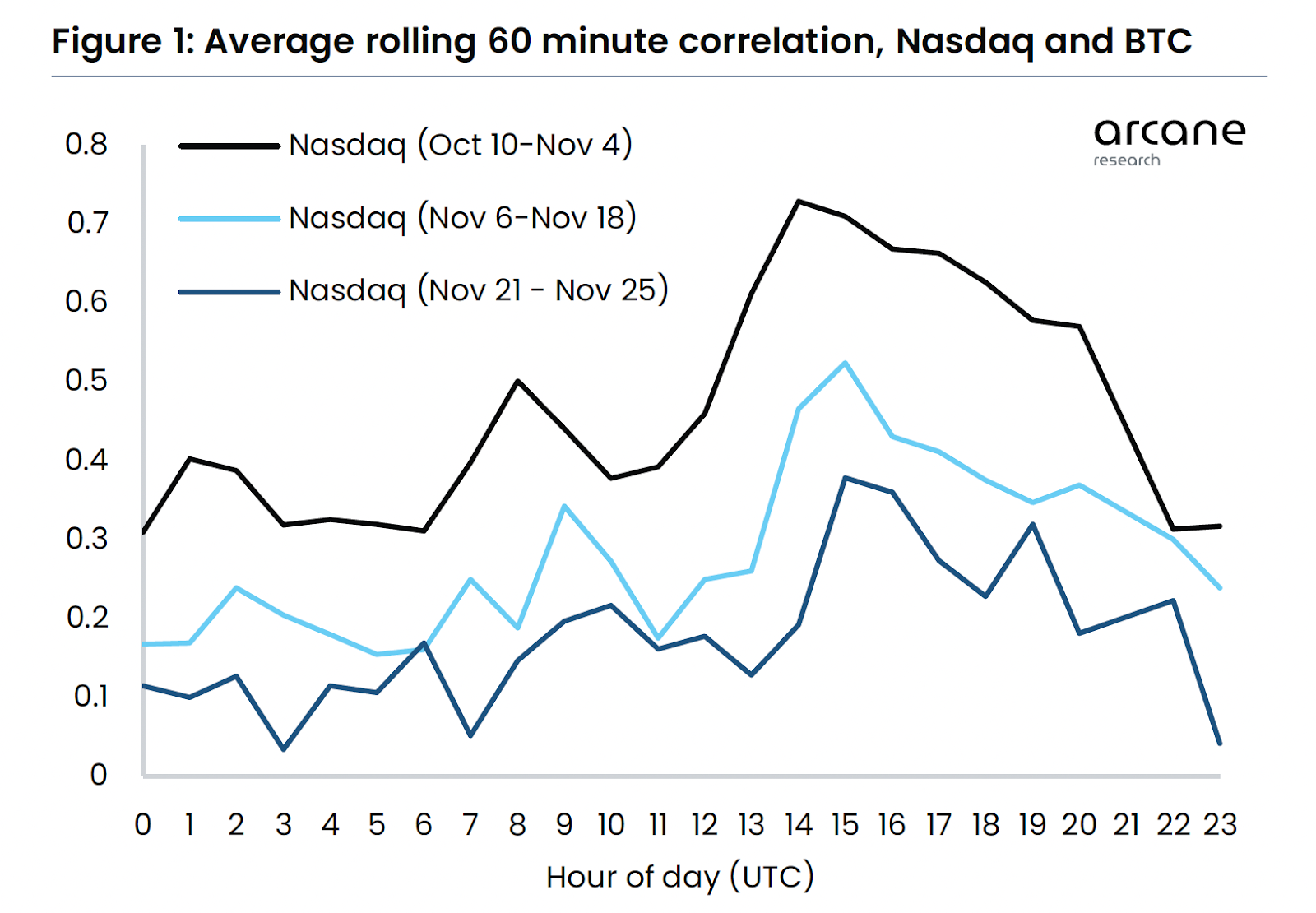 Stocks closed lower on Tuesday as traders tread cautiously ahead of Federal Reserve Chair Jerome Powell’s speech on Wednesday, which will likely cement expectations of slowing the pace of rate hikes. The broader crypto market extends its rally into early Wednesday (Asian trading hours), with major cryptocurrencies staging a strong comeback from Monday’s fall, in spite of the latest implosions. In light of the recent crypto-specific contagion, correlations between BTC and US equities, be it long-term rolling correlations or intraday price patterns, have declined significantly. BTC’s drawdown from its ATH and drained liquidity may have led to stickiness of a weaker correlation, as its price became less sensitive to improvements in macroeconomic data. However, nonfarm payrolls and Powell’s speech this week will provide clues as to whether the structural correlations have indeed softened.

As of the time of writing, BTC is charging at the $17k handle, after a 4.4% jump in the last 24 hours. A successful breakout above this resistance zone will likely usher in a new round of momentum for the largest cryptocurrency. ETH fares even better. The second-largest cryptocurrency by market cap is changing hands at the upper region of the $1,200 handle, after rising by 7.6% in the same period. Major altcoins spent another day in the green, with Huobi Token leading the pack on a double-digit percentage gain. The jump is related to Huobi’s latest announcement of airdropping the new “Dominica coin”, which is set to launch on the Tron blockchain.

Talk of the Town 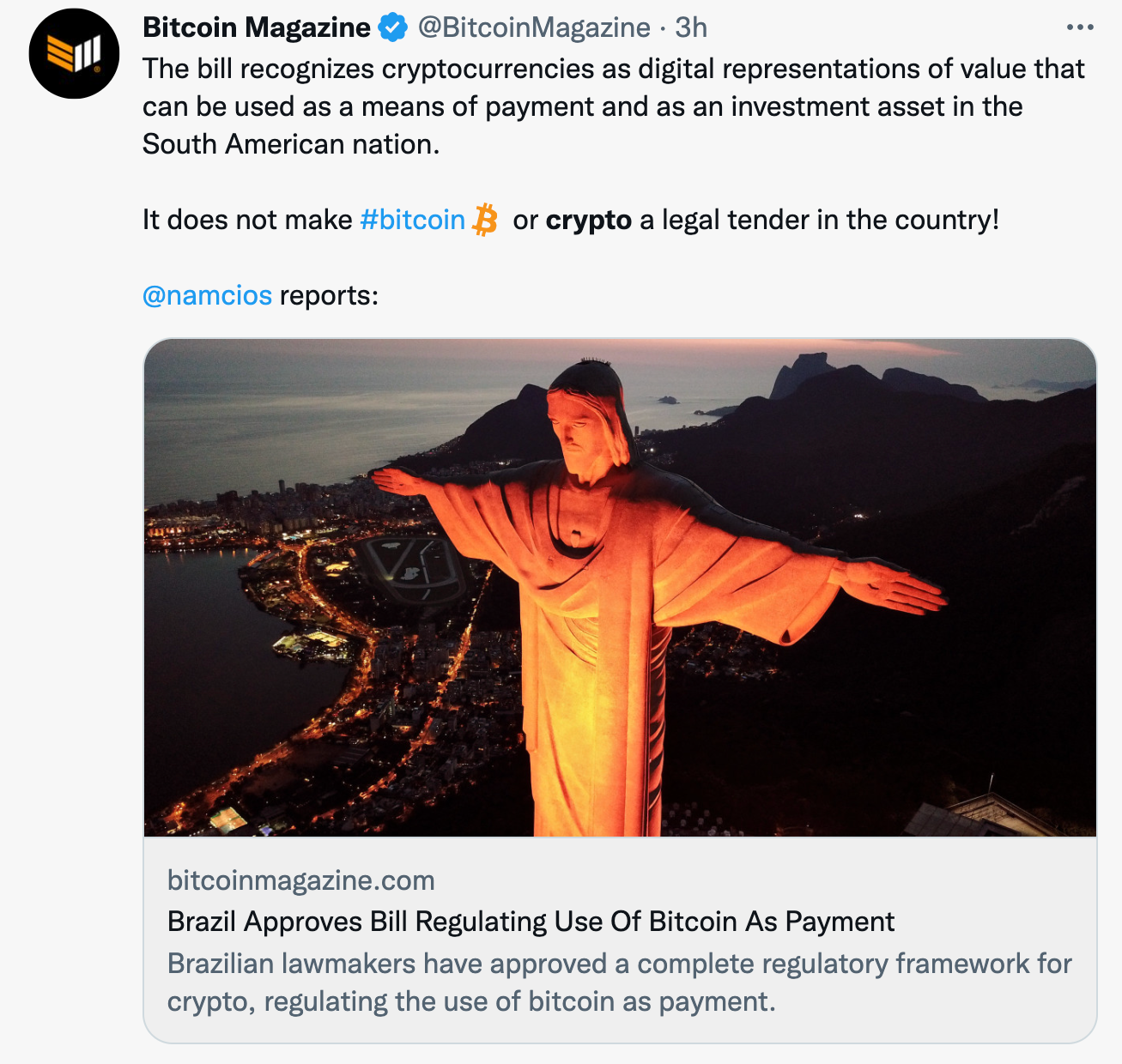 After a series of twists and turns over the past seven years, Brazil’s lower house of Congress finally approved a long-awaited crypto regulation bill that aims to boost oversight of the country’s cryptocurrency sector. The bill will pass to outgoing President Jair Bolsonaro, whose term ends on December 31,  2022, for approval. The regulation serves to define digital assets and their service providers, while subjecting the sector to oversight by a government-appointed federal agency. It also recognizes BTC as a digital representation of value that can be used as a means of payment and an investment asset in the South American nation. The move is a response to the collapse of FTX and affiliated institutions earlier this month, and a contingency of the nation’s expanding crypto market, as Brazil becomes a top-ranking nation on Chainalysis’s latest Global Crypto Adoption Index.