Celsius Bankruptcy - What Supported The Fall Of The Crypto Lender?

Relevance up to 14:00 2022-07-21 UTC+2 Company does not offer investment advice and the analysis performed does not guarantee results. The market analysis posted here is meant to increase your awareness, but not to give instructions to make a trade.

At the time of writing, bitcoin has already surpassed the $ 23,800 mark and is certainly going for the $ 24,280 level of resistance. Ether is likewise on the verge of revising its monthly limit. Before discussing the technical picture, however, it is important to note that the increase in optimism on the cryptocurrency market and the American stock market is directly tied to a decline in concerns that the Federal Reserve System will continue to hike interest rates rapidly. The recent impact of the US central bank's tightening of monetary policy on risky assets has been significant, resulting in a decline in the values of cryptocurrencies and the stock market.

The US central bank is anticipated to raise interest rates again at its next monetary policy meeting. However, economists anticipate a less aggressive hike of 75 basis points rather than 100 basis points, as predicted last week following the release of inflation and retail sales data.

Any reduction in interest rate hikes will be viewed favorably by the market, especially considering that a large number of assets are now trading at reasonable levels. Optimists anticipate the bitcoin rebound to $ 29,500 by the end of this week. Do not forget, however, that even while the Federal Reserve System dislikes surprises, the remarks of its representatives can greatly chill the market.

In addition, it is a positive development that the news of the sharp bankruptcy of huge hedge funds, cryptocurrency managers, and credit organizations, which became public this month, is gradually receding.

A recent interview with one of Celsius's former directors revealed that problems have been building for years, but no one has been in a hurry to resolve them.

Recent reports indicate that the largest cryptocurrency lender has filed for bankruptcy. According to analysts, many internal failures led to the cryptocurrency company's recent collapse. Several employees portrayed a picture of risk that was excessive, alluding to attempts to manipulate the market for financial gain. In an interview, Timothy Cradle, a former director of Celsius, stated that the primary issue was a failure of risk management. "I believe Celsius's concept of providing loans to organizations in desperate need was brilliant, but no one knew how to handle risks there."

The business froze consumer accounts a month ago, citing "extreme market conditions." In June, the company had 1.7 million users and $ 11.8 billion in deposits before filing for bankruptcy against the backdrop of the cryptocurrency market collapse.

Celsius secretly leased client-raised funds to hedge funds and other businesses eager to pay even larger profits. Additionally, the business invested in additional high-risk cryptocurrency ventures. As stated previously, the revenue model imploded alongside the price of cryptocurrencies, causing several organizations to freeze their assets and at least three to declare bankruptcy.

Eventually, all the "hype and dust" will settle down, and there will be people with money to invest in new cryptocurrency trends and directions, but investors and managers must draw the correct conclusions from everything, although greed, as always, will push them to succumb to temptation – only the strongest will survive. 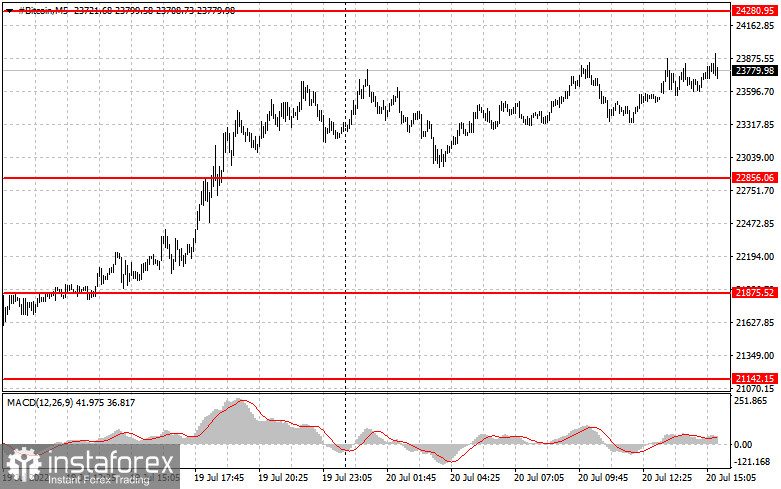 Regarding Bitcoin's technical prospects, the balance of power has shifted slightly. In the case of a collapse in the trading instrument, speculators will defend the closest support, around $ 22,875, which plays an important role. Its breakdown and consolidation below this range will cause the trading instrument to return to the lows: $ 21,875, $ 21,140, and $ 20,500, which are close to $ 19,880 and $ 19,320. In the event of a further upward reversal, bears will manifest in the region of $ 24,280 closest resistance. Fixing higher will drive the trading instrument to a new ceiling of $ 25,750, allowing investors to relax further. The region of $ 26,780 will be a more distant objective.

Ether remains in the limelight, with buyers concentrating on the $ 1,640 resistance level. Only once growth surpasses this level can we anticipate a bigger surge with an upgrade to the maximum of $ 1,740 and the possibility of a medium-term rise. A return to $ 1,740 and consolidation on that level will spur new purchases to update the $ 1,830 resistance, for which a fierce battle will resume. In the event of ETH pressure, bulls will attempt to defend $ 1,470. Based on this range's breakdown, it is prudent to anticipate purchases in the region of $ 1,385 and $ 1,320.