Bitcoin Price (BTC/USD) Falls And We're Wondering When The Bearish Market Ends... Weekly Crypto Analysis: Bitcoin Falls to Half Its Peak, Everything You Should Know Today | KuCoin

On Monday, cryptocurrency prices were in a slight bearish mode and the global crypto market cap was $1.60 trillion, down 3.36 percent from the previous day. Total crypto market volume fell 12.97 percent in the last 24 hours to $80.16 billion.

Algorand (ALGO) and TRON (TRX), which increased by more than 20% and 15% respectively, were two major contributors to the gains. So let's take a quick look at the latest crypto market news and the technical outlook of Bitcoin. 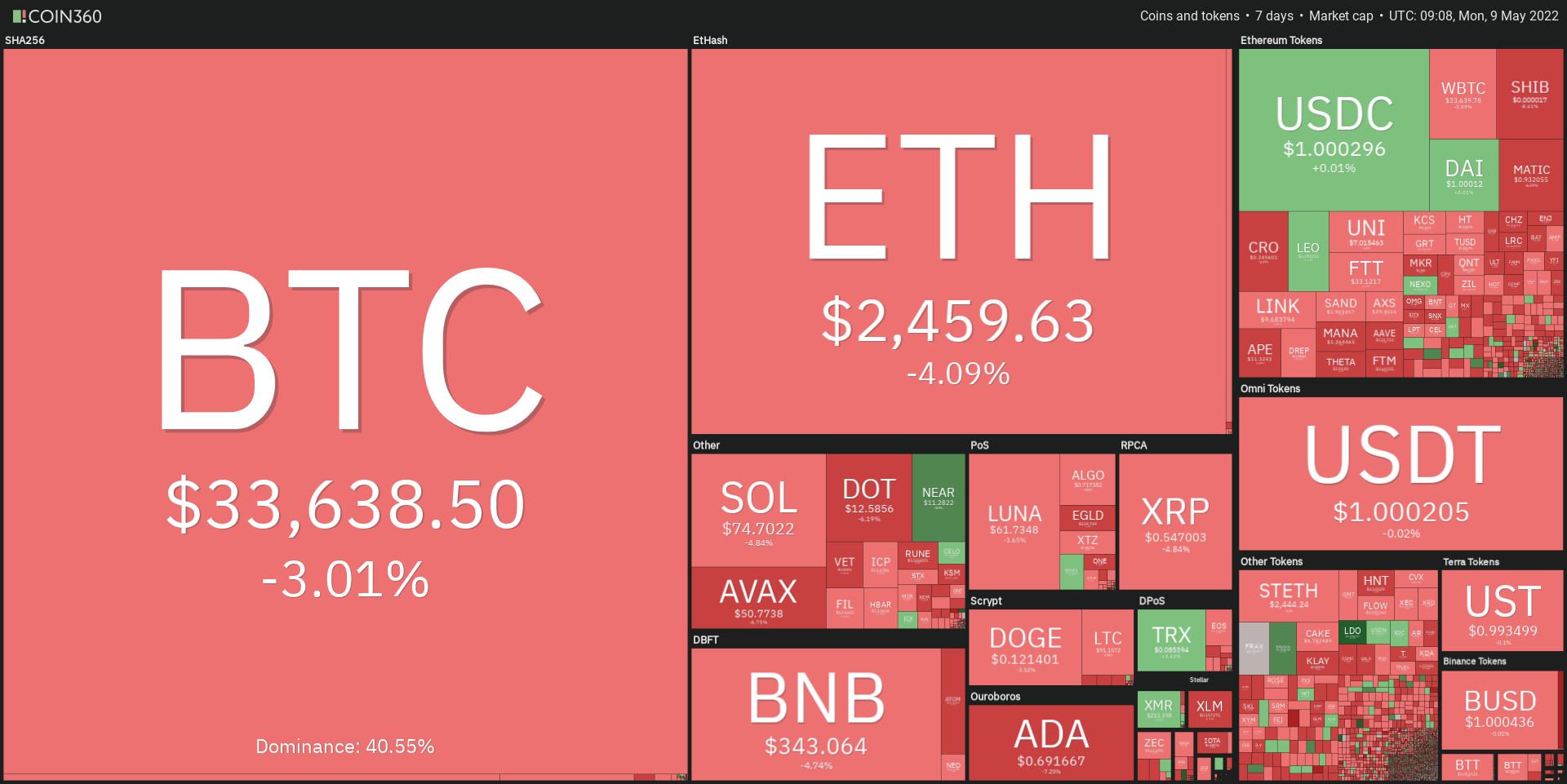 While ApeCoin (APE) maintained its bearish momentum, losing 31.72% to $11.14 in the last seven days. The crypto market's trading sentiment has shifted negatively due to risk-off sentiment, and digital assets are struggling to rise.

Klein Finance's project technology development is believed to be nearly complete, and the new funds will be used for project promotion and team expansion, as well as the subsequent opening of the technology and expansion of its structured products. Klein Finance's financing plan is said to be continuing.

Decentralized finance (DeFi) protocols have lost considerable value in the last month, with 17.77 percent shaving off the TVL in defi since April 8, 2022. Curve Finance, the largest DeFi protocol in TVL size, lost 16.55 percent in value over the last month, while Lido lost 13.28 percent. This month, Anchor's TVL is down 10.15 percent, Makerdao's TVL is down 20.48 percent, and Aave's TVL is down 21.12 percent.

Aave's version three (v3) and Tron's Sunswap protocols saw significant 30-day TVL gains. The TVL in defi has lost 6.25 percent of its value in the last 24 hours, and the largest protocol by TVL today is Curve Finance. Curve's $17.24 billion TVL currently leads the aggregate by 9.46 percent as of Sunday afternoon (ET).

However, the drop in TVL is putting additional pressure on overall crypto trading sentiment, driving a bearish bias in the cryptocurrency market.

Bitcoin is tossing in profit and losses at $33,366 amid risk-off market sentiment. Since February, it fell to its lowest level and has dropped around 14 percent since last Monday. The digital asset has fluctuated between $33,000 and $48,000 since the beginning of the year. It was the last trading under $32,000 in July. Ether, Avalanche, and Solana have all dropped this week.

Bitcoin has largely traded in tandem with tech stocks; both the coin and the tech-centric Nasdaq 100 reached all-time highs in November and have since been on a volatile downward path. The Nasdaq 100 fell for the fifth week in a row.

The Federal Reserve raised the fed funds rate target by half a point to 0.75 percent -1 percent during its May 2022 meeting, the second consecutive rate hike and the largest increase in borrowing costs since 2000, in an effort to combat rising inflation.

The central bank also stated that further increases in the target range will be appropriate, with Chair Powell indicating 50 basis point hikes in the coming meetings.

On June 1st, the Fed will also begin reducing asset holdings on its $9 trillion balance sheet. For the first three months, the plan will roll off $30 billion in Treasuries and $17.5 billion in mortgage-backed securities per month, increasing to $60 billion and $35 billion for mortgages per month.

On the economic front, policymakers noted that the invasion of Ukraine and related events are adding to inflationary pressures and are likely to stifle economic activity. Furthermore, COVID-related supply chain disruptions in China are likely to exacerbate.

The market's trading sentiment has shifted to bearish or risk-off, as investors seek to invest in risk-free securities rather than risky assets such as stocks and cryptocurrencies. With an increase in interest rates, companies that use debt financing must pay higher interest rates, reducing their profitability. As a result, investors who want to receive dividends or capital gains tend to sell their securities or stocks on the stock exchange.

Traders redirect their investments to less risky assets such as government bonds and treasury bills. As we recently learned, there is a positive correlation between the global stock markets and cryptocurrency prices. As a result, a drop in the stock market is causing a drop in cryptocurrencies.

Check out the KuCoin trading strategies for surviving a cryptocurrency crash.

The Crypto fear and greed index analyzes emotions and sentiments from various sources and condenses them into a single number. The Fear & Greed Index for Bitcoin and other major cryptocurrencies is calculated daily. The crypto market sentiment shows a score of 11, indicating a strong bearish sentiment across the investors.

On Monday, the fear and greed index continues to exhibit extreme fear, indicating a bearish bias among cryptocurrency traders is getting weaker. Extreme fear can indicate over-anxious investors. It could be a good time to buy as cryptocurrency markets are in an oversold zone. So, look for buying positions as the bulls may enter soon.

Bitcoin is trading at $33,600, with a strong bearish bias. On the daily timeframe, the BTC/USDT is heading south to retest the major support level of $32,990. Since the BTC/USDT has formed a bearish engulfing pattern, the odds of a downtrend continuation remain pretty high.

Furthermore, the candlestick pattern "Three Black Crows" also signaled a solid bearish trend. The RSI and MACD are holding under 50 and 0, respectively, indicating a selling trend. Hence, a downward breakout of the 32,990 support level exposes the BTC/USDT price towards the $29,050 level. 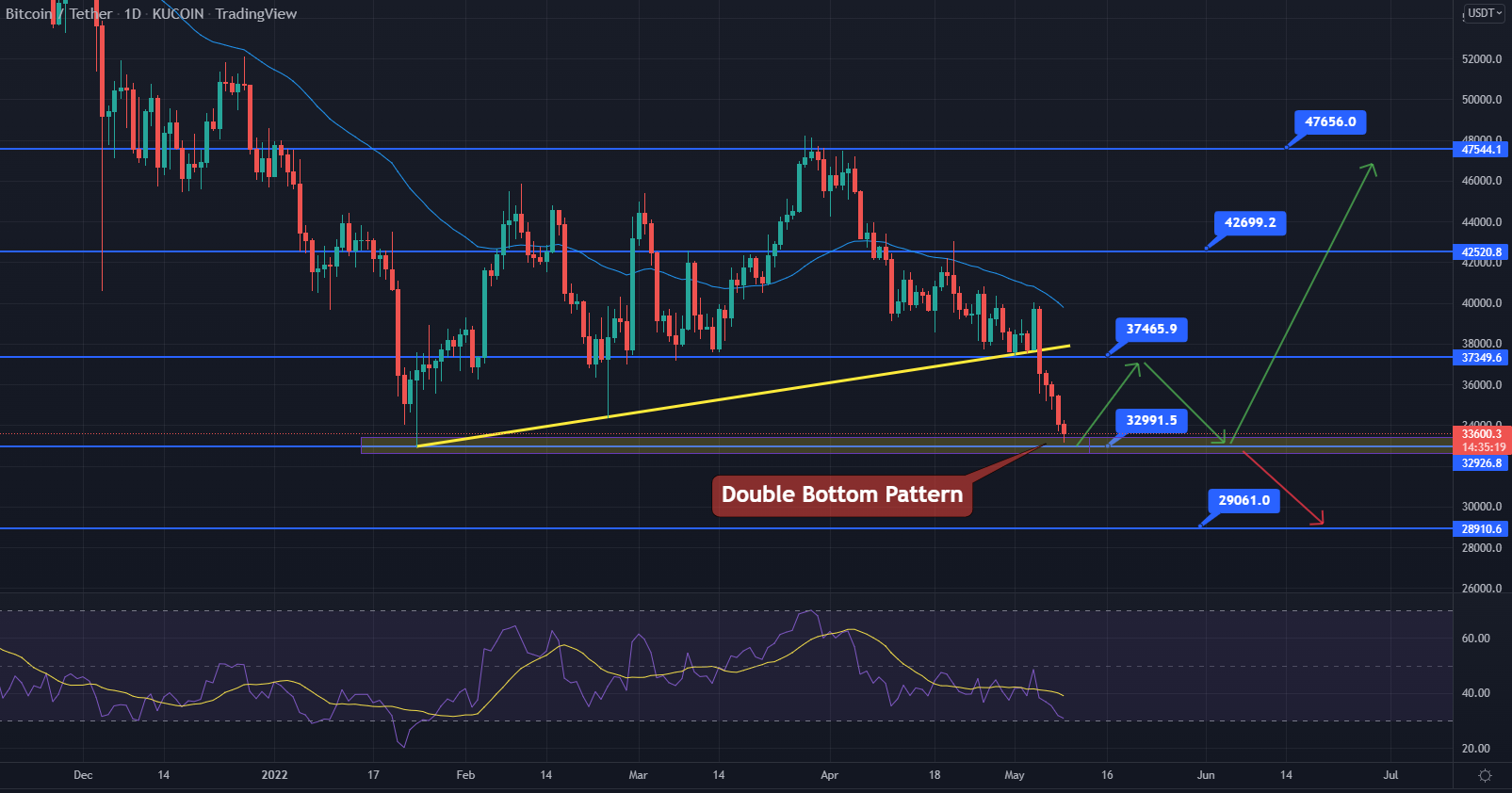