Bitcoin has shaken the global financial system to the core. Once it entered mainstream markets in 2009, we began to see a growing shift from government-backed fiat to modern cryptographic payment systems operating in a secure and trustless manner.

So, why isn’t Bitcoin an everyday currency?

Bitcoin’s scalability is limited due to high fees on its network and increased transaction latency. However, its biggest challenge is its use of a proof of work (PoW) consensus mechanism that relies on miners using energy-heavy equipment to confirm transactions.

Mining Bitcoin is wearing the environment down. We need more sustainable alternatives to Bitcoin, and Nano fits the bill.

But is Nano cryptocurrency better than Bitcoin? Let’s find out.

What Is Nano Crypto?

Nano is a fast, energy-efficient digital currency designed to facilitate the near-instant transfer of funds in a frictionless, secure and trustless manner at zero fees. Its software aims to provide an inflation-resistant, decentralized peer-to-peer virtual currency that can be sent, spent or accepted anywhere around the globe in a highly convenient way.

Unlike Bitcoin, Nano doesn’t need to be mined or printed, which makes it a sustainable and value-driven payment option. Its unique design departs from traditional blockchain technology and applies a block-lattice architecture that ensures speedy, low-cost transactions.

Nano coin was founded in 2014 by software engineer Colin LeMahieu under the name RaiBlocks, with the token ticker XRB. However, the project rebranded to Nano (NANO) in 2018 and changed its token ticker from NANO to XNO in 2021. As the native currency for the Nano ecosystem, XNO is used as a medium of exchange and helps facilitate various operations on the network.

In contrast to most tokens created during that period, Nano didn’t hold an initial coin offering (ICO). Instead, it used a system called the Nano Faucet to distribute its coins. Similar to an airdrop, the Faucet system allowed anyone to complete CAPTCHA tests and get rewarded with free Nano coins.

Since the Faucet didn’t require an up-front monetary investment, the Nano project was able to reach people in emerging economies in line with its mission to solve real-world problems on a global scale. A total of 133,248,297 Nano coins were distributed using this system between 2015 and 2017. The maximum supply of Nano crypto is finite and is fixed at 133,348,297 coins, with the undistributed coins burned.

To stand out from Bitcoin, Nano was designed with its focus on scalability, financial inclusivity, energy efficiency and decentralization, with a Nakamoto coefficient of 11. To achieve this, the Nano blockchain implements a sophisticated interplay of a unique protocol design and node implementation. The facets of Nano’s operations are as follows.

To achieve consensus, Nano uses a system called Open Representative Voting (ORV), which is a variation of the delegated proof of stake (DPoS) algorithm. As one of the earliest adopters of directed acyclic graph (DAG) design, Nano broke away from the typical blockchain mold in order to enhance security and improve system performance.

Since ORV allows individual processing of transactions, finality is achieved quickly — typically in less than a second — which is much faster than Bitcoin. ORV consensus doesn’t require the energy-intensive mining of coins that’s required on traditional PoW blockchains. 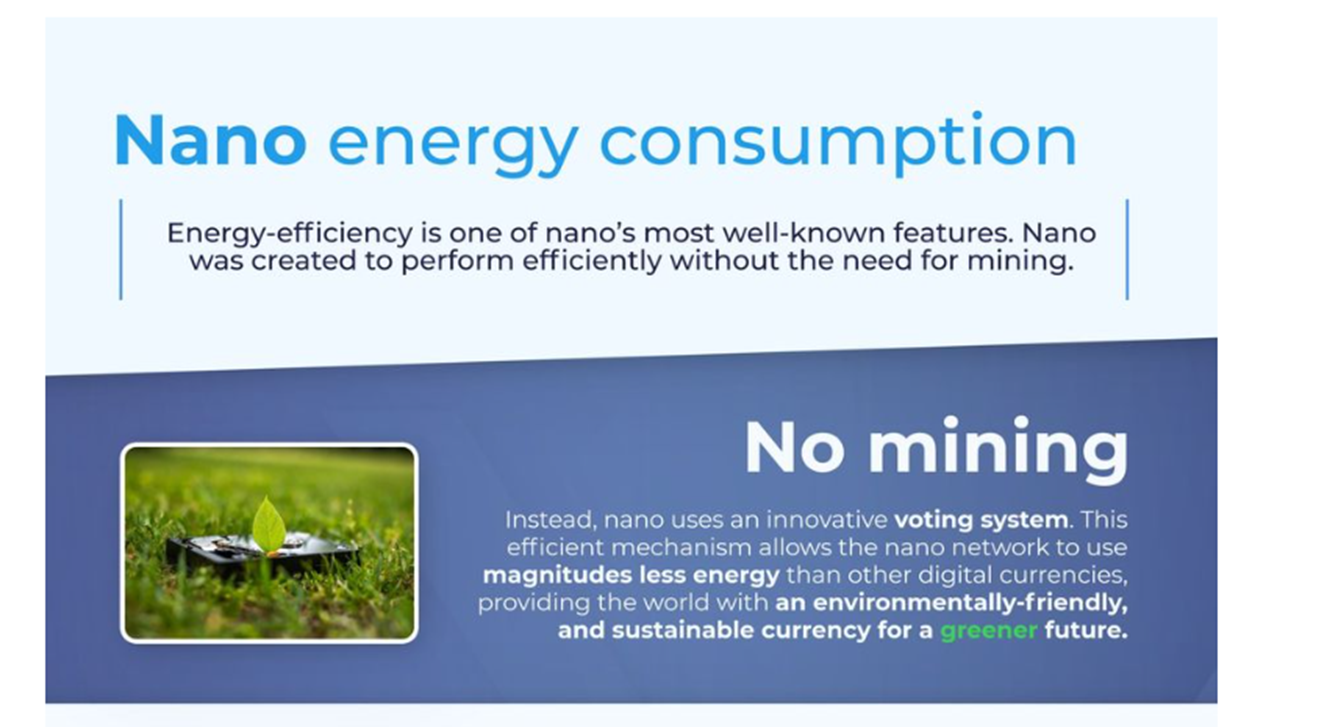 In a normal blockchain, for example Bitcoin, each block of transaction data is linked to the next, which delays the confirmation of transactions, since the processing of transactions is sequenced in order to be added to the public ledger. 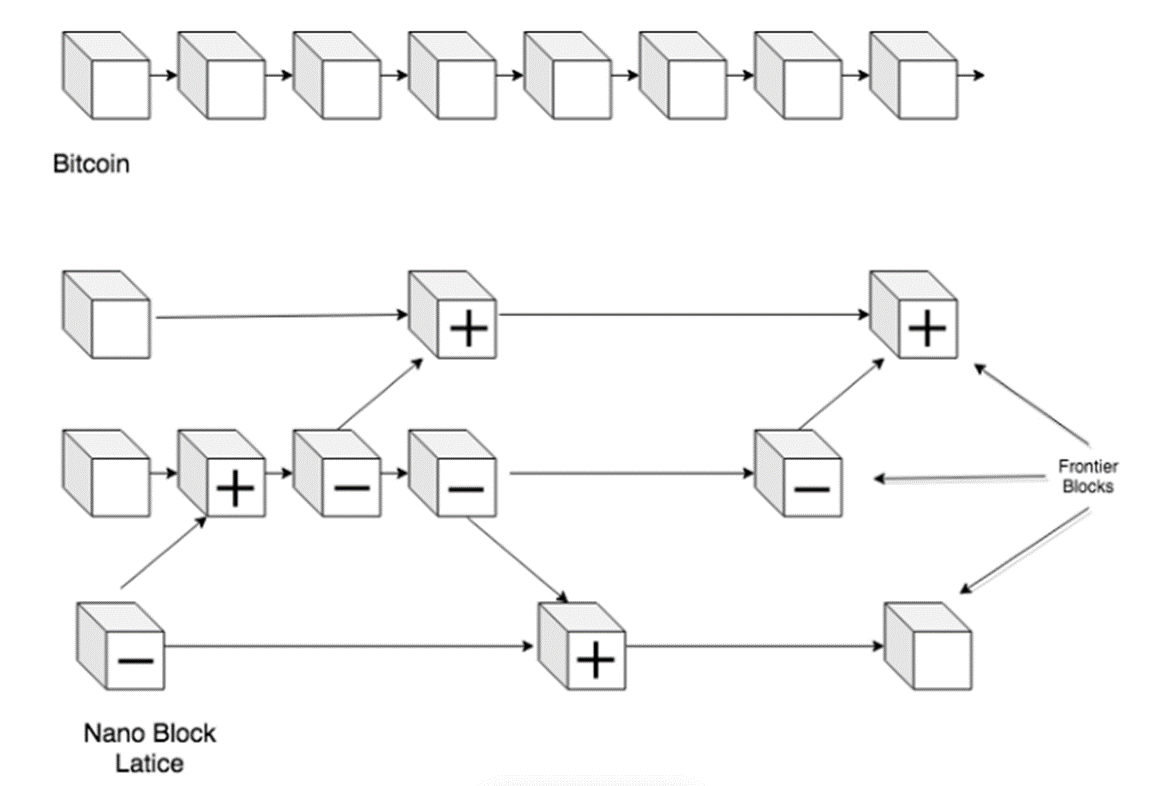 With block-lattice design, all data regarding a transaction are grouped into a single-state block, and blocks can be processed in parallel at the same time. Account holders can also modify their account chains without affecting the entire network. To authorize a block, a digital signature needs to be combined with the private keys of the account owner.

What Are the Uses of Nano Crypto?

Nano crypto is designed to provide real-world utility as an easy-to-use and near-instant payment system. As such, it acts as more of a currency than a speculative asset. Its eco-friendly, sustainable design gives it diverse use cases in the wider global economy, described below.

Since Nano is instant and doesn’t attract any transaction fees, it’s a great alternative to fiat currencies. Backed by blockchain technology, Nano is decentralized, private, secure, transparent and free from government restrictions. Its fixed supply makes it non-inflationary, which ensures it’s stable and equitable. 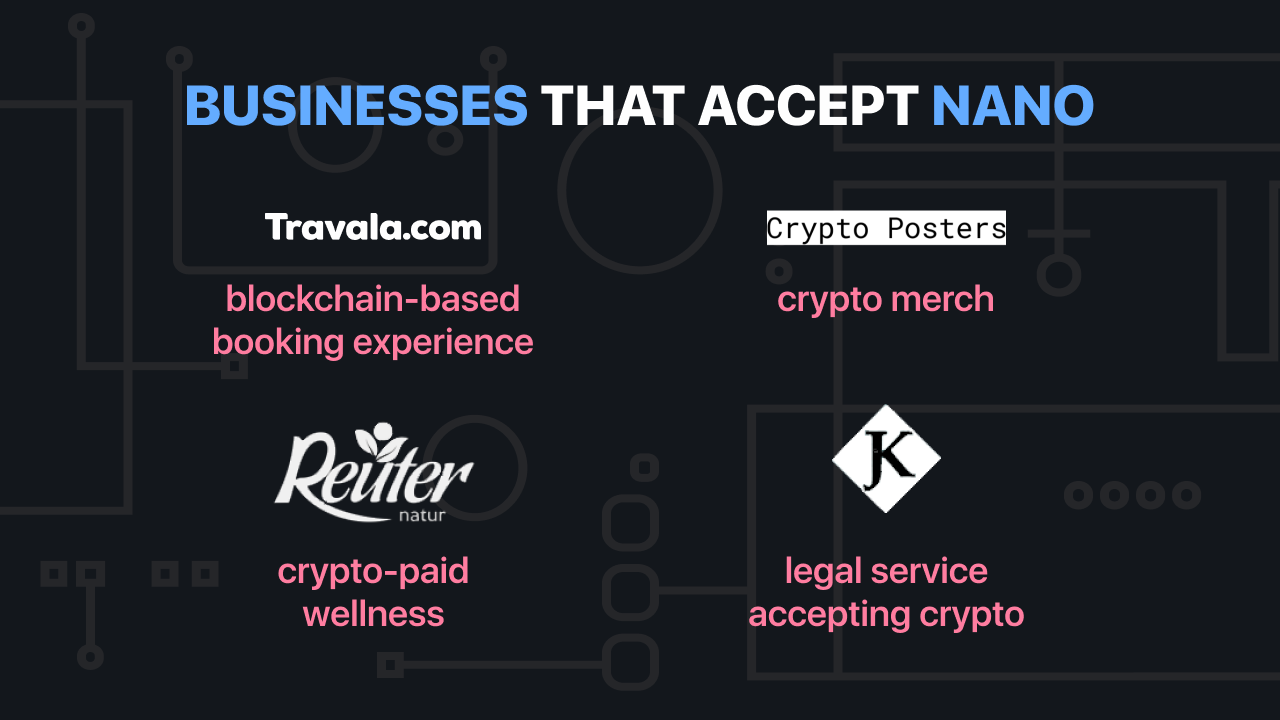 Traditional money remittances using bank transfers are lengthy and expensive. Even worse is the flawed foreign exchange rates, which can at times also eat into the amount sent or received.

However, cryptocurrencies such as Nano have made the global transfer of funds quicker and less costly. With Nano, you won’t incur any hidden fees or manipulated forex rates, and you’ll be sure that 100% of the value is received on the other end. 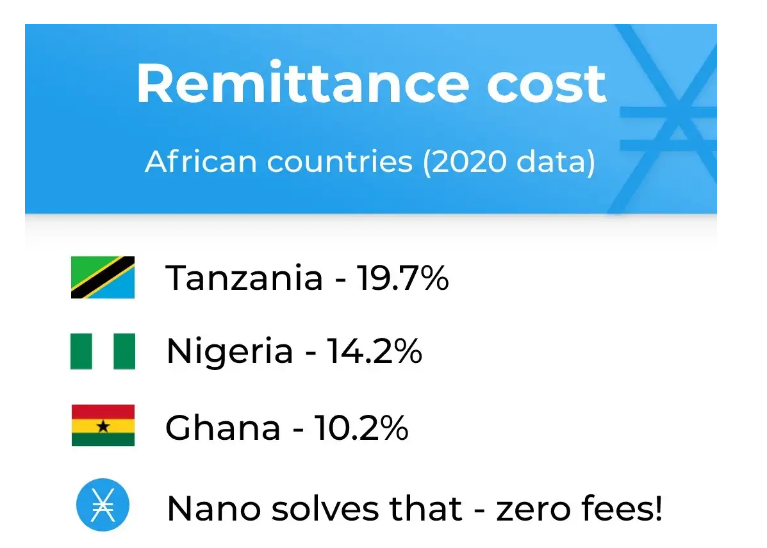 Every merchant wants to keep costs to a minimum, since most businesses operate on slim margins. By using Nano, merchants can bypass credit card processing fees which often eat into their profits.

Nano crypto payment gateways such as NOWPayments and Nault are less expensive than traditional payment platforms. By integrating Nano payments, merchants can receive funds from anywhere around the globe. Since Nano is a feeless payment system, it’s ideal for processing microtransactions. For example, with Nano, you can make micropayments such as tipping a streamer on Twitch. You can also use Nano Tip Bot to tip content that you like on Twitter or Telegram, or even use KarmaCall to block spam calls. Due to high fees, such small transactions are convenient when using regular payment processors.

Since no additional XNO coins can be mined or minted, Nano also acts as a secure and non-inflationary store of value. Central banks can increase traditional currencies’ supplies, thereby devaluing them.

However, by holding Nano, you’re cushioned from inflation and government interference. You can store Nano in wallets such as Nautilus Wallet, GoNano, Exodus, Guarda and Atomic Wallet.

Nano vs. Bitcoin: Which Is Better?

While both of these cryptos are secure and decentralized virtual currencies, Nano has proven to be an improved version of Bitcoin. Unlike Bitcoin's PoW mechanism, which strains the environment, Nano’s design is eco-friendly and sustainable. 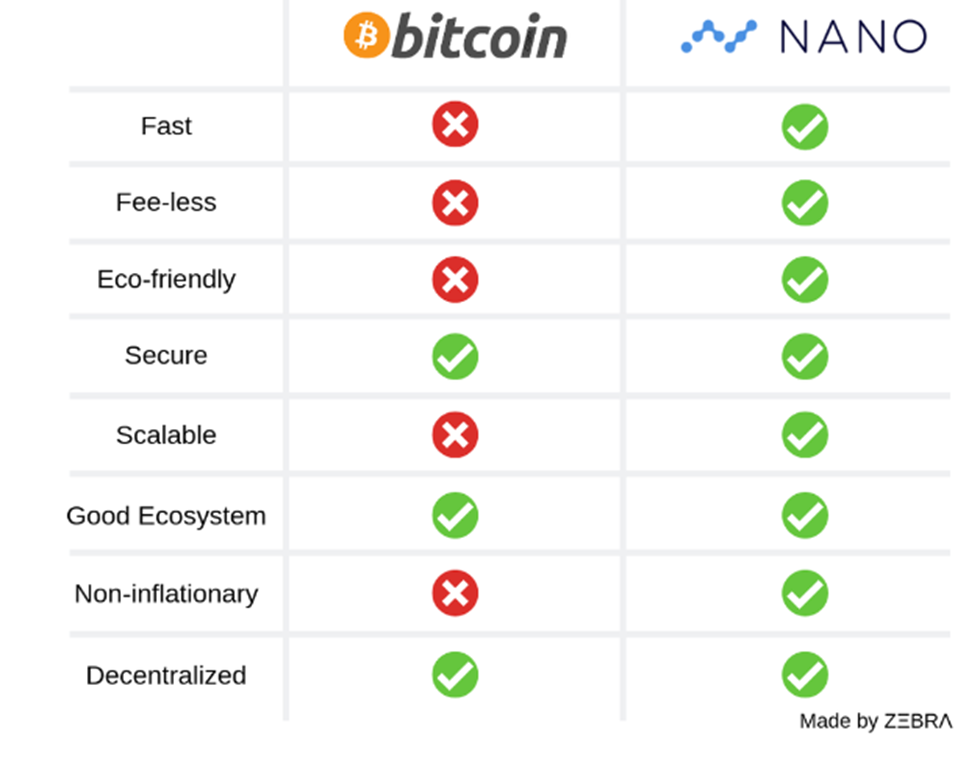 Toward the end of the month there were rumors of a possible hack on the BitGrail crypto exchange (now defunct), as well as the attack’s reported effects on RaiBlocks wallets. After confirmation of the BitGrail hack — and amid RaiBlocks’ rebranding to Nano (NANO) on January 31, 2018 — NANO began dumping and fell to a low of $7.37 on February 21.

The coin’s price didn’t recover from the impact of the BitGrail misfortune and continued falling to below $1 in August 2018. Subsequently, its price stagnated for most of 2019 and 2020. However, Nano started pumping at the beginning of 2021 as its coin rose from around $1.00 in January to $14.72 in mid-April. In mid-November 2021, the NANO ticker was rebranded to XNO. 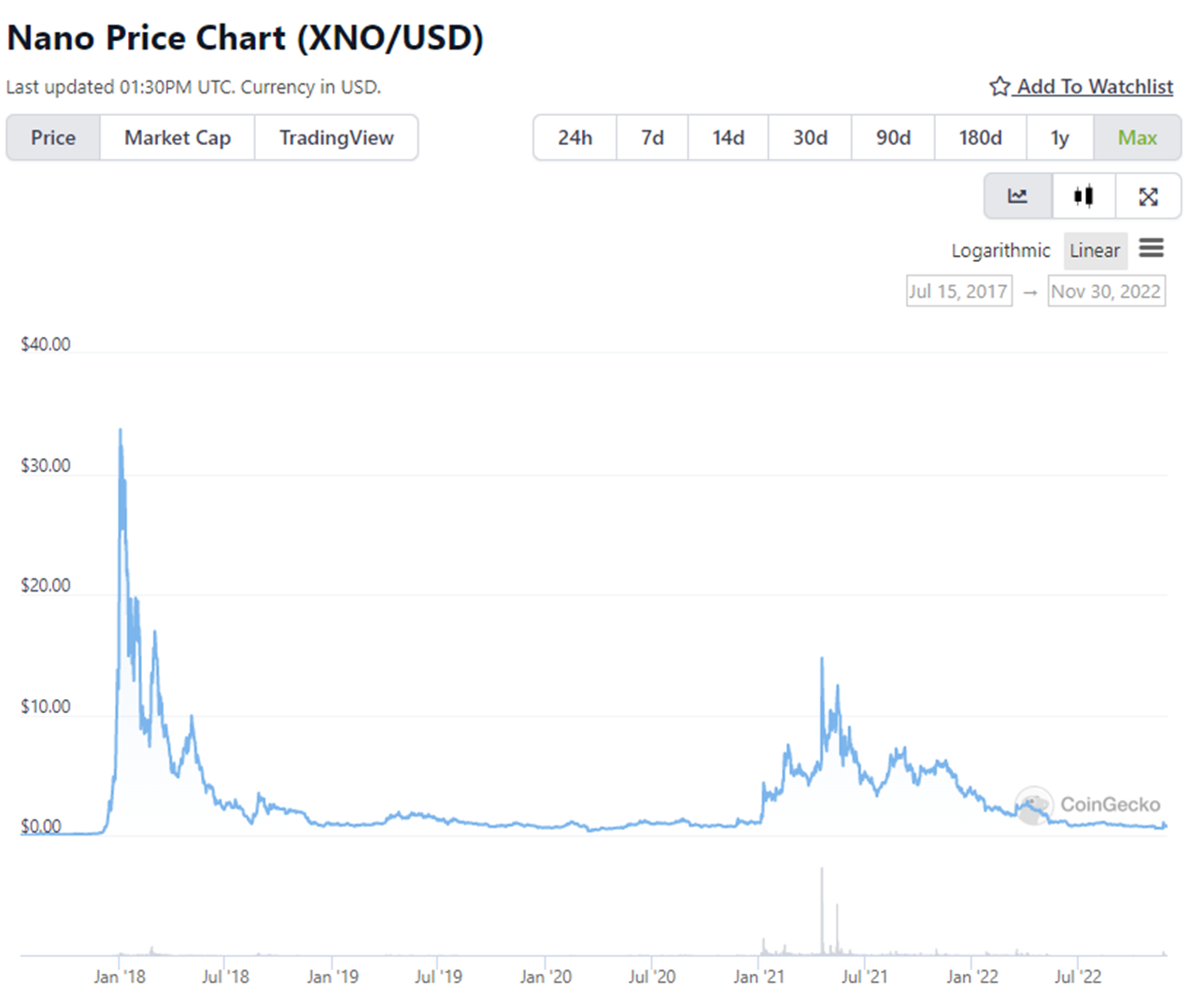 Various price forecasting experts have offered positive predictions for the Nano coin price. Digital Coin Price’s experts believe the crypto could hit $3 in 2025, and cross $10 by 2030. Similarly, Price Prediction also anticipates that XNO’s price could reach a maximum of $3 in 2025 and leap to over $16 by 2020.

Nano cryptocurrency's eco-friendly design makes it attractive to the ever-increasing legions of environmentally conscious crypto enthusiasts. Its sustainable, feeless and speedy confirmation of transactions rank it as a good alternative to Bitcoin.

That said, the crypto market is highly volatile and carries a considerable amount of risk. Therefore, it’s critical to do your own research before buying XNO or any other digital currency.

Nano has developed a platform that tackles the challenges of scalability and latency facing many other digital currencies. As a DAG-based cryptocurrency, Nano provides instantaneous confirmation of transactions through a block-lattice structure and Open Representative Voting consensus mechanism.

There’s increasing demand for energy-efficient cryptocurrencies, and XNO ranks high on the list of green cryptos that are viable alternatives to Bitcoin. Nano’s instant, feeless and sustainable system will help scale the project toward achieving its vision of being a leading digital cash payment system.

Source: What Is Nano Crypto: The Eco-Friendly Choice to Watch | Bybit Learn